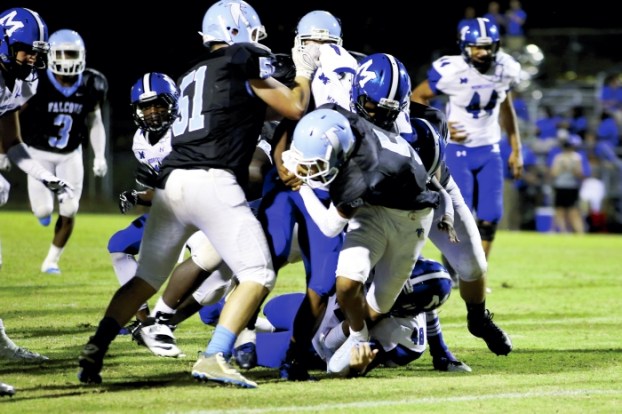 North Rowan defensive end Zion DeBose is a Division I commit (Appalachian State) and the reigning Central Carolina Conference Defensive Player of the Year for a reason. Looking bigger, stronger and even faster than he was a year ago, DeBose turned in a spectacular performance in the Cavaliers’ 28-14 win against East Rowan to open the season.
DeBose stuffed running backs (once for a safety), hurried and sacked quarterbacks, recovered a fumble and even made a tackle on punt coverage.
•••
North Rowan senior lineman Steven Thurston was as good as advertised on opening night, playing very well on both sides of the ball. Thurston plowed holes for a surprisingly strong running game at left guard and showing increased defensive range. Thurston looked quicker in his pursuit of quarterbacks and he made a tackle on a pass play on the sideline, which is not something you’d expect from the big nose guard.
•••
North’s all-county DB Chris Clodfelter lost a pick-6 due to a penalty flag.
•••
North started the season with a victory for the fifth straight year and won its sixth straight in its rivalry with East Rowan.
•••
Junior Jacob Young won the kicking game for North on Friday. He punted for respectable distance. He put his kickoffs in the end zone and booted two PATs and two field goals.
The field goals were the seventh and eighth of his career for Young, who was second team all-county last season behind South Rowan’s Catawba signee Brennan Lambert.
Young kicked two field goals in a game for the second time. He has scored 85 points in his career, and he should give North a kicking-game edge most Fridays.
•••
With 248 rushing yards, North had its most effective attack since it rushed for 270 yards against Salisbury in 2014.

East Rowan
North’s defense walled in East’s speedy running back Max Wall.
Wall needed 67 yards to break the school’s career rushing record, set by Cal Hayes Jr. in 2001, but he was limited to 23 yards by the Cavaliers. So he still needs 44 yards heading into Friday’s game at Salisbury.
Wall, who had 96 rushing yards against North as a junior, was tackled for loss several times, as East had little success running away from DeBose or straight at him.
Wall played both ways and made an interception on defense, but his long night included hobbling off the field at one point, favoring a sore ankle.
•••
Senior cornerback Wesley Porter led East’s effort on Friday on defense and special teams, and he added a touchdown catch.
•••
East’s defense got enough stops to win a lot of games and twice held North two field goals when the Cavaliers appeared certain to punch in touchdowns.
But East couldn’t move the ball at all in the first half. The only first down in the first half for the Mustangs wasn’t a chains-mover. It was simply a statistical first down on Tate Houpe’s 40-yard TD pass to Franklin Downing.
•••
Downing, a senior who had a coming-out party , was the bright spot on offense for the Mustangs with four catches.
•••
Houpe’s season as a punter got off to a rough start, but then he boomed a 50-yarder with a lot of hang time that showed his potential.

West Rowan
While beating West Rowan three seasons in a row, Mooresville piled up big rushing numbers, including 356 yards in 2014 and 285 last season.
But in a 12-8 defensive-minded victory to open a new season, the Falcons held the Blue Devils under 100 rushing yards. West bottled up Mooresville senior Donshel Jetton (14 carries, 57 yards), one of the best backs the Falcons will face this season.
•••
West lost the turnover battle (2-0) on Friday but won the game.
West’s defense forced six punts — the Falcons punted only once — and allowed only one pass completion.
•••
Armoni Hogue, who has been a starting cornerback at Carson in recent seasons, was West’s leading receiver with four catches for 83 yards and was the key target for new QB Kortez Weeks.
•••
West running back Javon Quarles was a workhorse on Friday, carrying a career-high 31 times for 130 yards. It was the fifth 100-yard rushing game of his career.
Quarles’ previous high for carries was 23 in last season’s tough win against Robinson. Quarles career-best for rushing yards was 177 against Hickory Ridge when he was a sophomore in 2014.
Quarles, who had 720 rushing yards as a junior and 651 as a sophomore, went over 1,500 rushing yards for his career on Friday.
Quarles added the first TD catch of his career. He caught only one pass last season.
•••
Two former West Rowan players are now the top two quarterbacks for Statesville.
Jai Hogue, a DB/receiver who had a kickoff return TD for the Falcons last season against West Henderson, started for the Greyhounds on Friday in a 40-20 win against Hickory.
Hogue, a senior, threw for 170 yards and had five rushing TDs.
Bryant Young, a junior, was 7-for-9 passing for 30 yards and added a rushing TD. Young, son of former West Rowan coach Scott Young, landed at Statesville after the recent events at Independence.
Statesville has a game coming up against North Rowan.
Statesville also will be in the same league in 2017 as West Rowan, East Rowan and Carson.
•••

South Rowan
South lost 33-9 to Salisbury, the Raiders’ 11th loss in their last 13 season openers.
The two wins?
South Rowan kicked off the 2009 season with a win against the Hornets and opened the 2014 season with an upset of South Iredell.
•••
Defensively, South did a lot of good things against Salisbury, forcing two turnovers and five punts. From a yardage standpoint, it was not a lopsided game, but it’s not possible to overcome seven turnovers.
•••
Junior Sayquan Anthony has a chance to be an outstanding back for the Raiders. His 100-yard game against Salisbury was the first 100-yard outing by a South back since sophomore Jamorya Cousin had 25 carries for 143 yards in South’s win over East Rowan in the 2014 finale for the Raiders. That turned out to be Cousin’s last game at South.
He transferred to Graham High in Bluefield, Va., and rushed for 1,856 yards for the G-Men as a junior. Now a senior, he’s being recruited by Division I schools.

Salisbury
Salisbury DB JaQuan Davis made an interception in Friday’s 33-9 win against South Rowan and shared Salisbury Defensive Player of the Week honors with Tyvion Wood, who had two interceptions.
Salisbury didn’t name a player of the week for special teams.
Isaac “Trell” Baker scored three touchdowns, two on long pass completions by Griffin Myers, and was named Offensive Player of the Week.
•••
Salisbury was just one of five Central Carolina Conference teams that won on opening night.
•••
Senior linebacker/running back Cameron Horne had an eventful night for the Hornets, scoring a two-point conversion and recovering a fumble.
•••
Salisbury’s Byron Goodlett had an interception and a fumble recovery on opening night.
He was a big factor as the Hornets created seven turnovers, the most for Salisbury’s in the last two decades.

A.L. Brown
Coach Mike Newsome announced weekly award winners for Thursday’s 31-19 win against Concord.
Elijah Hall, the defensive line anchor for the Wonders, created all sort of problems for the Spiders and was honored as “Hawg of the Week.”
Steven Howie, an outside linebacker who had the game-clinching pick-6, was the choice for Defensive Player of the Week.
Cornerback Nakohr Wise was another candidate. He was involved in some big turnovers, including a strip of Concord’s South Carolina commit Hamsah Nasirildeen near the goal line.
Offensive Player of the Week was running back Jahia Mahatha. He scored the two short touchdowns in the second quarter following turnovers that transformed a 13-7 deficit into a 21-13 lead.
Special Teams Player of the Week was punter Kevon Jacobs, whose night included unloading a 55-yarder at a critical juncture.
“Hitman of the Week” was strong safety Cinsere Allison, who might be “Hitman of the Week” every week.
The “Captain Award” went to backup QB Zach Williamson, who was thrown into the fire when starter Cordarius Butler went down and did an admirable job of managing the game.
•••
Differing statistical totals have been been posted by various sources for exactly how many rushing yards Concord lost in the game, but everyone agrees the Spiders had negative rushing yardage. Concord’s official stats say the Spiders rushed for minus-23.

Davie
In Davie’s wild 39-29 win against Greensboro Page on Friday, the War Eagles scored the first 16 points, allowed 29 unanswered in the middle two quarters, and then won the fourth quarter, 23-0.
This was just the latest installment in a crazy series. Davie has opened with Page the last six seasons and has gone 3-3 against the Pirates despite being outscored, 209-166.
Davie has won the even-year contests, and those have been the road games for the War Eagles.
•••
Junior receiver Cooper Wall’s staggering opening-night effort — career highs of 11 catches and 235 yards — included the 14th and 15th TD catches of his career.
Wall already has 103 career receptions for 1,690 yards, and he’s barely halfway through his career.
•••
Senior QB Chris Reynolds threw for 294 yards opening night. He boosted his career total to 31 TD passes and he surpassed 3,000 passing yards.
•••
Defensive and special teams standouts for Davie on Friday included linebacker Broc Barnette, who blocked a punt and recovered a fumble, and defensive end Jalen Redmond, who forced a fumble.