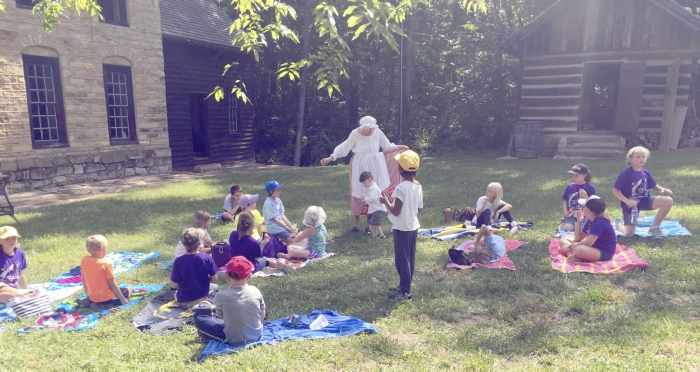 Submitted photo Each Rowan Museum Summer Camp spends one day at the Old Stone House near Granite Quarry. The house is turning 250 this year and the museum is hosting a special event to celebrate on Sept. 17.

SALISBURY — Michael Braun built up a fortune when he lived in Rowan County back in the 1700s. He was a wagon maker, wheelwright, general carpenter and also owned a printing press, which he used to print German Bibles.

What he is most importantly known for, at least for the people of Rowan County, is building the Old Stone House near Granite Quarry.

From 10 a.m. to 1 p.m. the Brown-Fisher Association will be having a family reunion at the house. Afterwards from 1 to 4 p.m., there will be activities, re-enactments and tours for visitors, as well as presentations about the house and German culture to honor Braun’s homeland of Germany. The cost of that portion of the day is $3 for adults and $1.50 for children.

Starting at 4 p.m. and lasting until 8 p.m., there will be a special German Festival with German food, beer, wine and music from the Windsong Recorder Ensemble. Tickets for that part of the event are $35.

The Old Stone House’s history begins when Michael Braun moved to the U.S. with his family from Germany when he was around 5 to 7 years old, according to Aaron Kepley, executive director of the Rowan Museum.

After living in Pennsylvania for a time, in the late 1750s Braun moved to North Carolina and lived in Rowan County.

Being a wealthy man, Braun purchased 274 acres of land and built the Old Stone House with his sons in 1766 and Kepley said it was probably completed around this time of year.

The Georgian house is two stories and is the oldest structure in Rowan County, according to the Rowan County website. It is also one of the only stone houses that was built in the 18th and early 19th centuries still standing in the state.

Braun died in 1808, and the Old Stone House was passed down through family. It was used as a rental property after the Civil War and left abandoned in the early 1900s.

The house was used as a campsite for Boy Scouts and other groups. People actually lit fires inside of the house and burned the floors. They also burned the stairs of the house, so while the lower floor was damaged, the upper floor remained intact. There is a loom from the original house that visitors can see today because it was on the upper floor.

By the 1950s, the house was in danger of being torn down so its rock could be use to build roads. The Braun family, who changed the spelling of their last name to Brown, and Fisher family banded together to buy and restore the house.

After extensive renovations, the families eventually gave the house to the Rowan Museum in 1966 in the 200th year the house had been standing.

The Rowan Museum has been able to keep the house standing for the past 50 years.

The house is open for tours from April to November on Saturdays and Sundays from 1 to 4 p.m.

For tickets to the special Old Stone House anniversary celebration, contact the Rowan Museum at 704-633-5946.