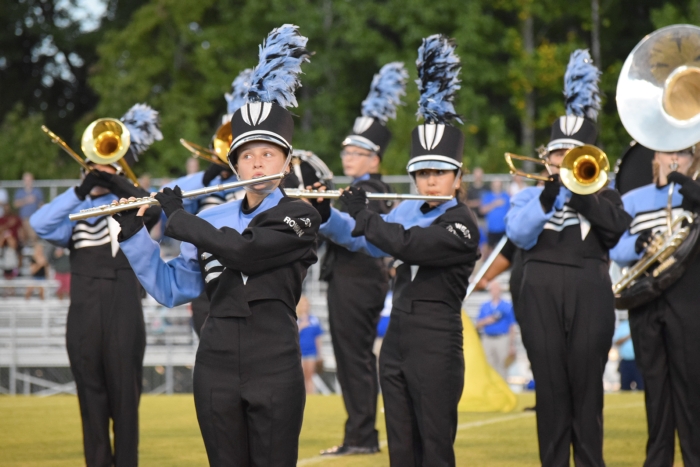 MOUNT ULLA — Sarah West tugs on the black sleeve of her marching band uniform as she gets ready for Friday night’s game.

West is a freshman at West Rowan High School, so she doesn’t know how true that statement echoes for older members of the band. For upperclassmen, the black and blue uniforms have been a long time coming — nearly 10 years, in fact.

The band’s old uniforms were 17 years old. Marching band uniforms are meant to be replaced after 10 years.

“They were falling apart,” Mackenzie Koontz, a senior, said.

The old white and blue uniforms were missing buttons and had rips and stains that no amount of cleaning or sewing could remove. Band Director Daniel Trivette said the band’s uniform crew have been “frankensteining” uniforms for years — building and holding them up with tape and thread. And finally, their luck ran out.

“It was a smoke and mirrors game for the last five years of making us look like an outfitted band, and eventually you’re just out of tricks to do it,” Trivette said in April.

Last spring, Trivette said if the band wasn’t able to get new uniforms they’d be marching in shorts and T-shirts come fall. But new duds don’t come cheap. A single uniform costs about $400 — times the 60 uniform minimum needed to ensure that every member was decked out, there was a more than $25,000 price-tag.

Bands will typically put back some money each year to buy the next batch of uniforms — but West Rowan hasn’t had that luxury.

When Trivette started as band director 10 years ago, the program was about $5,000 in the hole. His first three years were spent getting the band to break even, and uniforms took a back seat.

When the band finally got a break three or four years ago, it ran into another problem: funding sources. Many bands have a steady source of funding from running a concessions stand – but West Rowan’s doesn’t. Instead, students do several annual fundraisers. Trivette says the group sells West Rowan gear, sells donuts, runs a fifth grade back-to-school dance, and has an annual mattress sale. Once, they considered selling toilet paper.

In spring, the band was still about $5,500 short, but with a last push for fundraising and some last-minute donations, they’ve cleared the hurdle.

“It did happen, it did take place,” Trivette said.

The band received donations from school administrators, Freightliner, Water Infiltrator Systems and the West Rowan classes of 1966 and 1967.

“We’re very humbled by the generosity of the community,” Trivette said.

On game night, the band room was full of chatter as students stepped into their bibs, or zipped themselves into the blue, black and silver jackets.

“It feels good to be back in one,” Alex Ho, a junior said.

Last year, Ho and his fellow percussionists marched in T-shirts.

Leighann Brooks also didn’t have a uniform last year — her first year in marching band — but she heard that they were hot and itchy.

“I think they are amazing,” she said of the new uniforms.

And the fight’s not quite over. In order to ensure that every student has a uniform that fits properly, and to have emergency extras, the band will need 20 more uniforms, for a total of 80. Trivette estimates the extra uniforms will cost the band an additional $9,500.

“It’s nice to see it come closer to completion,” he said.