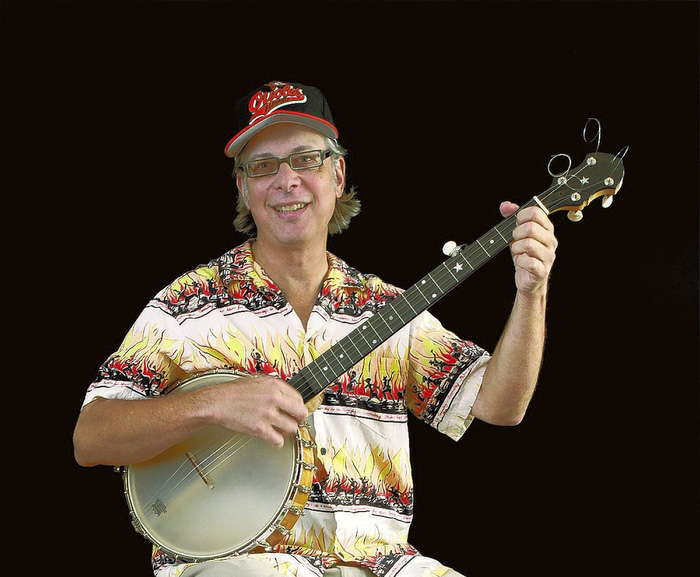 Photo by Matthew Spencer Well-known clawhammer banjoist Bob Carlin of Lexington will perform next Tuesday evening at Rowan Public Library in Salisbury. He also will be selling and signing copies of his new book 'Banjo: An Illustrated History.'

SALISBURY — If Bob Carlin were thinking of post-World War II banjoists to put on a Mount Rushmore, he says the faces carved in stone would have to include Earl Scruggs, Bill Keith, Bela Fleck and Pete Seeger.

In fact, it was a Pete Seeger concert where a 5-year-old Carlin, a well-known player today in the clawhammer style, was first introduced to the banjo and began his lifelong appreciation for the instrument and its history.

But when it comes to naming a Mount Rushmore list of banjo players for the pre-war period, Carlin hesitates, because he wishes he could include African or African-American players.

“But those names are lost to history,” he says.

Carlin knows quite a lot about that history. His recent book, “Banjo: An Illustrated History,” traces the instrument’s roots back to Africa and follows its progression and evolution to modern day performers and manufacturers.

Carlin, who lives in Lexington and previously toured with the late John Hartford, will offer a concert and book-signing at 7 p.m. Tuesday at the Rowan Public Library, 201 W. Fisher St.

The event, part of the Friends of the Rowan Public Library and Cheerwine Concert Series, is free and open to the public. It will be held in the library’s Stanback Auditorium. Doors open at 6:30 p.m., with the show starting at 7.

Carlin says he will be selling and signing his book between two 45-minute sessions on the banjo, during which he also will be sharing many of his historical insights into the instrument.

“I do it all to honor the people who came before us,” Carlin says.

The clawhammer style of playing a banjo is the oldest, Carlin says, and it relies on down-picking with the thumb staying on the fifth string. It is most directly tied to the African way of playing lutes or the akonting.

“The very first banjos were originated from West African lutes brought over by slaves traveling to American plantations,” Carlin writes in his introductory paragraph to Chapter One.

“Crafted from gourds and reshaped by these new African Americans, the lute morphed into the banjo we know today. By the outbreak of the Civil War, these innovative instruments had become imbedded in American culture, but their African roots are still celebrated.”

Carlin says his book, with scores of photos and illustrations, is a culmination of all the books, magazine articles and original research he had done beforehand. Those efforts dealt with specific times in banjo history.

When it came to writing this book, Carlin says, it was easy for him to draw up a list of the photographs he wanted to include and the different topics of the chapters.

From beginning to end, the project probably took four to five years. “Once we got moving,” Carlin adds, “it was pretty easy for me.”

His “Birth of the Banjo” book took 10 years of original research “because the information wasn’t out there,” he says. He found himself combing through unindexed microfilm and traveling to England to peruse original documents for that work.

In “Banjo: An Illustrated History,”  Carlin writes of the early African influences; Scott Didlake and gourd banjos; early white banjoists such as Joe Sweeney, a minstrel who brought the folk banjo to international consciousness; the banjo’s role in the Civil War; the Virginia Minstrels, who combined a fiddle, banjo, bones and the tambourine; a “banjo boom” between the Civil War and dawn of the 20th century; and Gibson and other manufacturers’ introduction of a new type of banjo.

Carlin describes how the banjo was at the heart of rural American music, and he hits on all styles of banjo, including the banjo-ukulele and the banjo-mandolin..

Through the years, Carlin himself has taken his clawhammer-style of playing around the world. He has toured the United States, Japan, Australia, Canada, the United Kingdom and Western Europe.

His Grammy-nominated work has included collaborations with Hartford and Joe Thompson, along with Malian musician Cheick Hamala Diabate.

Carlin says it’s “marvelous’ that Rowan Public Library is committed to its free concert series “I’m honored to be a part of it,’ he adds.

A visiting artist program through the N.C. Arts Council originally brought him to Davidson County Community College in the mid 1970s as its two-year artist-in residence. Carlin also had a keen interest in North Carolina’s music heritage and did a lot of research on Piedmont string music.

“I’m very chauvinistic about North Carolina,” Carlin says. “I believe a lot of the development of the playing styles happened here. You can see that in the book.”

Well-known banjoist Tony Trischka wrote the foreword to the book.

Carlin has written more than 100 articles for music magazines such as The Fretboard Journal and Bluegrass Unlimited, and he also has album liner notes, museum catalogs and instruction manuals to his credit.

Carlin writes a regular column in the Banjo Newsletter and has produced many CDs for various artists. He toured with Hartford for six years, and since Hartford’s death in 2001, he has done more solo performances, lectures and workshops.