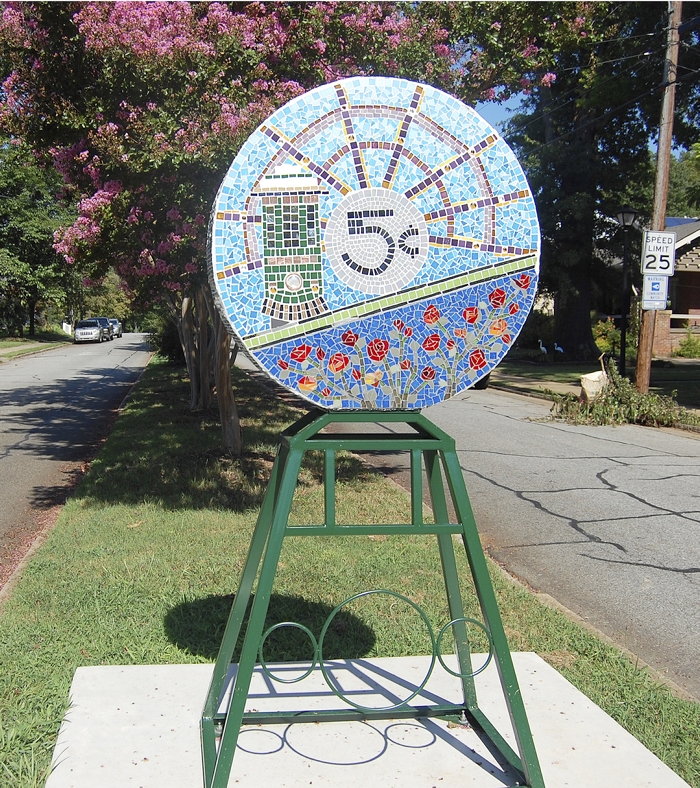 Those elements and more are displayed on a new sculpture at the intersection of Fulton Street and Mitchell Avenue to welcome residents and visitors to the Fulton Heights Neighborhood Historic District.

The mosaic sculpture, named Trolley Fare, is shaped like a coin with mirror tiles around the edge “to reflect the history” of the community, according to Dottie Hoy, president of the Fulton Heights Neighborhood Association. All of the colored tiles on the sculpture were hand-cut.

The coin includes images that represent the neighborhood’s rich history, including a trolley to remind people of the one that used to run down the middle of Mitchell Avenue and a Ferris wheel to represent the amusement park that used to be at the end of the track.

The three circles and shape of the sculpture’s base imitate the front of a trolley car.

Brossart and the board members worked together to come up with the final design.

The sculpture was unveiled at a community picnic last weekend, and Land said people seemed to like the piece.

“Everybody loves it,” she said.

It took two years for the sculpture to be installed. Fulton Heights neighbors and a grant from the Rowan Arts Council paid for the piece, and staff from the city poured the cement block that the sculpture stands on.

“It’s amazing what a community can do when we all work together,” Land said.

This is the third sculpture for the neighborhood. The other two are at Centennial Park, a city-owned park in the neighborhood that Geoffrey Hoy, neighborhood association board member, said the Fulton Heights residents helped create and pay for. Matt Amante, who the board also found through the sculpture show, created both sculptures.

Dottie Hoy said the new piece seemed like it needed to be at the entrance of the neighborhood.

“We thought (the new sculpture) did not belong at the park,” Hoy said. “It’s more of a welcoming piece.”

Geoffrey Hoy said the sculpture helped support the artist and beautified the community, and Jayne Land said it added more character to “a characteristic neighborhood.”

“We’re more than a little proud of it,” Dottie Hoy said.