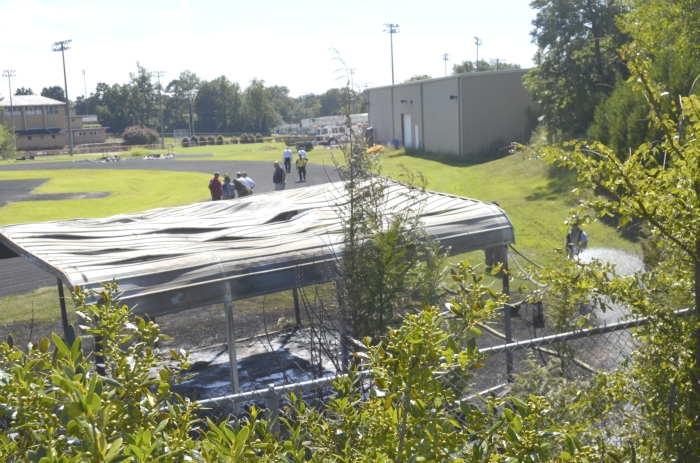 Salisbury Fire crews douse this utility shed at Salisbury High School's practice field in the 700 block of West Thomas Street on Monday after someone reported a fire on the field. The fire did not spread to a nearby house, but was contained just along the tree line. No injuries were reported. Fire officials say the cause of the fire is not immediately known. Shavonne Walker/Salisbury Post

SALISBURY — Salisbury Fire Department officials say they aren’t yet sure what caused a fire that destroyed a utility shed and a grassy area at the back of the Salisbury High School track and football practice field.

The fire occurred in the 700 block of West Thomas Street, across from Church of Christ, just after 2:30 p.m. Monday with a first alarm because of heavy smoke, said Salisbury Battalion Chief Jay Baker. He said four crews responded to the fire, as did Salisbury Police.

No injuries were reported. It didn’t appear that any students were on or near the field, but it’s not clear, officials said.

Investigators will rule out any accident or arson. It’s too early to determine the cause, Baker said.

The school normally stored workout mats underneath the awning at the shed, but it’s not clear if any other items were stored there. The fire spread from underneath the shed and was contained to the grass line.

Albert Shaver said he saw the smoke from his Church Street home and drove over to check on a friend whose West Thomas Street house is located right beside the practice field. The only thing that separates the home from the field is a group of trees.