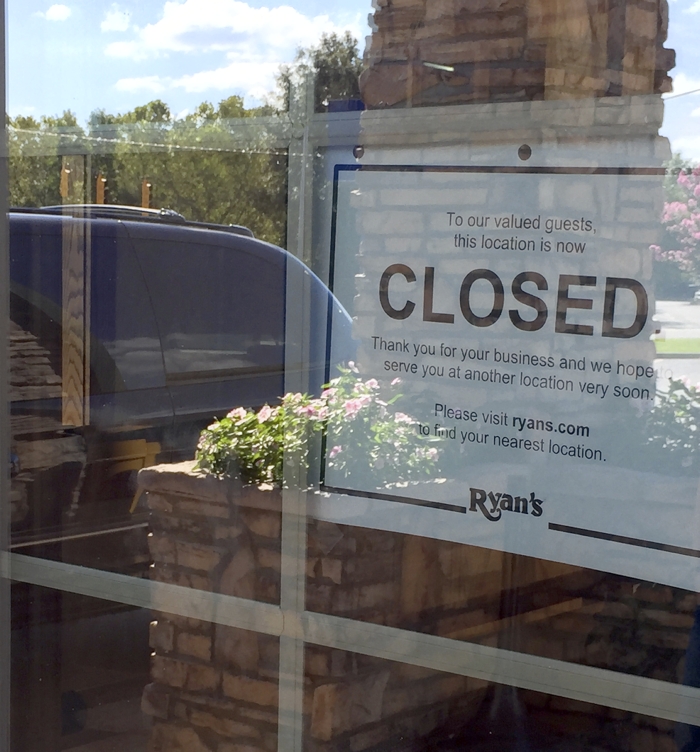 The restaurant closed suddenly on Sunday night without notifying employees or customers ahead of time, according to employees at the site Monday.

The public relations agency for Ovation Brands, parent company of Ryan’s Buffet, said the restaurant closed “as a result of business decisions,” and could not release any more information on the matter.

A group of employees gathered in the restaurant’s parking lot on Monday afternoon, informing longtime customers who drove up that the restaurant was closed.

Lisa Brownhale, a server and opener for the restaurant, said the employees who worked on Sunday were leaving for the night as the general manager put a sign up in the window that said, “To our valued guests, this location is now closed. Thank you for your business and we hope to serve you at another location very soon. Please visit ryans.com to find your nearest location.”

Brownhale said the restaurant had been having problems for months. One thing that drove customers away was the broken air conditioning. Temporary units were put in, but Brownhale said they did not work well.

Melissa Moore, a cashier, said she was most upset about how sudden the closing was. She said there was no warning from management that the restaurant would be closing.

Jennifer Sutphin, who stopped working for Ryan’s Buffet before this closing, said she had plenty of good memories from working there.

“This is my second home,” she said.

She said there was a time where employees were allowed to bring their children to the restaurant if they could not find babysitters. The children would sit in a back room and do their homework or color.

Sutphin said her time there was “beautiful,” but the way the restaurant was closed was wrong.

Salisbury’s Ryan’s is not the only one to close abruptly. According to the Consumerist, Ovation Brands, which is also the parent company for Hometown Buffet, Fire Mountain and Old Country Buffet, announced that it was closing 74 underperforming restaurants across the country in February.

On March 6, the company closed the rest of its restaurants and filed for bankruptcy the next day. It was unclear at the time whether those additional restaurants would be closed permanently.

Ryan Brands merged with Buffets Inc. 10 years ago to form Ovation Brands. According to the Consumerist, the company has filed for bankruptcy three times in the last eight years.

Brownhale said she had personal relationships with not just her fellow servers, but her customers as well. Ultimately, she said she felt that the situation was not handled properly.