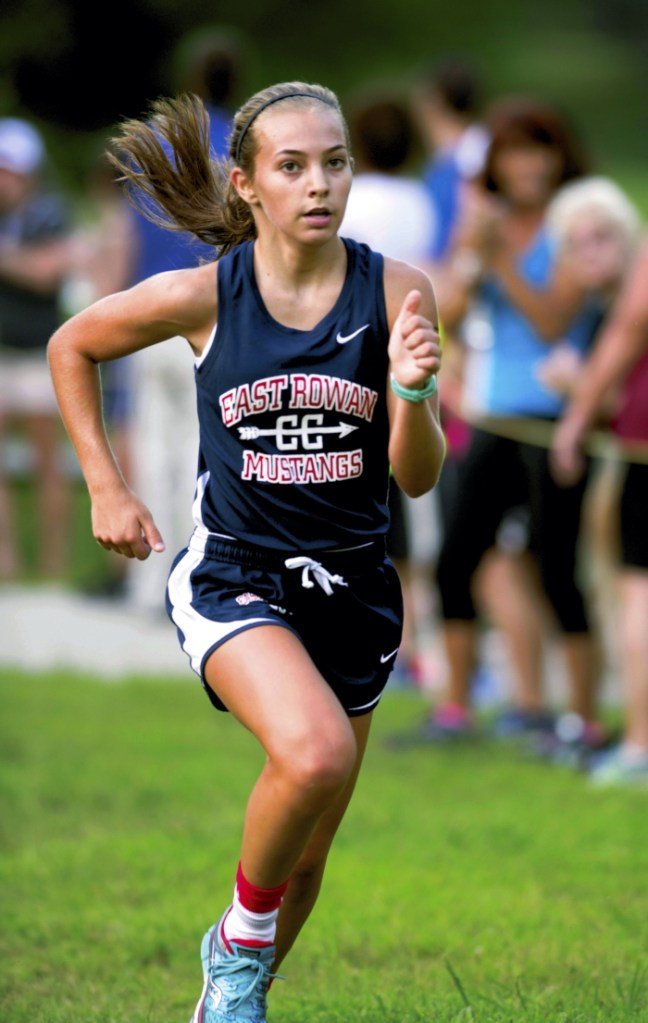 SALISBURY — East Rowan freshman Adalie Harrison introduced herself to the cross country world on Tuesday evening, winning the Preseason Rowan County meet by 91 seconds.
Harrison ran 20:20.73 at Dan Nicholas Park, a time quicker than the 20:34.7 clocking turned in by Josie Heglar, a West Rowan graduate and Western Carolina signee who won the official county meet last November.
“I was very nervous because I really don’t like afternoon races,” said Harrison, a tiny, dark-haired bundle of energy. “I like to run in the morning. When you run in the afternoon, you’re worried about being hydrated properly. You’re not sure if you drank enough water.”
Harrison’s preparations were good enough. She led from start to finish.
“I don’t like to get behind people,” Harrison said. “You can get boxed in and it can be hard to get around people. So I try to get out quick.”
East Rowan senior Faith Faller won the 2015 Pre-Rowan County meet and was runner-up to Heglar last fall in the official county meet. She is one of the county’s best returners, but she’s been in a walking boot since July because of a stress fracture. There’s no timetable for her return.
Subtracting Faller might’ve made East coach Jon Heidrick grumpy, but adding Harrison has put a smile on his face.
“Sometimes you just get lucky, and a really special athlete falls in your lap,” Heidrick said. “Adalie has run a 5:35 mile and we saw the speed and the potential when she was at Erwin (Middle School). She’s run very good times in a number of road races, so what she did today wasn’t a surprise. We’ve just got to maintain her training.”
In 1992, Rebekah Frick ran a county-record 19:18.8 to win the individual 3A state championship at Charlotte’s McAlpine Greenway and lead East Rowan to a fourth-place team finish. McAlpine is a faster course than Dan Nicholas, and Heidrick won’t be shocked if Harrison challenges Frick’s mark on Saturday in the Providence Invitational in her second high school meet. That’s how exciting a prospect Harrison is.
As far as the team competition, Carson prevailed with a nice mix of newcomers and returners. Carson’s score of 34 came from a top five that finished 2-3-7-8-14. Salisbury (53), East (71), West (92) and South (103) rounded out the team scores.
Taylor Wiggins, who finished her sophomore season with a bang and was a state qualifier, placed second to lead the Cougars. Wiggins ran 21:51.
“It was my first 5K since November, so I was pleased with the time,” Wiggins said. “And I was happy with how the team ran. We’ve got some good new girls.”
Carson freshman Taylor Conrad placed third. Juniors Hannah Venable and Jessie Nichols placed seventh and eighth. Freshman Grace Curlee was 14th.
“There were five freshmen in the top 13 runners today,” Carson coach Les-Lee Peeler said. “You’re seeing more young runners in the county now because of programs like the Hurley Y Warriors. You’re seeing more families running.”
Leading Salisbury to second place was one of those Hurley Y Warriors, Leah Cressler, a freshman. Other Hornets in the top dozen runners were Ellen Simons (sixth), Mary Kaufmann (10th) and Julia Honeycutt (11th).
Graysen Evans, a senior, finished fifth to lead West.
East junior Shalea Vanhoose was ninth.
Freshman Madison Lowery, a sophomore, and Madison McGuire, a freshman, placed 12th and 13th, respectively, to lead South.
While North didn’t have enough runners to post a team score, freshman Ashley Lore led the Cavaliers with a 19th-place finish.
“This is just the early part of the season and where teams are now doesn’t necessarily mean that’s where they’ll end up,” Heidrick said. “If Faith gets healthy and our freshmen keep coming on, we can do some catching up.”