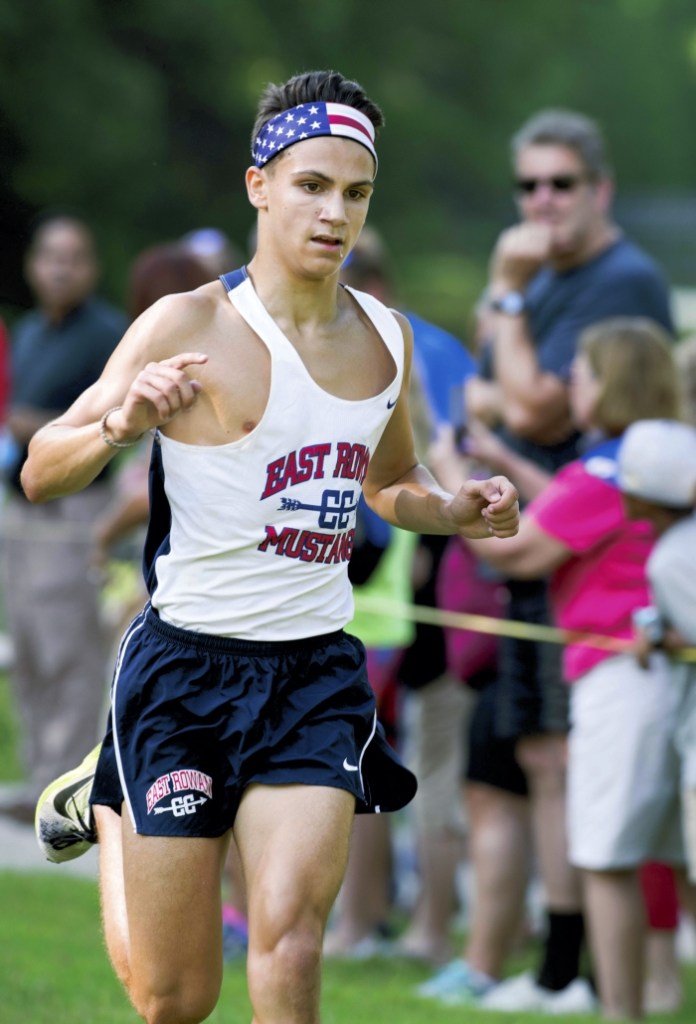 SALISBURY — Carson phenom Zachary Marchinko has moved on to college and is competing for a spot with a strong Charlotte 49ers program.
Marchinko’s departure theoretically transformed boys cross country in Rowan County into a wide-open sport, but East Rowan junior Sean Incardona will have something to say about that. It will be OK with Incardona if one guy continues to dominate.
Incardona, arms raised to the heavens and punching the air like a triumphant boxer, got his season started with a knockout on Tuesday at Dan Nicholas Park. He won the Preseason Rowan County meet in 17:43, crossing the finish line 13 seconds in front of West Rowan senior Cade Harrill.
Incardona, the third-place finisher in the official county meet last November behind Marchinko and Garrett Ingold, another Carson star who graduated, was a slight favorite heading into Tuesday’s race. He lived up to those optimistic predictions.
“I’ve prepared for this year hard, trying to find every little advantage I can,” Incardona said. “I’ve been more responsible, really paying attention to my hydration and everything that I eat.”
While Incardona took the individual title, Harrill (17:56) and Andrew Burgess (17:58), a junior who placed third, sparked an overwhelming team effort by West. The Falcons seem certain to end Carson’s two-season ownership of Rowan boys cross country. Coach Scott Foster’s Falcons took the next five spots behind Incardona for a team score of 20.
Rounding out the team scores were East (58), Carson (78), Salisbury (100) and South (124).
Harrill was a story. He was not the guy Incardona expected to push him most of the race.
“I started fast, but Cade passed me and I had to pass him back, out near the dam,” Incardona said. “I’ve got more speed than him, but he’s really good runner.”
Nor was Harrill the guy that most of the fans were looking for to challenge for county bragging rights. Harrill was only 21st in the official county meet in 2015 — but there was a reason for that.
“He turned his ankle three different times last year and the last one was bad,” Foster said. “But this is a kid who ran 17:44 when he was a sophomore. I think everyone had sort of forgotten about him, and that’s what I’ve been using to motivate him. I keep telling him that everyone has forgotten about Cade.”
Harrill had something to prove — and he did.
“I got hurt last year and got down on myself,” Harrill said. “I’ve come back this season with a different attitude, and it’s exciting to be healthy and focused. We’ve got a good team. We’ve been putting in a lot of miles to be able to do what we did today.”
Burgess is also going to make things interesting for Incardona as this season unfolds. He won a national championship in the steeplechase in the Junior Olympics in Houston, and the track and field standout placed third on Tuesday even though he’s had only a couple of cross country practices under his belt.
The fourth-place finisher for West also was a surprise — senior Nathan Zauner.
“He ran 11 miles on Monday, and you don’t want to that before a meet,” Foster said with a chuckle. “But Zauner is our secret weapon right now. He’s a guy who didn’t run on the varsity last year.”
Placing fifth and sixth for the Falcons were familiar names — senior Cameron Butler and junior Luke Hager.
East’s Jonathan Brindle was the second-fastest Mustang and took seventh. Placing eighth was another West veteran, junior Oscar Bautista.
Leading Carson were junior Jacob Higgins (ninth), senior Alex Wilson (11th) and junior Jonah Evans (12th).
Junior Keegan Dillon placed 10th to pace Salisbury.
Mitchell Juchno (14th) was the top runner for a South Rowan team that is now piloted by former Carson head coach Robert Marchinko.
While North didn’t have enough runners to post a team score, senior Michael Brandt finished 18th to lead the Cavaliers. He was the final runner in the field of 64 to break 20 minutes.