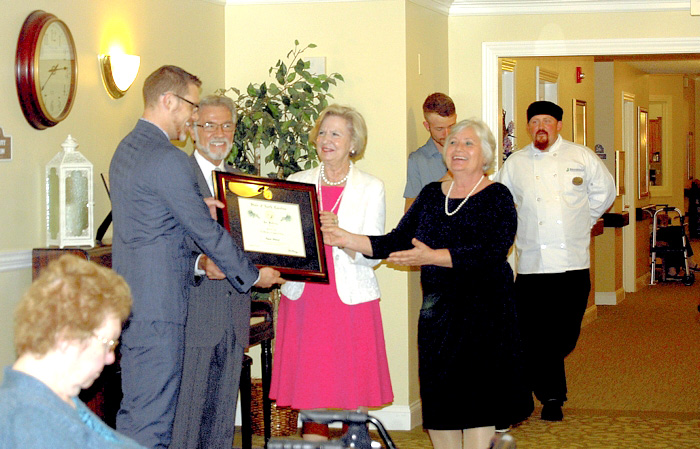 SALISBURY — Residents and their families gathered at Brookdale Salisbury Monday to surprise Ryan Bidart, executive director, with an award from the N.C. Assisted Living Association.

Frances Messer, president and CEO of the association, travelled to Brookdale Salisbury, an assisted living community, to present Bidart with the association’s Community Leadership Award.

Bidart and three others will be recognized at the association’s conference. Every year, three individuals win Hero Awards and one wins the Community Leadership Award.

One criterion for the Community Leadership Award is showing outstanding leadership not just in the senior living community, but in the larger community as well.

Messer said the selection committee selects the winner blindly, meaning they don’t know the names of the applicants or where they are from. She said the selections are based on recommendation letters from residents and their families, as well as staff.

Heather Suggs, a registered nurse and health and wellness director at Brookdale, recommended Bidart for the award.

She said of all the bosses she has worked for at long-term living communities, Bidart has been the best boss she has ever had.

“He is unlike any boss I’ve ever seen,” she said.

“If anybody deserves to win it, he does,” Suggs said.

Bidart was out with the flu for a couple of days, so that made it easier to keep the win a secret, Suggs said. When he came back to work, Suggs told him to stay in his office so that he would not get any of the residents sick, which kept anyone from spoiling the surprise.

Bidart will be awarded with the Community Leadership Award at the N.C. Assisted Living Association’s conference in October where his peers will honor him, but Messer said the celebration on Monday was a chance for the people who nominated him to congratulate him. Bidart will also receive a $1,000 check at the conference.

This year, Messer was able to get a certificate of appreciation from Governor Pat McCrory’s office that honored Bidart for winning the association’s award. She, Mayor Karen Alexander and State Rep. Harry Warren presented Bidart with the governor’s certificate on Monday.

Messer will recommend Bidart for an award from Argentum, a national senior living organization, with a video presentation featuring interviews from staff, residents and families.

Bidart said he was honored to win the award.

“I was completely surprised,” he said.

Bidart said all of his employees come in every day and work hard to serve their residents.

“Receiving an award like this is validation,” he said.