Changing of the guard: New teacher, principal of the year announced 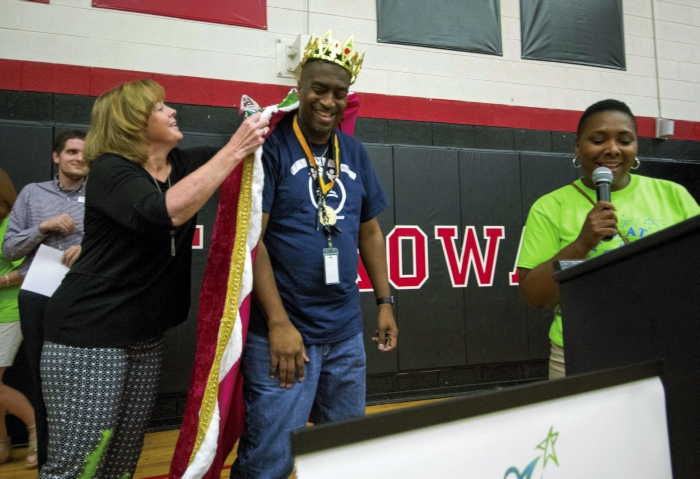 Last year’s Teacher of the Year Nancy Goodnight, left, adorns Anthony Johnson with a robe and crown after he was announced as the new teacher of the year for the Rowan-Salisbury School Sytem during a back-to-school conference Tuesday. Jon C. Lakey/Salisbury Post

LANDIS — An early morning changing of the guard saw the installation of a new teacher and principal of the year.

During the conference’s opening rally, Superintendent Dr. Lynn Moody spoke briefly to the system’s nearly 1,500 teachers about finding the “sweet spot” of teaching — figuring out the perfect combination of factors that makes a learning experience extraordinary for students and teachers alike.

The teacher and principal of the year awards were presented by representatives from community partners Belk and Gerry Wood Honda.

Durant has been the principal at West Rowan for nine years and said he is “very honored” to be able to represent his school.

“I’m just an extension of the school and community I serve,” he said.

Durant said that when Moody arrived two years ago, it felt like she “issued a challenge” to administrators to make their schools, and the district, a better place. He felt that gave him an opportunity to “be transformational” and lead in a different way.

Anthony Johnson, a fourth- and fifth-grade science and social studies teacher at Isenberg, said he was “speechless” over the award.

“It just caught me by surprise,” he said.

Johnson’s students work with robotics, and this year he said he put a maker space in his classroom, and his students have worked on projects publishing their own books or making music videos.

Johnson is married to Dr. Desiree Johnson, and has three daughters, Adanya, Kailah and Jessieca.

Johnson received a $1,000 stipend for his classroom from the Rowan County Chamber of Commerce and a free one-year lease on a vehicle from Gerry Wood Honda.

All certified staff attended the back-to-school conference. After the awarding of teacher and principal of the year, teachers broke off to attend learning sessions. Nearly 400 topics were available to teachers throughout the day.

District teachers of the year were: