‘I love every inch of this state’: Holshouser receives state’s highest civilian honor 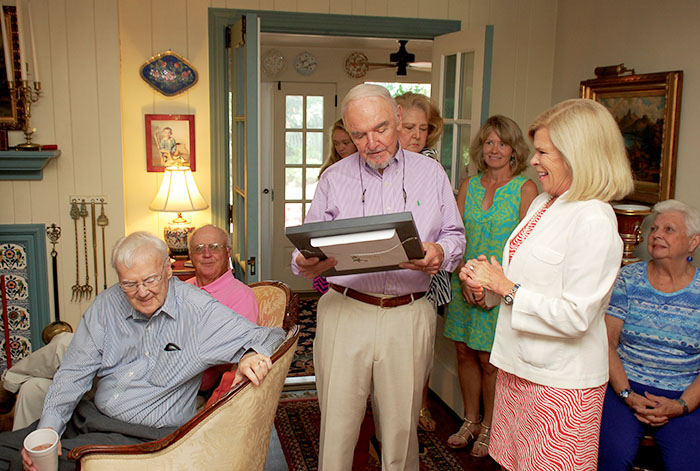 SALISBURY — John L. Holshouser said his wife, Nancy, presented this little celebration of his 78th birthday “as an ice cream social with family and a few friends.”

But when Holshouser noticed Resident Superior Court Judge Anna Mills Wagoner and a reporter were in the living room, “I had the feeling something else was going on,” he said.

That something else was Wagoner’s presenting to Holshouser The Order of the Long Leaf Pine.

In remarks prior to her handing over the state’s highest civilian award, Wagoner said Holshouser in his roles as an FBI special agent, practicing attorney, District Court judge, county attorney and Superior Court judge had served the country, state and county with integrity, professionalism, compassion and intelligence.

Wagoner praised Holshouser’s wit and described him as unflappable.

“He’s truly a lawyer and a gentleman who would make Atticus Finch proud,” she said.

Signed by Gov. Pat McCrory, The Order of the Long Leaf Pine is awarded to people for their exemplary service to North Carolina and their communities that is judged to be above and beyond the norm.

The award was created in 1963. Along with the honor, a person who receives The Order of the Long Leaf Pine also is bestowed the rank of “Ambassador Extraordinary” and is privileged to propose the North Carolina Toast “in select company anywhere in the free world.”

After she presented Holshouser with the framed order, Wagoner and Holshouser began to read the toast together.

“Here’s to the land of the long leaf pine …” they started.

It was about here that Holshouser stopped and complained, “I don’t have my glasses.”

Holshouser told the friends and family at his ice cream social he never dreamed he would reach a level of recognition where someone would even recommend him for such an honor.

“If you think I’m surprised, I feel everyone in here is more surprised,” Holshouser said.

For a “country lawyer” from a small town to receive The Order — it just doesn’t happen,” Holshouser said, and he accepted the honor with “profound gratitude.”

“I guess I’m ready to jump into the tomb now,” Holshouser said. “… Thanks for sharing it with me.”

Holshouser said he loved North Carolina, from dipping his toe into the ocean at the Outer Banks, to climbs through the Blue Ridge Mountains.

“I love every inch of this state and this community,” he added. “I love Salisbury.”

Also a member of the N.C. Bar Association’s Hall of Fame, Holshouser said of The Order of the Long Leaf Pine, “I think this is the greatest honor I’ve ever received.”

Holshouser still practices law in Salisbury. From 2005 to 2011, when he reached the mandatory retirement age of 72, Holshouser was Resident Superior Court judge. He might be the only person in Rowan County to have received a special commendation from the late FBI Director J. Edgar Hoover.

In the 1960s, as a special agent for the FBI, Holshouser assisted in the capture of  Charles “Blackie” Harris, who was on the FBI’s Ten Most Wanted fugitives list.

After admiring his Order of the Long Leaf Pine, Holshouser quickly changed gears and invited everyone to share in the homemade ice cream. Out in the sunroom, he started dipping the cups of peach himself.