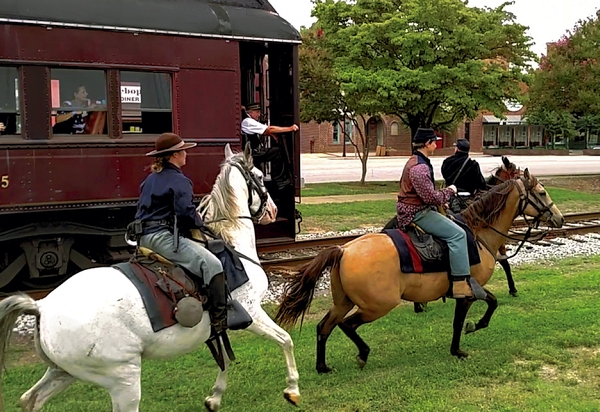 The event will truly be a trip back in time, with Civil War reenactors providing living history demonstrations, musket fire, and troop movements. Sutlers, named for the merchants that followed troops to sell their wares, will be set up with Civil-War merchandise.

Civil War Weekend will also feature a special guest.  The Texas locomotive has been visiting the museum, undergoing cosmetic restoration in the Back Shop. This famed engine was a participant in the Great Locomotive Chase of the Civil War, helped to rebuild the city of Atlanta during Reconstruction, and is the pride of the Atlanta History Center. Experts will detail the Texas’s place in history and the restoration progress.

Civil War historian Michael C. Hardy has written numerous books with a particular focus on North Carolina’s role in the War Between the States.  Chris J. Hartley wrote the definitive history of Stoneman’s raid of Salisbury.  Both will be featured with two presentations Saturday, Aug. 26 and one presentation Sunday, Aug 27.

Visitors will also witness a reenactment of Stoneman’s troops raiding a train with Confederate military supplies and the sword, uniform, papers, and family of slain Confederate Lt. Gen. Leonidas Polk as it attempted an escape from Salisbury. Musket and cannon fire will be heard and seen at several different locations throughout the day.

Admission to Civil War Weekend: Stoneman’s Raid Through Salisbury is $14 for children ages 3-12 and $18 for adults.

Those wishing to experience the full train ride reenactment, riding onboard as cavalry troops gallop alongside and gunfire is exchanged can purchase Admission Plus Train Ride tickets.  The cost is $20 for children 3-12 and $25 for adults. Member discounts are available. State sales tax applies to all purchases.

Guests may start the event early, Friday night, Aug. 26, with Stoneman’s Raid Lantern Tours.  Tours feature a retelling of what it was like for local citizens and troops during the raid. Tours will last one hour and are $18 per person. Guests may arrive an hour before the scheduled start time to enjoy refreshments, live music from the Huckleberry Brothers, and living history demonstrations in the Bob Julian Roundhouse.

Saturday night, the Huckleberry Brothers will be the main attraction during the Dinner and Dance of the Civil War.  Held in the Bob Julian Roundhouse following daytime activities, the Huckleberry Brothers will perform songs, ballads, and fiddle tunes from the era while guests dine on chicken fricassee with noodles, green beans, corn, and a biscuit.  Apple and blueberry cobbler will be served for dessert.  Tickets are $30 for individual adults, $50 per couple, and $20 for children ages 3-12.

Two off-site trolley tours will also be offered during Saturday and Sunday’s events.

The Salisbury Historic National Cemetery and Salisbury Confederate Prison site will be viewed during a one-hour trolley tour.  The site holds 18 trench graves bearing the mortal remains of some 11,700 Union soldiers, once prisoners in Salisbury.  The liberation of the prison was a primary reason for Stoneman’s raid of Salisbury, though virtually all prisoners had been moved to other locations by the time he arrived.  Tours are $12/person and will be offered numerous times Saturday and Sunday.

Another trolley tour will take visitors to the Fort York site, the scene of a battle between Confederate and Union troops for the North Carolina Railroad Bridge. Guests should be advised that tours require walking approximately 500 yards uphill. Visitors may also choose to stay in the trolley.  Tickets are $15/person, with $3 of each ticket going toward the Landtrust for Central NC to aid conservation of this historic site.

Tickets and all upgrades are available now at www.nctrans.org. All events are rain or shine, all purchases are final, and state sales tax applies to all purchases. Handling fees may also apply.

About the N.C. Transportation Museum

The N.C. Transportation Museum, located in historic Spencer Shops, the former Southern Railway repair facility is located just five minutes off I-85 at Exit 79 in Spencer, N.C., and about an hour from Charlotte, Greensboro or Winston-Salem. The museum is part of the Division of Historic Sites and the N.C. Department of Natural and Cultural Resources.