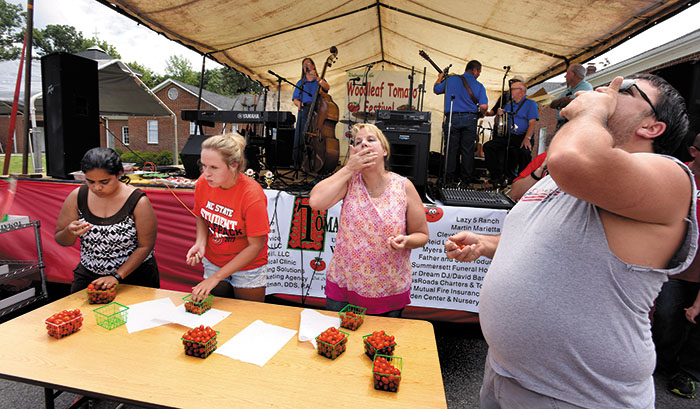 The adults in the tomato eating contest were Garima Rider, Neely Holloway, Deborah Coleman, and Corey McAdams. photo by Wayne Hinshaw, for the Salisbury Post

Holloway defeated three-time defending champion Deborah Coleman in taking the adult title. When the dust had settled and paper towels had wiped away off the extra tomato juice. Holloway beat Coleman by a measly four cherry tomatoes.

Except for those last tomatoes, the women had each eaten two full cartons of cherry tomatoes (grown in Woodleaf) in five minutes.

Holloway’s strategy: “As many as you can put in your mouth at one time,” the little chipmunk said. “You can’t go one at a time.”

Holloway was home from school this weekend because her new puppy needed shots, plus she wanted to support her church’s big festival. Her name, Neely, comes from Neely Moore, one of the first big tomato farmers in Woodleaf.

The winner of the kids’ division — for the third year in a row — was 10-year-old Talton Correll, whose strategy was to have breakfast, then avoid eating until the 1:30 p.m. contest started. (He may have had a bit of ice cream in there somewhere.)

Once again, Talton proved he could down a whole carton of cherry tomatoes in three minutes.

The all-day festival was full of winners and fun. David Dowell was elected the new mayor of Woodleaf in a gentlemanly competition over recent weeks against little Jack Hagen, known for his signature yellow rain boots.

The unofficial mayoral title went to the person who raised the most money for the church. Dowell moved back to Woodleaf a couple of years ago after a long time up north.

“It’s good to be back home with friends and family,” Dowell said. Does being mayor of Woodleaf shape up as a tough job in the year ahead?

“I grew up picking tomatoes, it shouldn’t be too hard,” Dowell said.

The day was not lost, however, for little Jack Hagen,  who ran away with the Little Mr. Tom contest.

Sam and Gloria Gorrell were chosen as king and queen of the 10th annual Tomato Festival. Sam Correll recalled that he and his brother started growing tomatoes on their dad’s farm in 1958, when he was 15 and the brothers wanted a little extra spending money.

“We’ve been having a tomato patch ever since,” Correll said, understating his family’s involvement with tomatoes.

The tomato festival started 10 years ago as a way for Unity Presbyterian Church to raise money toward paying off its new fellowship hall. (That has been accomplished.)

Patti Safrit, one of the chief organizers since the beginning, said Libby Watson is really the battery that keeps things going.

Safrit said not to believe any rumors going around that this is the last festival. The money being raised is still going to too many worthwhile missions and charities, she said.

“Nobody really wants to stop it,” she added. “There are other things to be done.”

The festival recognized Jay Owens of College Barbecue, who has served up food at the festival for seven years. In his honor, the festival will give $500 to a charity of his choice, which is Prevent Child Abuse Rowan.

“You can’t beat that, can you?” Spanky said.

Tomato sandwiches were selling at the church tent for $1 each.

“I live in Woodleaf, so it’s kind of a must,” Kelly Burnoski said as she put the finishing touches on her sandwich with salt and pepper.

Opinions vary on what makes the ultimate tomato sandwich. David Connor said a good tomato sandwich has to include salt and pepper, white bread, Duke’s mayonnaise — and Woodleaf tomatoes, of course.

“They’re better when you call them ‘maters,'” Lynn Shumaker said.

Shumaker said a real good tomato sandwich has all those other elements, plus a healthy slice of Vidalia onion.

For 25 cents each, the church tent was selling chocolate “tomufells.”

“You can spell it about any way you want,” Safrit said. A “tomufell” is essentially a bite-sized tomato covered in chocolate.

Safrit said the festival’s planning committee talked about doing something special for the 10th anniversary. Some of the ideas were a  huge tomato-themed birthday cake or the building of a world-record-sized tomato sandwich.

But with the heat of August, the final decision was made to have a cupcake challenge, and all the tomato-themed cupcakes created for the competition were later given out to the crowd on a first-come, first-served basis.

Charlotte residents Nelson Everhardt and his wife, Nikki, came to the tomato festival for the first time Saturday. Nelson’s sister, Reita Smyre, and her husband, Paul, also traveled down from Maiden.

Paul often travels to Rowan County during the week so he can buy Woodleaf tomatoes.

Woodleaf is familiar territory for Nelson and Reita, who were grandchildren of Willie Rice, who had a 141-acre farm near Cool Springs and Depot roads. They traveled to their grandfather’s farm regularly during the summers and about once a month otherwise.

Besides its dairy operation, the farm grew cotton and tomatoes, and the kids picked their share of both as they grew up. Generations of their family were part of Unity Presbyterian Church, and many ancestors are buried in the church cemetery.

Willie’s old farmhouse, which dates back to 1805, and the 1832 barn are still on the land, which passed down to Nelson, Reita and two other grandchildren.

Nikki said her husband still speaks fondly of rushing in the door at his grandparents’ house and going to the drawer in the stove that held freshly made biscuits.

• Most unique — Destiny Vietch with her pepper chocolate with tomato jelly-topping cupcakes.