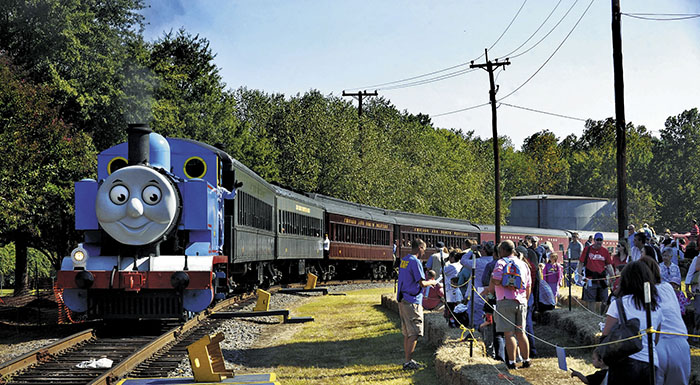 Large tourist events like Thomas the Tank Engine at the NC Transportation Museum were cut out in 2020, leading to a 28.8% drop in visitor spending in Rowan County. Wayne Hinshaw/Salisbury Post file photo

Statistics released last week by Visit North Carolina show that visitors to Rowan spent $160.47 million in the county during 2015. That’s a 4.31 percent increase from the prior year and the seventh-straight year of increased tourism numbers. It’s also the 11th-fastest growth rate in the state.

In Rowan County, the tourism industry represents 1,360 jobs and nearly $27 million in payroll, according to Visit North Carolina. As a result of tourism- and visitor-related spending, local governments receive approximately $5.15 million in tax revenue. State government received $8.55 million as a result of visitor spending

In a news release about the numbers, County Commissioner Craig Pierce, who sits on the local tourism board, said the county is dedicated to including tourism in its goal to improve the local economy.

When asked about the increases in visitor spending, Commissioners Chairman Greg Edds said said it was “good news that we can use to pay for the things that we value.” Increased visitor spending helps Rowan County reduce the property tax rate or avoid future increases, he said.

“If you’ve got dirty streets, people don’t think much of you,” Edds said about the tourism numbers. “The revenues that come off of that help us keep our streets clean, keep the weeds of our curbs and islands and provide revenues to help us run our county departments.”

The county’s job, Edds said, is to create a pro business atmosphere and remove hurdles for businesses to grow.

Some of the popular tourism attractions in Rowan County include the N.C. Transportation Museum, Dan Nicholas Park, Lazy 5 Ranch, Patterson Farm and Morgan Ridge Vineyard. However, spending at those individual locations aren’t the only component of Visit North Carolina’s estimates. The numbers released last week use a formula that consists of 18 different travel categories. Categories include lodging, transportation, meals, entertainment and retail shopping.

Tourism numbers may even include visits to local farms. Michelle Patterson, owner of Patterson Farm in Rowan County, said local agritourism has seen a continued demand for authentic experiences.

Meacham said the ability to escape from nearby large cities is one thing that’s attractive about Rowan County.

It’s estimated that the total payroll of of tourism-related businesses is $26.83 million. That’s a more than $2 million increase over the prior hear.

The Salisbury-Rowan Convention and Visitors Bureau expects another increase in visitor spending in 2016. Meacham says financial figures appear to show Rowan continuing its growth streak. Through June 0f 2016, local hotels have seen a 2.3 percent increase compared to the same period in 2015, according to a news release. A new Holiday Inn Express is scheduled to open by the end of 2016, which Meacham says could help in the future.

Rowan’s only immediate neighbors that saw more visitor spending in 2015 were Cabarrus and Iredell counties.

Mecklenburg County was first in the state for total visitor spending. The remainder of the top five included Wake County in second, Guilford in third, Dare in fourth and Buncombe in fifth.

Across North Carolina, visitor spending increased in 91 of the 100 counties. The average increase was 3 percent, meaning Rowan grew faster than the state average.

“Tourism is a major force in North Carolina’s economic development,” Governor Pat McCrory said in a news release. “The industry is fueling a continued growth in jobs and contributing substantial sums to the state budget and local economies in every corner of our great state.”

The visitor spending figures released last week by Visit North Carolina were part of a study conducted by the U.S. Travel Association. It uses sales and tax revenue data, employment figures and other industry and economic data.