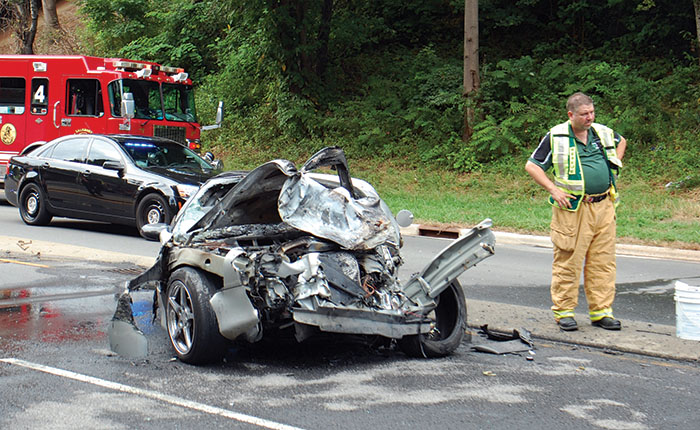 Mark Wineka/Salisbury Post The driver of this silver Camaro was killed in a three-vehicle accident that injured two others on Jake Alexander Boulevard Saturday about 5:20 p.m. The Camaro caught on fire after the collision.

SALISBURY — The driver of a silver Camaro was killed early Saturday evening in a fiery accident involving at least three vehicles on Jake Alexander Boulevard.

The identity of the Camaro’s driver, who died at the scene, has not yet been released. Two other people were transported to the hospital with injuries.

The accident occurred about 5:20 p.m. in the eastbound lanes of Jake Alexander Boulevard between South Main Street and Julian Road. Vehicles involved in the wreck came to rest just beyond the railroad overpass.

Traffic on Jake Alexander Boulevard had to be detoured for a long period onto Julian Road/Martin Luther King Jr. Avenue and South Main Street.

The Camaro caught on fire after its collision with a white Chevy Silverado truck, which was heavily damaged, especially on its left side.

The Camaro came to rest in the inside eastbound lane, while the truck was off the road on the right about 50 yards ahead. A third vehicle, a gold Pontiac Aztek, showed minor damage and was sideways in the road.

The Camaro’s front end was completely smashed in and mostly unrecognizable. Lots of debris from the vehicles, including a couple of tires, filled the highway between where the Camaro and truck came to rest.