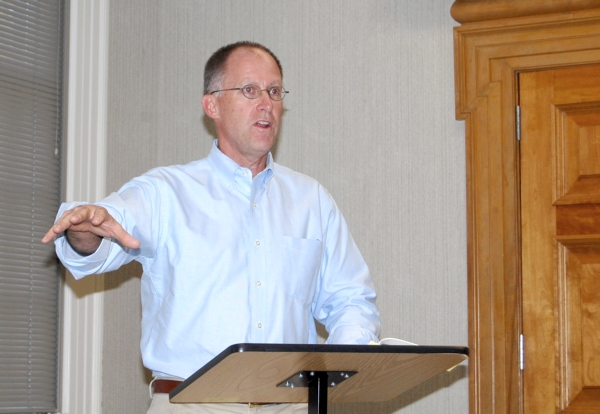 What made “The Wright Brothers” by David McCullough such a compelling book?

Steve Cobb, leading the final event of 2016’s Summer Reading Challenge, said it was because they became real people through the research and writing of the book.

We not only learned how to tell the brothers apart, we learned about their faithful and hard-working sister, their supportive father, ace mechanic Charlie Taylor and a host of other real people who proved that man could fly.

Cobb pointed out that most books about the first flight talk about the competition with the other people trying to fly and the technical aspects of the flyer itself.

“But ‘The Wright Brothers’ is about the two of them, their personalities and relationships and how they became the ones who were successful at flight.”

Cobb emphasized a quote from early in the book. Someone asked the brothers how they succeeded: “Pick out a good father and mother and begin life in Ohio.” That raised the questions — who were their parents and why Ohio?

But first, the group at Rowan Public Library considered Wilbur, the taller, older brother. He was slender and birdlike, while Orville was the dapper dresser, shorter and younger.

Lewellen Padgett pointed out that Wilbur was extremely hard working. “He thinks of it continually.” Wilbur is also aesthetically aware. When he spent about a year in Europe trying to sell planes, he would visit museums and walk down the street admiring  architecture.

Wilbur was also very observant, watching the seabirds at Kitty Hawk and the crows in Ohio for clues about flight. His observations led him to using wing warping to get lift and change direction, while their competitor, Glenn Curtiss, had come up with the idea of ailerons.

Dottie Hoy said the Wrights reminded her of Garrison Keillor’s Norwegian bachelor farmers who could endure anything and keep going.

Cobb said the brothers worked hard and stayed out of the limelight. Wilbur had been seriously beaten and scarred by an attack from a young man who would be charged with murder later in life. At about the same time, their mother was dying of tuberculosis. Wilbur gave up on college to heal himself and take care of his mother. When she died, Wilbur was 17 and Orville was 13 — a tender age to lose a beloved mother.

Wilbur was serious, reflective and had a great memory. He had a laser-like focus and great endurance, especially considering the weather at Kitty Hawk, Cobb said.

Neither Wilbur nor Orville were religious, although their father was a bishop. He accepted that, because they had thought it out and made a decision.

Orville was the gentler brother, painfully shy and preferring to stay out of the public eye.

“He took second fiddle to Wilbur and there was no competetivenss. The brothers respected each other.”

Cobb said their sister Katharine, who accompanies them to Europe, leaves her job to take care of Orville when he is injured in a crash and takes care of all the correspondence, doesn’t get enough credit.

Nor does Charlie Taylor, who made the first engine out of bits and pieces from the bicycle shop.

Orville was the better mechanic, while Wilbur was more intellectual, but Orville was very sensitive to criticism and prone to bouts of extreme moodiness — the worst of which occurred when his sister, then 55, married. He did not speak to her again until she was on her death bed.

Theresa Pierce, a teacher at Rowan County Early College, spoke about Katharine because she acts as Katharine for special events at the N.C. Transportation Museum. “She gave up her whole life for them. I like to think she is the wind beneath their wings.”

So where did Orville and Wilbur get their mechanical genius? Their father was a preacher, a reader and writer. But their mother was smart, clever, and could fix anything or make things, especially toys, that were better than store-bought.

National Cash Register was founded in Ohio, while many other inventors were creating things in the same state.

Cobb said Ohio was a hot sport for people leaving the East Coast looking for someplace new. If people were moving to the state, they were bringing their ideas and innovations with them.

The key, Cobb said, to the success of this book is that it focuses on the people, their personalities and background, and not the thing. And the brothers remained humble, though they fought hard to retain their patents. “Their glory had not changed them at all,” Cobb said, “for which they were greatly admired. … I wish more people were like Wilbur and Orville.” They tried and failed and tried again without worrying about who was watching or what other people were thinking. The relied on their ingenuity and their bond as brothers to find success.

That wraps up the Summer Reading Challenge for 2016, but it’s coming back in June 2017, with new books, a new theme and plenty to talk about, thanks to coordinators Jennifer Hubbard and her husband, Steve Cobb.