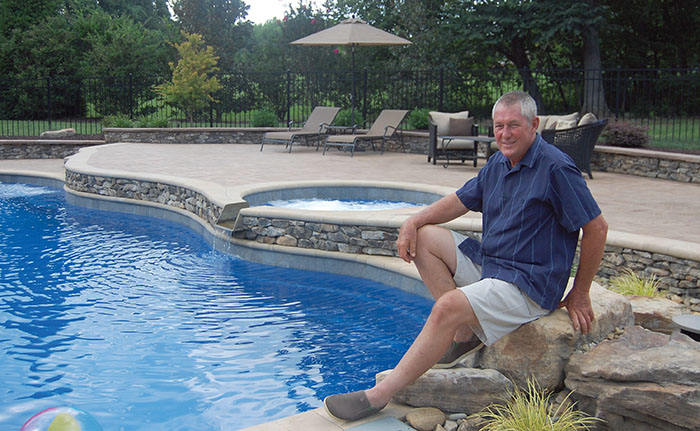 Amanda Raymond/Salisbury Post Ken Osterhus, owner of Osterhus Outdoors, works with customers to give them the exact pool that they want.

He said he knows how headstrong they both are, and whether Cyndi liked it or not, he had his mind set on starting the business.

Cyndi didn’t exactly like the idea in the beginning, but now she works with her husband handling the customer service and administrative work.

“I was not very supportive at the beginning but I’ve come around,” she said.

Ken’s willingness to work with his customers to give them exactly what they want in a pool has won him three awards in competitions against other big city pool installers.

Osterhus Outdoors is a fiberglass pool sales and installation business based out of Granite Quarry. The business has its beginnings in 2006, when Ken Osterhus was asked to help install a pool in Granite Quarry.

He was already a licensed general contractor, but found his creative side unfulfilled in that line of work.

He moved on to working with stamped and colored concrete, which is why he was called to dig a hole for a pool. A concrete worker installing the pool knew Ken had an excavator, so he gave him a call.

Ken ended up working with the homeowner to finish installing the pool. After the job, the pool manufacturer asked him for his resumé. In 2006, he became a subcontractor for them.

“They were plain pools. They were simple,” he said. “Somebody just wanted to get wet in their backyard. A lot of times they were just being put in for the children.”

Sometimes he would accompany salesmen on sales calls and watch as salesmen did not listen to their customers.

“If you’re in somebody’s house talking about something about the home, you need to listen to the wife. If I’ve learned anything in the business, I have learned that,” he said.

He started talking to his four sons, who have all ended up working with him at some point, about dealing directly with customers.

“And so that’s what I did. I started selling pools by myself,” he said.

Selling and installing pools allows Ken to express his creative side. A quick look through his gallery of work on the business’s website shows pools of all different shapes — from more rectangular-shaped pools to pools with rounded ends and wavy sides. He also installs pavers, stamps and stains the concrete in the pool and can add waterfalls, slides, tanning ledges, spill-over spas and swim jets.

The business diversified by adding Central Boiler Outdoor Wood Furnaces to bring income in during the winter, though now they sell furnaces all year.

Ken’s work has won three awards — the Leisure High Achievement Award in 2015 in the Elegance Range for a pool constructed in Charlotte, the Hardscape Hero Award from Eagle Bay Pavers and, recently, the Pool of the Month award for July from Leisure Pools for a Mediterranean pool constructed in Rockwell.

Ken said it felt good that a business from Granite Quarry won competitions against other bigger cities on the east coast.

At the Mediterranean pool in Rockwell, the retaining walls and caps were made of real rocks. Bluish-gray ceramic tile lined the inside of the pool, which complemented both the color of the water and the surrounding tan pavers.

The pool can also be controlled from the homeowner’s smart phone.

That’s the way Ken works. He doesn’t rush from job to job. He will spend months working on a project to end up with a pool and surrounding space that is exactly what his customers want. He spent seven months on the pool in Rockwell.

He never denies to a customers’ request, no matter how crazy or impossible the customer may think it is and no matter what other pool installers may have told them.

The one exception to that rule is if he sees the customer about to add something to the pool that may break down on them in the future.

Ken and Cyndi have become friends with many of their customers, and many of them allow Ken to show their pools to other potential customers.

Cyndi said most of their customers come by word-of-mouth.

It hasn’t always been easy. Ken said he enjoys the ability to be creative and give customers exactly what they want, but there aren’t many examples or mentors for him to turn to.

Cyndi said there were times when Ken had to figure out how to do things on the job.

The challenge is rewarding for Ken. He wants to keep pushing the boundaries of creating pools and continue to do things differently than what came before.

The future looks good for the pool installation business. Ken said the industry is growing. In the past, Ken has built pools in Charlotte, Greensboro, Monroe, Mooresville and Winston-Salem, but this year he has been building more local pools.

Ken describes the business as “the most challenging thing I’ve ever done,” but being able to give his customers not just a good pool but the pool of their dreams is a worthwhile endeavor.

Stranded in Louisiana: Salisbury couple find themselves stuck on…