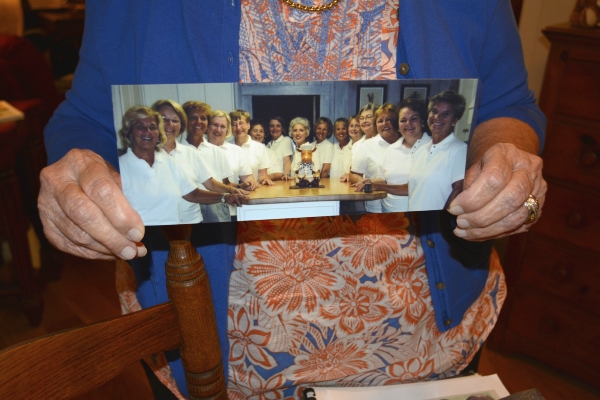 To understand the tightly woven bonds of the Boyden Beach Bunnies, you’ve got to go back to the summer of 1960.

That’s the year Araminta Harris took a group of rising freshmen to the beach. The girls had met at Knox, when it was a brand-new school. Those girls were part of the first class of eighth-graders from Knox. They went to the beach together for five summers before going their separate ways in college.

Fast-forward to their 30th reunion in 1994. The Boyden Beach Bunnies decided it was high time to start getting together again. Montye Harris Furr called her mother and dad, Burt, from the Holiday Inn, where the reunion was being held.

Would it be all right if the girls used the couple’s mountain home, she asked.

“They thought it was a great idea,” she says, and a longstanding tradition was reignited.

This summer, the Boyden Beach Bunnies celebrated 20 years of beach trips at the summer cottage of another classmate, Gregory Peeler Anderson of Atlanta.

Because many of the girls have been teachers, they also started getting together at Judy’s house over the long Martin Luther King Jr. weekend. That started after Judy returned from teaching a year in England in 2002.

Truth be told, they love any excuse to get together, as several gathered for an afternoon at Judy’s last week. They pore over scads of photographs, which brings up oodles of shared memories. They’ve even put together a book of photos.

Here’s the picture from the first summer they went to the beach unchaperoned. Jackie is wearing a bikini, and a couple of the girls are — gasp! — holding cigarettes.

Well, maybe not too daring. They’d learned well from Araminta, their longtime chaperone.

“Mom told the girls, ‘The first time I catch you doing something you shouldn’t be, I’m putting you on the bus and sending you home,’” Montye says. “And she meant it.”

Judy remembers multiple meetings in the early years about the food they would bring and how many loaves of bread they’d need for sandwiches.

“There were no grocery stores at the beach then,” she says.

The trips nowadays are even more organized. The first year they returned to the beach, the 15-member group tried to eat out.

So instead of eating out, the girls break into teams of three or four. Each day, a team puts out food for breakfast and lunch, then cooks dinner and cleans up. The table is beautifully decorated in the theme of the week, and the girls celebrate everyone’s birthdays on Birthday Night.

For the past 20 years, Jackie has made T-shirts for the girls with a chosen theme, and includes the names the girls select to coordinate with the theme.

Over the years, there have been plenty of costumes to match the theme as well.

“Betsy dresses up as the theme and goes out on the beach,” Jackie says, pointing to a photo of Betsy dressed in black and white, the penguin theme. “Isn’t it crazy?”

Lynn puts calendars together for each of the girls. Oh, this group shares plenty of traditions!

“Our first night is always barbecue from Salisbury, either Richard’s or College Barbecue,” Jackie says.

“Because so many of the girls can’t get barbecue or Cheerwine,” Vicki explains.

The girls relish every time they can get together, Montye says. “We went from not seeing each other from going to the mountains to Gregory’s house at the beach to Judy’s house.”

They’ve been together through marriage, divorce, the births of their children and grandchildren, and the deaths of their parents. Burt is the group’s sole surviving parent.

They’ve even been together through injuries. One summer, Montye turned her ankle going to a funeral and fell, breaking her left ankle and left arm. But there she is in the group photograph, casts and all. Later, Jackie broke her leg, and didn’t think she could make it to the beach.

“The bunnies said, ‘You’re coming! We’ll take care of you,’” Jackie says. “They gave me a group shower. No! Don’t put that in there. But they were so good to me. They took such good care of me.”

The girls take care of each other, spend time on the beach together, eat together and laugh together. There’s always lots of laugher.

“Oh, I have to tell you the joke,” Judy says. “After my divorce, I told the girls that I met a guy at the grocery store named Tyson. I said he was going to come to see us at the beach. So I dressed up in a rooster costume and came to the door. It was the year of the chicken.”

A guy. In the meat department. Named Tyson. Get it?

“We couldn’t believe she pulled our leg and we fell for it,” Vicki says.

One year, they all brought their wedding gowns to see if they still fit.

“Three of us had the exact same wedding dress,” Vicki says. “We all got them at Oestreicher’s.”

This year, the girls are turning 70. Barbara was first, and Betsy will be last. Burt placed the altar flowers at St. John’s Lutheran Church in honor of Montye’s 70th birthday, and in memory of his beloved Araminta.

Next year, many of the girls will be celebrating their 50th wedding anniversaries.

After a quick count, they realize they have 23 children among them.

“Gosh, we’ve got quite a lot of low producers,” Jackie notes.

But it doesn’t take much thought for the girls to explain why these friendships remain so strong after all these years.

“These people are the only people who knew my mom and dad,” Vicki says. “They were with me when my brother was born my junior year of high school. You have friends, but they can’t relate to your family, because they didn’t know them.”

“A lot of our parents were really good friends, and our siblings were around the same age,” Barbara says.

“Salisbury was a great place to grow up,” Montye says.

While Araminta was still alive, the group dedicated a tree in Hurley Park in her honor.

“She’s the one who got us going,” Barbara says.

And the Boyden Beach Bunnies have no plans to stop.