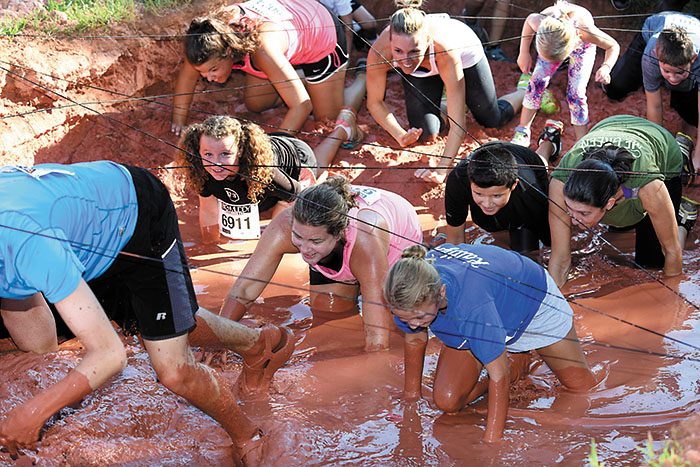 The Big Muddy Challenge participates have to crawl under the strings on hands and knees in a mud pit as the first challenge in the mud. photo by Wayne Hinshaw, for the Salisbury Post

MILLBRIDGE — What is it about head-to-toe mud — the penetrating, staining, red clay kind of mud — that brings families together?

“It was awesome,” a splattered Becca Jones of Charlotte said after her husband and their two girls, Hanleigh and Brayden, conquered the Big Muddy Challenge at Patterson Farm on Saturday morning.

The family of four ran/walked for 2.5 miles up and down, in and out, over and through a rolling farmland obstacle course of mud holes, mud piles, ropes and water slides.

Hanleigh Jones, 6, was a little skeptical at first.

“After she got in the mud the first time, she loved it,” her mother said.

The Joneses used the Big Muddy Challenge to meet up with two other families — one from Greensboro and the other from Newton. And that was the kind of story repeated often among the 1,500 to 2,000 participants Saturday.

This was all about family.

The Big Muddy Challenge was even a place for reunions. Lisa Watson, who lives in Arkansas, read about the event at Patterson Farm online and thought it was a perfect way to meet up with family from Holden Beach and Calabash.

So the families of White, Holden, Solano, Crumpler and Watson converged on the Patterson Farm course, which is challenging but fun, especially because you’re doing it with friends and family and as part of a team.

“We see so many different generations on the teams, ” said Big Muddy Challenge founder Adam Spisak, noting that participants have ranged in age from 6 to 82.

His own BMC team started the excavations on Patterson Farm a week earlier, then descended on the site full-time starting Wednesday to get the course ready.

“We’re thrilled to be able to work with them again,” Michelle Patterson said, and she was happy to hear about all the different places from which participants had come.

“It brings people to the farm who have not heard of it otherwise,” she said. “Of course, we love them coming to Rowan County.”

Besides the obstacle course, Patterson Farm Market & Tours offered its regular picnic areas, playgrounds, Treasure Mine, petting zoo, the barn and store. Chicken sandwiches and ice cream were among the eats available.

Lyndsey Lipford and her 6-year-old son, Luke, tackled the course together while her husband stayed behind with their new baby.

“I didn’t have a least favorite part,” Lyndsey said. Young Luke started off strong, but sort of tired at the end, his mother said. “It’s all a lot of fun,” she added.

Jennifer Langley of Kannapolis might have had the best description for the muddy challenge.

Langley and Ali Farabee were among a group of baseball moms taking on the Big Muddy Challenge with kids from the Kannapolis Cannons, a Dixie League team. It was a good way to mark the end of their season.

Steven and Deanna Deal of Taylorsville brought their three young children to get muddy with them — Logan, Cooper and Lucy. Likewise, Steve and Sarah Krombolz of Huntersville tackled the course with their two daughters and a friend’s son.

Jon Lippard of Salisbury and his son, Isaac, took the water slide toward the end of the course with a passion. Isaac went first, diving down the hill before splashing into a muddy ditch at the bottom.

His dad came in hot right behind him. “I told him when we get to the bottom, you better move,” Jon said.

Isaac said his favorite part of the trip was the slide and his least favorite was the running between each obstacle.

Remmie Hines of Fort Lawn, S.C., ran the course with her 8-year-old daughter, among others, and she praised the event and how nice the BMC staff were.

Susan Etheridge of Havelock was a volunteer BMC staff member at the course’s last obstacle — many ropes strung between two flatbed trailers. The participants could try to crawl under all the ropes, or make their way climbing through them — it didn’t matter.

“I’ve seen that they’re tired,” Etheridge said of the people coming past her on the way to the finish line, “but not overly tired. And a lot of smiles.”

She and her 7-year-old son were scheduled to tackle the BMC route at 12:30 p.m. For volunteering, she received a discounted rate for the challenge. Overall, she was impressed with the whole BMC approach.

“I love that they’re doing it with family,” Etheridge said.

Who needs a notched dog tag to identify great…