Stranded in Louisiana: Salisbury couple find themselves stuck on interstate for 22 hours 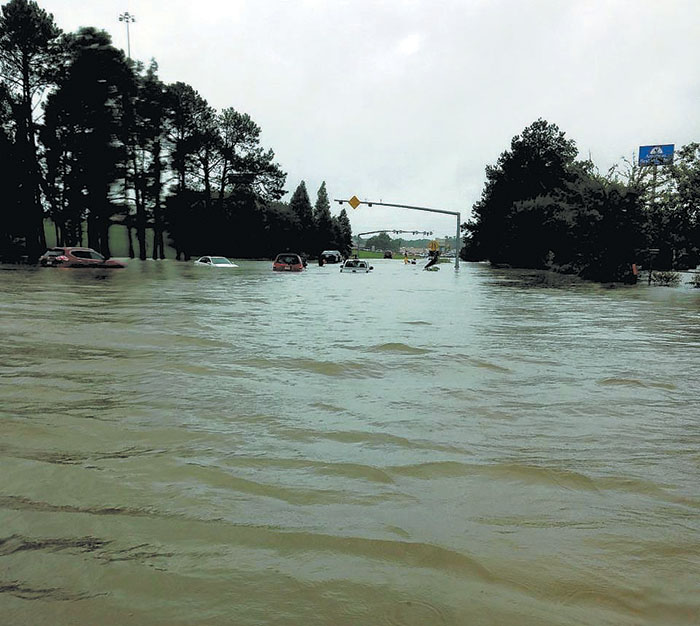 Photo courtesy of Jim and Susan Beard Taken from the Beards' rental car, this is the severe flooding they faced looking toward the western entrance ramp to Interstate 12, on which a truck was already stranded. The Beards wanted to go east and found a clear entrance to I-12 farther down the road, but were eventually stranded on the interstate for 22 hours.

A week ago, Jim and Susan Beard of Salisbury were in a pickle. For 22 hours, they were stranded on Interstate 12 in Louisiana when Noah’s Ark-type flooding had blocked the highway in both the east and west directions.

In their rental car, a Nissan Sentra, the Beards had a half bag of Chips Ahoy cookies, four small cans of hot Coke Zero and a bottle of water.

Farther away, back in Baker, Susan’s niece and her husband already had lost two cars and their trailer. Her brother-in-law managed to get out of his apartment with only a bag of belongings. He would lose everything else to the rising waters.

In front of them and behind them on I-12, the Beards couldn’t see the end of the stranded vehicles. It was hot — Louisiana summer hot — and when everyone on the interstate realized they were not going anywhere for a long time to come, their better nature seemed to take over.

“By that time, we had become a community,” Susan said.

The Beards made friends with a couple who had two young children and were heading for Disney World. Not too far away, the driver of a produce truck began giving his stuff away. The Beards enjoyed strawberries, blueberries and watermelon.

Others shared their extra bottles of water.

It surprised Susan, but she actually slept pretty well that night in their little Sentra.

The Beards are back home in Salisbury now. Jim, 73, is a retired professor at Catawba College; Susan, 68, is an author and retired guidance counselor.

As they watch the tragedy of  the Louisiana flooding still unfolding on television, the couple feel a bit sheepish, knowing their small ordeal is nothing compared to the catastrophic loss of life and property that has occurred in Susan’s home state.

Twenty-two hours stranded on an interstate is nothing.

The Beards were only supposed to be in Louisiana for three days. Susan, a native of Baker, La., wanted to attend her 50th high school reunion. She had missed several other important milestone reunions, for 0reasons such as pregnancy and deaths in the family.

They flew out of Charlotte for New Orelans about 7:30 a.m. on Aug. 12, a Friday, and after renting their Sentra in New Orleans, they headed off toward Baton Rouge, about an hour away. It was raining, pretty hard.

Baker is a suburb of Baton Rouge, and when they arrived at the hotel they had booked, they were a bit uneasy seeing flooding on the road near the hotel. They called from that hotel and booked a room instead at the Hampton Inn in Denham Springs.

The Beards telephoned Susan’s niece and told her they would meet her the next morning. While they slept that night in Denham Springs, it kept raining. When they spoke with Susan’s niece again on Saturday morning, she warned them not to drive toward her because the road was blocked.

Meanwhile, Jim and Susan found out the reunion has been canceled. Soon, they also learned the niece’s home was besieged by water. A nephew advised them to get out of town, and the Beards decided things were serious enough they should head back to the airport in New Orleans.

It wasn’t that simple. Water already was about 18 inches high in parts of the hotel parking lot. Jim advised Susan to take off her shoes and socks to make it to the car.

On the road, they quickly met a river of water, and their path to the eastern ramp onto I-12 was blocked.

Susan credits Jim’s aggressive driving for keeping them from getting bogged down and headed on a road that ran parallel to I-12. After about 12 minutes on that highway, they saw a chance to turn left and get onto I-12 east.

It was an overpass, so the road wasn’t flooded. Their plan was to take I-12 to Highway 55 to I-10. For a while, the traffic moved slowly in spurts, but soon it stopped completely.

Flooding had blocked I-12 before its junction with Highway 55. I-12 to the west also was flooded and closed. The Beards and all the other vehicles around them were on an island.

Their ordeal began about 1 p.m. that Saturday, and it wouldn’t end until about 11 a.m. the following day when the Beards were allowed to hop on a National Guard truck.

Word spread that the National Guard wanted to take elderly people and anyone with medical conditions first. “We really didn’t know what to do,” Susan said.

She and Jim never think of themselves as elderly, but they were encouraged to get in the National Guard truck with about 18 others.

They boarded the truck and never saw their rental car again.

The National Guard transported them to a school bus, which delivered the couple to a shelter in Hammond. It was a city recreation center where people were crammed in “body-to-body,” Susan said.

Word soon spread that 150 more people were heading to this shelter.

Susan told Jim she didn’t think she could stay, so they had enough charge in one of their telephones to reach son David in Washington, D.C. On his computer, David booked them a room in the nearest available hotel.

A volunteer at the shelter drove them to the hotel, where they spent a more restful night.

While they were at the shelter, the Beards were close to a mother and her 8-year-old daughter who had lost everything.

“We kept looking around us and said, ‘We’re pretty fortunate,'” Jim said. “Compared to what was around us, we were in pretty good shape.”

Susan says she still has about 40 first cousins on her mother’s side of the family in this area of Louisiana, and the next morning (a Monday) one of the cousins volunteered to drive them to the airport in New Orleans.

“It was such a loving act,” Susan said.

The Beards flew out of New Orleans on the same flight they had planned to take a day earlier. As far as he knows, Jim says, the airline did not charge them extra.

As for their rental car, it was towed away and impounded. Jim says the couple had to pay the towing fee. Jim adds they have yet to be billed for the hotel room in Denham Springs. They heard the hotel eventually was flooded out and shut down.

In hindsight, the Beards said, they should have realized things were serious with the unprecedented rains and flooding when so many people were trying to check into their Denham Springs hotel that Friday at 12:30 p.m.

“It’s hard for reality to set in,” Susan said. “… It’s such a huge experience and so disorienting,”

A lot of things happened in 24 hours.

One takeaway for the Beards was how people in Louisiana were feeling as though the rest of the nation were ignoring them, not realizing how big of a crisis they are in.

“You feel abandoned by everyone,” Susan says.