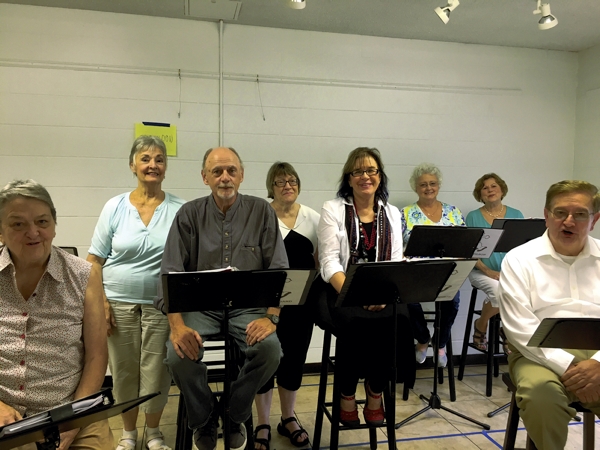 Don’t let the title of Andrea (Andy) Rassler’s latest play fool you. Bless Me, Father might sound weighty, but it’s the stuff of classic comedy, inspired, says Rassler, “by a long observation that sometimes the people who are the ‘religious’ ones are the quickest to suspect and judge others.”

Rassler, a resident of Concord, has taught high-school drama for 23 years, 21 of those at Northwest Cabarrus High School, where she has earned Teacher of the Year honors and statewide awards for directing. Although writing at first seemed “mysterious” and beyond her “realm,” Rassler knew the what would work for her students. “Strange as it may seem, I was having a really hard time finding the exact right fit for our needs in the existing catalogues of plays,” she says.

I was fortunate enough to read an early draft, and I told Rassler that St. Thomas Players had just started a readers’ theatre company, The Phoenix Readers, that might be interested in presenting her play once it was finished.

The Phoenix Readers is the brainchild of Jim Epperson, Catawba Professor Emeritus. A couple of years ago, he approached me about starting a readers’ theatre company at the same time I’d been thinking of instituting a “55 and older” arm of our all-volunteer organization.  Epperson is A Very Big Deal in the theatre world, with credentials, awards, and accolades too numerous to mention. What’s most relevant here is that he was active with the Kennedy Center/American College Theatre Festival, serving first as its North Carolina playwriting chair and then later on its board and as playwriting chair for the Southeast Region. It’s fair to say that Epperson has helped to develop hundreds of new plays.

When asked what he likes best about Bless Me, Father, Epperson says, “Andy’s writing. Her rhythm, the concept, the characters, who are so clearly individual but who play so well off of one another.” Rather than cast within the established group of readers, Epperson opened the auditions up to the community. Rassler has had her work produced before, but never has she had the opportunity to hear it out loud first, revise and explore, ask questions. “The process has been a gift,” she says. “I’m still pinching myself.”

Bless Me, Father will be performed in the lobby of Lee Street theatre on Friday, August 26, and Saturday, August 27, at 7:30 pm. Tickets are $10 at the door, first-come, first-served, cash or check, made payable to Center for Faith & the Arts.