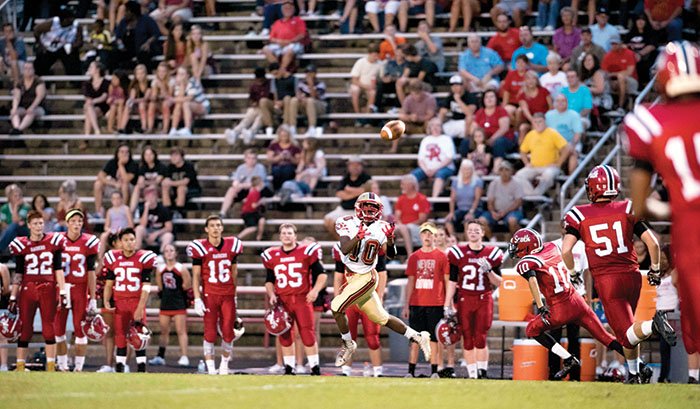 Making his varsity debut for the Hornets (1-0), Baker broke free for three big-play touchdowns in a five-minute span of the second quarter to turn a tight 6-3 contest into a lopsided lead by halftime. A 5-8, 155 pound junior speedster, Baker snagged a 70-yard pass from quarterback Griffin Myers, then followed that quickly with a 50-yard TD catch over the middle from Myers. The onslaught continued on the next possession as Baker sprinted around left end for a 23-yard scoring run with 3:44 left in the half.

Suddenly, it was 25-3 and the Hornet defense made sure it stood with two recovered fumbles and five total interceptions for the game.

“I just was able to get open,” said Baker of his two quick-fire TD catches. “We have been practicing these plays and they told me it would be open and it was. He (Myers) put it in the exact right spot.”

Equally impressive was the junior halfback Austin, a 190-pound power halfback. He opened the scoring late in the first quarter with a 21-yard quick hitter up the middle then closed it out in the fourth quarter with a 37-yard sprint around right end. The effort gave Austin a team-leading 83 yards on 9 carries.

‘The option and read broke big for us tonight” Austin stated. “I was running hard and their defensive backs were giving me room. We have got some work to do and get things corrected but we will get better.”

Hornet coach Ryan Crowder was pleased with the breakout performances by his two young runners as well as the way his quarterback Myers ran the option attack.

“We have some great players here but they kind of were under radar because no one really knew who they were,” Crowder said. “But I am sure after today a lot of people will know about Baker and Austin. Griffin ran the offense well for us too and read the option well that enabled us to pop some big plays.”

The Raiders (0-1) also moved the ball well but Salisbury’s defense stifled them with their quickness and a lot of turnovers. South drove to the Salisbury 20 early in the first quarter but Austin Chrismon’s pass was picked off in the end zone by Tyvion Wood, the first of his two interceptions on the night. It was a sign of bad things to come for the Raiders.

South did manage to trim the Salisbury margin to 6-3 as the second quarter opened when Austin Hyde connected on a 27-yard field goal. But on the drive, the Raiders had a first and goal at the two only to see the Hornet defense stuff them on three straight plays.

Salisbury responded emphatically with the Baker and Myers combo striking quickly on three straight possessions. First, Baker snagged a rollout pass on the right side from Myers and sprinted across the field to complete the 70-yard play. A bad South punt gave the Hornets the ball back at midfield and Baker broke wide open over the middle to gather a Myers pass and complete a 50-yard TD play.

South botched a fake punt play on their next possession to give the Hornets the ball at the 23. On the next play, Baker swept around left end to make it 25-3 with 3:44 left in the half. The Raiders tried to respond but an interception in the end zone by Salisbury’s Jaquan Davis ended the half.

The Raiders did finally get in the end zone late in the third period when Chrismon hit Cory Sellars sprinting across the end zone on fourth and goal for a six-yard TD play. Any hopes of a South rally were dashed in the final quarter however, as Austin broke his 37-yard TD run while Wood, Byron Goodlett and Jerleel Allison all had interceptions for the Hornet defense.

“Well anytime you have seven turnovers it makes it almost impossible for you to win,” said South coach Daniel Yow. “But my hat is off to my players. They fought the whole way. We looked tremendously better than this time last year although it did not reflect on the scoreboard but I am telling you, we are a much better team now.”

The Hornets have the same feeling about their prospects for the 2016 campaign as well. “I feel like we are going to be terrific,” Baker said. “When we get a few issues fixed and get things situated, we are going to be really good.”

Although it was not much of a factor, part of the game was played in a light rain and the teams had to endure a 30-minute lightning delay during halftime.

NOTES: South has to try and bounce back this coming Friday with a tough assignment at longtime rival A.L. Brown. The Hornets will host county foe East Rowan next Friday at Ludwig Stadium … As a sophomore, Baker played jayvee football, but also, varsity basketball for the Hornets. He was known as Isaac last year and earned second team All-Rowan County honors.