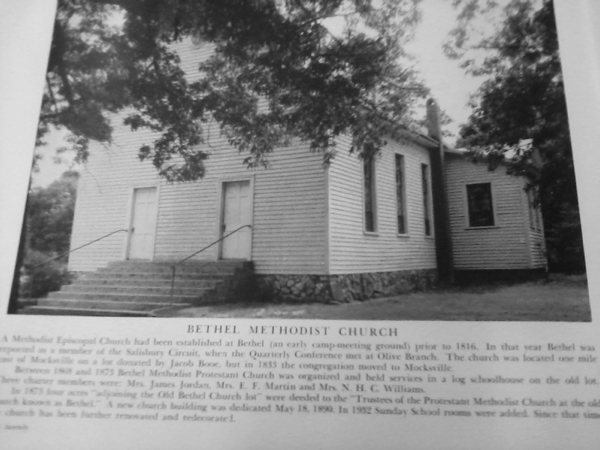 Photo is from the book ‘Churches of Davie County North Carolina’ by Thomas L. Martin, published in 1957.

There will be a covered-dish luncheon in the fellowship hall after the worship service.

The earliest known knowledge of Bethel begins in the year 1816. However prior to that time, a Methodist Episcopal Church South had been established for there was a Camp Meeting Ground here before 1816.

The church was located on two acres of land donated by Jacob Booe. Bethel was reported as a member of the Salisbury Circuit in March 1816, when that Quarterly Conference met at Olive Branch. For a while it was called Moore’s Meeting House and met in a log building with a dirt floor and seats hewn from logs.

An arbor was built and used for several summers. In 1833 some of the congregation moved to Mocksville and formed the First Methodist Church there.

Periodic services were held at the Bethel site as Methodist Circuit Riders stopped at various homes in the community and preached. As a result of this ministry, Bethel Methodist Protestant Church was organized during the period between 1868 and 1873.

On Dec. 9, 1873 four donated acres of land were given and deeded to the Methodist Protestant Church. The land was donated by James Jordan, Sarah Holman, and A. M. Booe.

When the conference met in January 1879 the churches in the circuit were: Bethel, Elbaville, Dulin, Union Chapel and Dutch Meeting House.

For a number of years, the ministers serving Bethel and the Mocksville Circuit came from Yadkin College. They traveled by horse and buggy and stayed in the home of Elijah Martin.

In 1890, the congregation made plans to erect a new building. The building consisted of four walls and had two front doors ­—  a left side door for men and a right side door for the women.

The building was completed and dedicated May 18, 1890. Smaller areas were curtained off with fabric for Sunday school classes. Later a small alcove was added behind the pulpit. The building was heated by a wood-burning stove.

Updates to Bethel continue, and over the past several year the kitchen and fellowship hall have been remodeled, new carpet installed in the sanctuary and class rooms along with a sound system, and a new sign at the front of the building, to name just a few.

Bethel continues to be very mission-minded in its outreach to the community.

A host of people have served the Lord and been influenced by Him as they have worked within the Bethel congregation. Many of their names may have been forgotten, but their contributions remain. Those of us who remain may receive inspiration from the example and sacrifice of those who labored that the Gospel might be preached in the community.

Bethel United Methodist Church will celebrate its 200th Homecoming on Sunday, Aug. 21 at 10:30 am. The Rev. Dr. Jeff Patterson, Yadkin Valley District Superintendent, will be the guest speaker and The Brad Ratledge Band will provide special music for the service.

The Rev. Tony Owens of Spencer is the current pastor and has been with them since 2006. There will be a covered-dish luncheon in the fellowship hall after the worship service.