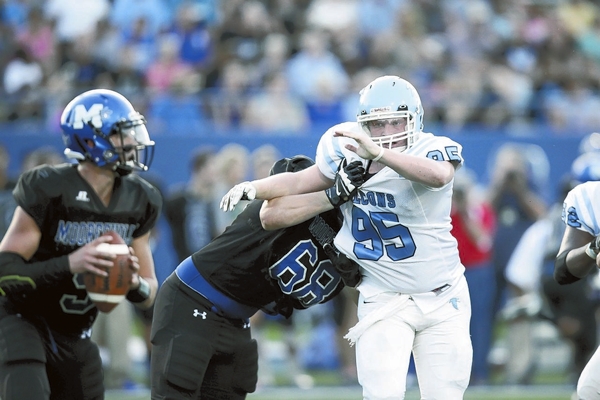 James Sipes/for the Salisbury Post ... West Rowan’s Tyler Wheeler (95) is being held as he tries to get to the quarterback in last season’s opener at Mooresville. West hosts Mooresville tonight in the 2016 opener.

Five Rowan County football teams open the season tonight, with all five playing within the county borders.
Carson won’t get started until next Friday when it hosts North Rowan.
There are two county matchups tonight, involving four teams that had losing records in 2015. These are squads that could really use a confidence-building, 1-0, start.
Which two teams will emerge 1-0, is very much a mystery at this point. Salisbury-South Rowan and East Rowan-North Rowan are basically toss-ups.
West Rowan is once again the best Rowan team, at least, on paper. The Falcons appear ready to end their three-game losing streak against Mooresville.
However, it should be noted that Mooresville has been a pain in the posterior for the Falcons in season openers. The Blue Devils not only were the reason that the last three West teams started 0-1, they ended West’s famous, 46-game winning streak opening night in 2011.
Davie County faces a challenging opener at Greensboro Page, which put 53 on the scoreboard against the War Eagles on opening night in 2015. But there’s hope. Davie won, 45-40, against Page two years ago.
As far as A.L. Brown? Well, the Wonders got off to a nice start against Concord (31-19) on Thursday, despite losing QB Cordarius Butler to injury.

East Rowan at North Rowan
It’s a little bit surprising that North has beaten East five times in a row. The last time the Mustangs topped the Cavaliers was 21-20 in 2010 when Chad Tedder was in command in Granite Quarry, and that was a few coaching changes ago.
North’s recent dominance has pushed its lead in the all-time series to 39-18-1. If that margin is surprising, it’s mostly because North owned the series in the 1980s and 1990s.
North coach Ben Hampton won his first battle with East Rowan last year. East coach Kenneth McClamrock is 0-2 against the Cavaliers.
East was 3-8 last season and had to win its finale just to get to 3-8. North was 5-7 with a very young team, making the 2A playoffs but exiting in the first round.
As far as what happens tonight, East figures to have the more dangerous offense because it has explosive senior Max Wall, a four-year varsity stud who has rushed for 2,632 yards in his career. He’s just 67 yards away from breaking the school rushing record that Cal Hayes Jr. set in 2001.
Hayes also was a four-year varsity player, but he was a receiver as a freshman when he was still small.
Wall was the Dutch Meyer Award winner as the Rowan County Wrestler of the year as a junior, which gives you an idea of how strong and quick he is, and those physical attributes translate well to the football field.
Wall has been been a passer, rusher, receiver, returner and defender at various times in his career and he enters his senior season as a candidate for player of the year.
If you’re wondering how Wall has done against the Cavaliers, as a sophomore he ran back North’s opening kickoff for a touchdown. As a junior he had five catches for 125 yards and he rushed 19 times for 96 yards.
While Wall’s production is a given, the guy who might be the difference-maker for East is QB Tate Houpe, who started strong last season but then dealt with injuries.
It sounds like the Mustangs are turning to an option attack, so it’s going to be interesting to see what Houpe can do running the show. East can always snap it to Wall and let him make things happen, but the Mustangs are a lot harder to defend with both Wall and Houpe on the field.
In general, East got plenty of yards — but not plenty of points — last season, with point production limited by the turnover bug.
East’s defense didn’t fare well last season, allowing nearly 30 points per game, but East plays in the South Piedmont Conference, which is pretty stout.
East’s ‘D’ returns mighty-mite cornerback Wesley Porter, a first team all-county player and All-SPC player.
North comes in with a defense that should be fierce and an offense looking to rebound from a year in which it generally struggled against quality opponents.
Defensively, the Cavaliers have a Division I end in Zion DeBose, the Central Carolina Conference Player of the Year. They also have returning first team all-county players in linebacker Javin Goodine and safety Chris Clodfelter and several all-county second team guys such as nose guard Steven Thurston and tackle Matthew Hoosier.
North’s defense makes the Cavaliers the favorite in the CCC and it should give the Cavs a chance in all of their non-conference games.
If North can limit and mistakes on offense, it has a chance to be a very good team. North has plenty of speed in the backfield. It’s just a matter of getting steady QB play and eliminating turnovers.
North won 24-20 last season, and this one should be just as tight.
Prediction: East Rowan 21, North Rowan 17.

Salisbury at South Rowan
This is really huge for both teams, as both are coming off very difficult seasons. For either program, a 1-0 start would be a shot in the arm.
This game might be especially critical for South, which faces A.L. Brown next week.
Daniel Yow is back for his second year at he helm of the Raiders, while Ryan Crowder enters his fourth season at Salisbury.
Salisbury went 3-8 on the field in 2015 but forfeited those wins after the season due to an ineligible player. Officially, the Hornets went 0-11.
South went 0-11 on the field and was rescued from a winless season in record books only because Salisbury forfeited its 35-20 opening-night victory.
The last time South beat Salisbury on the field was in 2009 when the Blake Houston-Thomas Lowe-B.J.Grant-D’Andre Harris team rolled the Hornets, 38-20. That was a big win for the Raiders on their way to a 9-3 season.
It’s been tough for the Raiders since 2009. That was their last winning season.
South allowed 41.5 points per game last year, while scoring 10.6, so there’s only one way to go.
Salisbury hasn’t had a winning season since 2012.
Salisbury crushed South 56-14 in 2011 and 64-9 in 2012. In that 2012 game, Salisbury QB Brian Bauk had 191 yards on five — yes, five — carries.
The teams did not play in 2013 and 2014 before resuming the rivalry last season, and, by then, things had evened up quite a bit.
The Hornets lost a lot of fine defensive players from last year, although they still have linebacker Tywun Rivens as an anchor on that side of the ball.
Offensively things just didn’t work at all for the Hornets in 2015. They tried to throw it more, and the results were pretty disastrous — one TD pass and 13 picks.
Look for a return to the ground game this season. Marcus Corry, one of last year’s QBs, is fast and strong and should be a fine running back.
South Rowan is expected be led by QB Austin Chrismon. The Raiders have had the county’s best kicking game in recent seasons, but even a strong kicking game isn’t a sure thing now.
Salisbury leads the all-time series 17-7 and has won nine of the last 10 meetings.
Preseason prognosticators aren’t singing the praises of either team. Salisbury is picked fifth in the six-team CCC, while South is picked 10th in the SPC.
This might be South’s best chance all season, and the Raiders are at home.
Prediction: South Rowan 14, Salisbury 12.

Mooresville at West Rowan
Joe Nixon, 10-4 in his West head-coaching debut last year, returns to pilot the Falcons.
Mooresville’s recent success in the series has provided a 25-21 lead in the all-time series.
West will be opening against Mooresville for the 13th time. The Blue Devils hold an 8-5 edge in those openers.
New Mooresville coach Marty Paxton, the Hickory Ridge coach in 2015, takes over a team that went 8-4 and lost in the first round of the 4A state playoffs.
Mooresville returns eight starters — four on each side of the ball — and will be inexperienced, although the Mooresville defense can lean on defensive back Chris Ingram, who has committed to N.C. State.
West Rowan graduated Kacey Otto, the Rowan County Offensive Player of the Year, but the Falcons shouldn’t miss a beat with former receiver Kortez Weeks, calling the shots.
Weeks played some varsity QB as a sophomore before Otto emerged as the starter.
West also returns senior running back Javon Quarles, a track man who has accounted for 1,371 yards the last two seasons.
Mooresville won a 28-26 thriller against the Falcons last season despite two TD receptions by Weeks. The key stat was Mooresville out-rushing the Falcons 285 yards to 122.
West lost a lot of quality, next-level linemen, but Javon Lofton returns to anchor the offensive line, and Devin Turner is back to key the defensive line.
West was 10-4 last season and has a chance to be at that same level. A win against a traditionally good 4A opponent tonight would indicate that the Falcons have a chance to contend for the South Piedmont Conference championship.
Prediction: West 28, Mooresville 17.

Davie County at Greensboro Page
Davie opens against Page for the sixth straight time. The War Eagles won against the Pirates in 2012 and 2014 and will hope to continue that even-year success.
Davie coach Devore Holman starts his fourth season after years of 4-6, 6-6 and 5-7.
Page is coming off a terrific season (13-3) and lost to Mallard Creek in the 4AA championship game.
Page returns 10 starters, including Javon Leak, an All-State candidate at running back.
Davie again will air it out, with dual-threat Chris Reynolds returning after a tremendous season in which he rushed for 745 yards and threw for 2,874. Reynolds accounted for 40 TDs, running and passing. Junior Cooper Wall (67 catches, 1,104 receiving yards, 9 TDs) heads the receving corps.
Linebacker James Boyle is a proven player. He leads the Davie defense.
Page made Davie one-dimensional on offense last season, holding the War Eagles to 38 rushing yards. Page also scored 28 points in the first quarter and 46 in the first half.
Davie has a good chance for a winning season and should make tonight’s action more competitive than last year’s matchup.
Prediction: Page 35, Davie County 21.