Kuechly’s ready: Panthers’ linebacker is itching to tackle someone 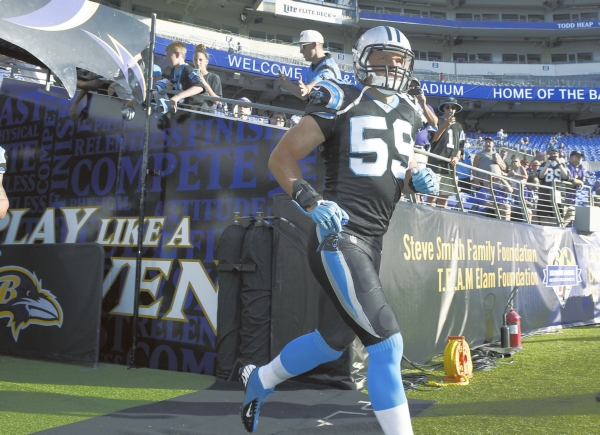 CHARLOTTE (TNS) — Carolina Panthers linebacker Luke Kuechly started last week’s exhibition in Baltimore put only played three snaps. In those three snaps he didn’t record a tackle, and he didn’t really get to hit anyone.

As the Panthers prepare to face Tennessee on Saturday, Kuechly will look to tackle someone to the ground for the first time since Super Bowl 50.

Kuechly’s offseason saw the three-time All-Pro linebacker undergo shoulder surgery after he tore his labrum late in the season and played through it. Carolina took it easy on him during spring and summer workouts, and he was full-go at training camp.

“It’s hard to mimic (tackling),” Kuechly said Thursday after a hot practice back in Charlotte. “We do a lot of good drills to mimic fitting up and getting to the ball, but there’s something different in a live game actually going up and tackling someone.

“These games give you an opportunity to be full speed in a game, really get off blocks and get around the ball and make tackles.”

Kuechly, who has the second-most tackles in the NFL since he entered the league in 2012, should get ample opportunities to tackle in his short time on the field this weekend.

Tennessee’s line is still figuring itself out, though it has good pieces. The Titans seem to be lacking in quality receivers, but the backfield is deep.

There’s dual-threat quarterback Marcus Mariota (who shouldn’t be a run threat in the preseason) along with running backs DeMarco Murray and Heisman Trophy winner Derrick Henry.

Murray broke off a 71-yard touchdown run last week in the exhibition against San Diego, and the Titans are sure to test their run game against Carolina’s defensive front.

“They have two guys who are physical runners,” Kuechly said. “DeMarco is a year removed from leading the NFL in rushing and obviously last year didn’t go how he wanted it to, but he’s still DeMarco. He’s still physical and still has good burst. … Obviously everyone has seen what Derrick Henry can do. Their offensive is big and they move well, so it’ll be a big game for us.”

It’s unclear how much Kuechly will play on Saturday, but anything past the first quarter would be a surprise. That should be enough time for him to wrap up and tackle a few runners and possibly even blitz the quarterback.

Kuechly has never been much of a blitzer in his four seasons in Carolina. He has seven career sacks, only one last season.

Part of that is because it’s tough for defensive coordinator Sean McDermott to take one of the best cover linebackers in the league out of coverage.

Two offseasons ago, Kuechly began focusing on his downfield pass coverage, most notably after his hug of New England tight end Rob Gronkowski in a controversial Monday night victory over the Patriots. He racked up a career-high 12 passes defensed the following season, and in 2015 he tied a career-high with four interceptions.

Now he’s working on getting to the quarterback more effectively.

“For the most part he’s a downhill blitzer,” said Panthers coach Ron Rivera, a former linebacker. “And when you’re a downhill blitzer you tend to run into people. So what you have seen is him evolve and learn to get on the attack edges and counter. That’s the probably the biggest thing, especially when we do the one-on-one stuff. You see him getting more on the edges.”

Kuechly had some of the best one-on-one battles of training camp when he went against Jonathan Stewart in blitz pickup drills. Though Kuechly sometimes matched up against fullback Mike Tolbert or tight end Greg Olsen, the meetings with Stewart always delivered in a great give-and-take throughout camp.

In live action, though, it’s more than just meeting a running back in the backfield. With 10 other players on the field, Kuechly has to consciously think about his plan.

“You can’t just run in there and expect to get to the quarterback,” Kuechly said. “There’s good backs, good linemen, good protection that’s designed so it’s not easy to get there. A lot of it’s technique. A lot of it’s designed with the mindset that this is what my plan’s going to be.”