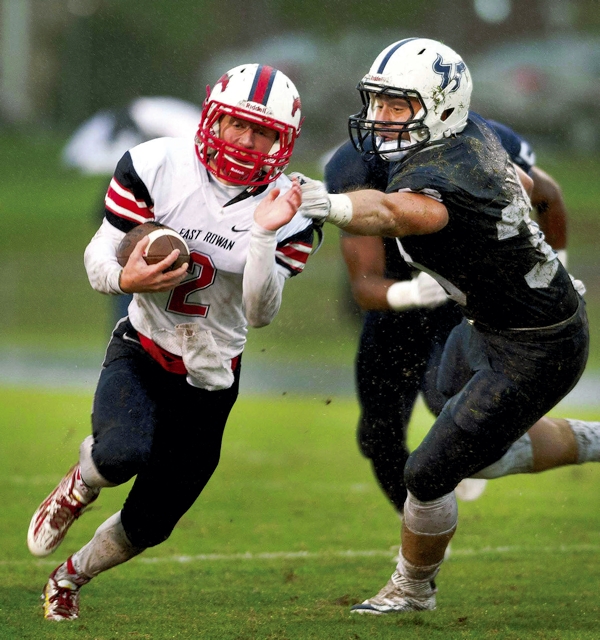 GRANITE QUARRY – There are a couple of things you need to know about East Rowan defensive wiz Wesley Porter: Great things come in small packages; and when your team has the ball in play, Porter will take it away from you.

The 5-8, 152-pound senior is not an imposing physical specimen but his resume and skill set have established Porter as likely the top defensive/special teams’ player in the county.

“He is definitely the heart and soul of our defense,” Mustang coach Kenneth McClamrock says,” We always expect Wesley to make the big play for us.”

Porter is a two-time All-South Piedmont and All-Rowan County defensive back. During his sophomore season, he intercepted four passes, pounced on three fumbles, blocked two punts and recovered three onside kicks. He followed that up last season with four more interceptions, including a pick-six against Central Cabarrus, plus 57 tackles and a sack. Add to that 454 kick return yards and 125 punt return yards. For his career, Porter has recorded 96 total tackles, 70 of them solo plus 17 pass deflections.

A large part of his success is his ability to create turnovers while totally ignoring any size mismatches he may encounter along the way.

“Any time the ball is in the air I feel it is not just his ball, it is my ball too.” Porter says. As far as his size being any type of disadvantage, he just does not see it that way. “I have never felt over matched due my size,” he says. “That is never a factor with me. Just because you might be bigger than me that doesn’t mean I can’t make a play on you.”

Porter will now get to take that attitude and his work ethic to the other side of the line for his senior season. McClamrock has indicated Porter will be in the mix at wide receiver and in the slot in certain situations —maybe even at running back.

“I am looking forward to that,” he says. “I definitely want the ball in my hands as much as possible this season. I worked all summer at wide receiver and know all the plays so right now I am looking at starting both ways and being in on at least half the snaps on offense this season.”

He did see limited action last season as a running back, gaining 78 yards on eight carries but looks to expand on that number significantly this season.

Porter is equally optimistic about the Mustangs upcoming season. “I have very high expectations for our team coming into this season,” he says. “I hope this will be our best run in a while. We have a lot of key players back and we have had a lot of new players step up in the off-season and are ready to help. Everything is starting to come together now.”

Once the season is over, Porter also has high hopes of getting a chance to play college football. “I have talked to a good number of colleges and I am definitely looking to play at the next level,” he says. “There are coaches out there who are willing to give me a shot. A lot depends on how this season goes, of course.”

Not that Porter needs any further motivation to excel on the football in his final season. He has been slowed a bit in the pre-season with a muscle issue in his back but he expects to be ready to go full-speed when the Mustangs open their new season this Friday at North Rowan.