Who needs a notched dog tag to identify great men? 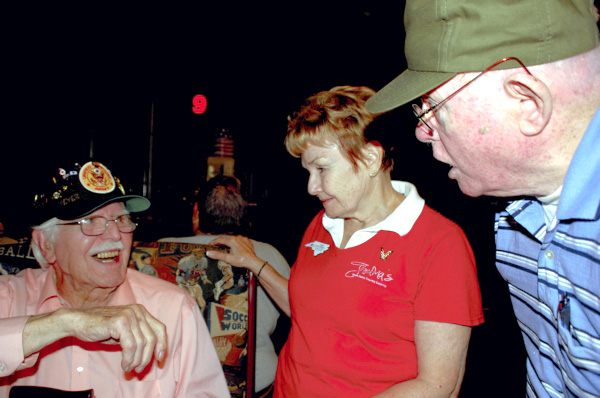 SALISBURY — You can’t walk the length of two foxholes during the Tuesday morning coffeehouse for veterans at Thelma’s restaurant without having a story kick you in the face.

That’s the way it was this past Tuesday. In short order, while the veterans were enjoying their coffee, doughnuts and conversation, I came upon 95-year-old World War II veteran Staley Johnson of Kannapolis and his shadowbox.

And before I left, I was feeling deep regret that I had never met Fred Phillips and Ken Scribner, two regulars — and friends — who had passed away within two weeks of each other this month.

First, about that shadowbox. Johnson grew up in Kannapolis on Rose Avenue, and before World War II, he was working in the No. 2 Card Room at Cannon Mills.

Johnson joined the Army Dec. 6, 1941, a day before the attack on Peal Harbor. He landed in Normandy not long after D-Day and was part of Allied Forces marching across Europe into Germany, leading to the Nazi surrender.

“I started it, and I ended it,” Johnson likes to say.

Johnson’s winning trek included Normandy, Brittany, Ardennes, the Rhineland and Central Europe. He was shot in the back in France on July 27, 1944.

A brief newspaper article back home reported the incident. “Latest reports from the war department are that he is improving rapidly,” it said.

Johnson told me his company was about 40 miles from Berlin when Germany surrendered.

“Hitler heard he was coming and shot himself,” said Johnson’s nephew, Coite Jenkins. Jenkins has heard his uncle say that many times.

On the table in front of him, Johnson had the large-sized shadowbox holding many of his personal items from World War II, including his Purple Heart and Bronze Star and numerous medals of the European campaigns he was involved in from June 1944 to May 1945.

His dog tags are in the case, and when Vietnam veteran Ralph Swinson stopped by Johnson’s booth, I learned something I didn’t know or failed to remember about old dog tags. Swinson said they had small V-shaped notches on the end of the tag.

That way, if you died on the battlefield, the tag could be shoved into your mouth between the teeth to help with identification later.

We picked up the shadowbox to get a better look, and sure enough, Johnson’s tag had that notch.

Johnson also had saved some foreign money, patches with various insignia and photos of him in uniform. Jenkins made sure his uncle had brought a few other war-related items, such as the tiny roll of toilet paper the infantry carried.

The shadowbox also had a few Nazi buttons and patches. Johnson had brought with him a sizable Nazi flag he had taken off a flagpole outside of a government building in Germany. He said he has a German rifle, helmet and cap among other Nazi items at home — stuff he picked up along the way.

Johnson went on to log some service time in the Pacific and during the occupation of Japan. He recalled walking halfway up Mount Fuji during one of his breaks.

Johnson married a nice girl named Victoria, his late wife, and they had four children. Back in Kannapolis, he returned to Cannon Mills and eventually rose to assistant overseer of the dye department. He retired in the 1980s, about the time David Murdock bought the company.

Johnson still lives in the house in Kannapolis on Cub Street that he built with a friend.

David Swinson, a fellow Army veteran and brother to Ralph, also came to Johnson’s table to look at the shadowbox. “I love this kind of stuff,” David told Johnson. “We thank you for everything you did.”

Jenkins tries to visit his uncle as much as he can. He said Staley once gave his late son, Staley Jr., one of his kidneys. “I didn’t give it, they took it,” Staley protested.

Staley Jr. was a Vietnam veteran.

Every Tuesday morning at the coffeehouse for veterans, time is set aside for announcements and a few comments from the rank and file. Tom Harrell leads these discussions, and he informed everybody of the death of Ken Scribner about 12:15 a.m. that same day.

“I went to see him yesterday,” Harrell told the group.

In the hospital room. Harrell called out Scribner’s name and grabbed his big toe.

Scribner was a widower with no children. Harrell had known him for about 20 years. Scribner, Harrell, Fred Phillips, Larry Smith and George Summers were all part of the China-Burma-India Veterans Association that Harrell said went out of business in 2005.

But a handful of these “CBI” vets kept in touch, and the coffeehouse in Salisbury provided one more gathering place. Fred was living at the Oak Park retirement community, and Scribner would drive each Tuesday from Yadkinville.

Scribner and Phillips, who died Aug. 2, usually sat together at the coffeehouse, reminiscing sometimes about their trips on the Burma Road and Gen. Joe Stilwell, who commanded U.S. forces in that theater.

Harrell said the harrowing Burma (Ledo) Road had 43 switchbacks along the ridge. Every truck pulled a trailer of munitions — efforts that tried to keep Chinese forces supplied against the Japanese.

Harrell said the U.S.-China forces in Burma fought against Japanese Imperial Marines, many of whom were over 6 feet tall, coming from the northernmost island in the Japanese empire.

“A mean bunch of pig farmers,” Harrell said, “who liked to skin the guys they captured.”

Harrell spoke with great respect of Scribner and Phillips. Think of it, two men who had traveled the Burma Road who were regulars at Thelma’s drinking coffee together.

Harrell said Scribner was a pretty amazing fellow. He had only a fifth-grade education, yet he went on to design engines for Cadillac Motor. A great old-car enthusiast, he had collected three Hupmobiles, cars that were built until 1940 by the Hupp Motor Co.

Harrell said Scribner also restored a 1934 Ford flatbed truck that only a few years ago he donated to the Civilian Conservation Corps Museum. That truck had to have a minimum value of $65,000, Harrell said.

As for Phillips, the brief biography given in the bulletin at his funeral said he was “adventurous and loved the great outdoors, dancing and the occasional sip of whiskey.” He was 94 when he died.

During World War II, Phillips served in the Army Air Corps as a flight surgeon assistant, “and spoke of many heroic stories on the Burma Road.” He would go on to be an iron worker in Buffalo and also held various positions with telephone companies in New York and Florida.

A widower like Scribner, Phillips is survived by many children, grandchildren and great -grandchildren. At his funeral, Harrell told me, three different women at Oak Park stood up and said how they loved to dance with Phillips.

“He could dance, and he loved to dance,” Harrell said. “… I would say he was a big-time flirt.”

Harrell and I agreed that if we had our lives to do over again, we would learn to dance and dance well at a young age.

Some time back, Harrell and the rest of his China-Burma-India buddies bought a bottle of liquor and agreed the last two standing could break the seal and drink to themselves and the friends who had left this earth before them.

Now there are three — Harrell, Smith and Summers.

These veterans at Thelma’s truly are great men. I danced all the way back to the office.