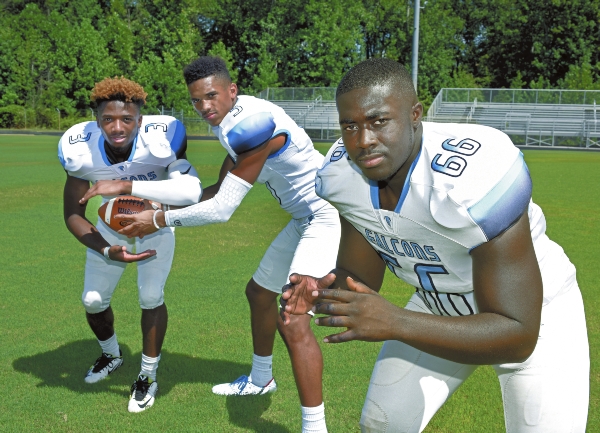 MOUNT ULLA — West Rowan’s all-conference, action-hero wide receiver is promising to pump up the volume this season — as the team’s new quarterback.

Senior Kortez Weeks is oozing confidence as he morphs from pass-catcher to pass-thrower, a transition he believes will lead the Falcons back into the state playoffs.

“When they told me back in January that they may need me to step in, my reaction was, ‘I’ll do it. I’ll do whatever it takes to help us win.'” Weeks said before a recent practice. “Right away, it became my focus. All summer I’ve been working on reads, working on conditioning, working on making this work.”

So far, so good for the 6-foot-1, 175-pounder, who acknowledges he’s taking one for the team. In pre-season drills he’s been a cool customer, a student of the game who has shown a flair for improvising.

“I really didn’t have to think about switching positions,” said Weeks, who replaces Swiss-army-knife QB Kacey Otto under center. “I played quarterback my freshman year on jayvee and I know I can get the job done on varsity.”

Weeks has an above-average arm and 4.5 speed in the 40, so he’s well-equipped to take the wheel of an offense that cruised like a Porche on an L.A. freeway last year. Sure, he’s heard the whispers about West’s inexperienced offensive line — a potential party-wrecker — but pays them little mind.

“I’m going to keep my composure,” he said with a pensive look. “I just have to get my O-line right. There’s going to be adversity, we know that. But we all have to play together and it’s up to me to lead the team.”

“He’s a big-time, Friday night player,” Sherrill lauded. “He knows the speed of the game. As a coaching staff, all we have to do is put him in position to mix it up and go be the superior athlete he is.”

Even if that position is wide out. Weeks knows he’s only renting space in West’s backfield after racking up headline-grabbing numbers as a receiver a year ago. He’s already drawn luke-warm interest from collegiate programs near and far — including Campbell, Richmond, William & Mary, Appalachian State and Liberty.

“I’ll play anywhere for this team,” he said. “I was a solid receiver last year, but coming in as a quarterback you need a different mindset. You have to take the lead. I’m ready to do this, ready to put on the pads and go out there.”

Police say Lochte, others not robbed