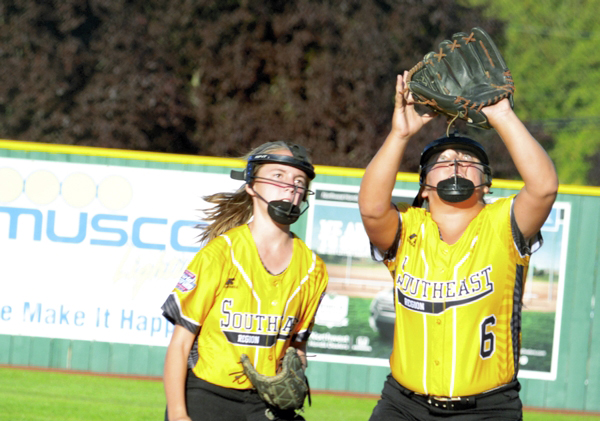 Rowan's Kary Hales gets under a pop-up next to first base for the final out in the first inning of Wednesday's title game.

There was only one bad inning but it was enough to turn the game.

So, Rowan, the Southeast Region champs, fell short of its goal, but one championship and then a runner-up finish on national TV in two consecutive years isn’t bad for these 10 thru 12-year-old girls.

They became “rock stars” after last year’s title run and they’ll still be big shots when school starts next week.

“Not the result we were looking for, but I couldn’t be any more proud of these girls,” said Rowan head coach Steve Yang. “We came up one game short and this one game doesn’t define the kind of season we had or the true character of this team.

“We would have liked to have won, but we just didn’t play well enough,” Yang added.

Rowan pitching ace Taylor Walton, dominate all week as her team went 6-0 before last night, ran into trouble in the third inning. She gave up five hits in the inning, although some were just grounders hit in just the right spot.

“Not taking anything away from Texas, but a couple of those hits were seeing-eye singles that just made it through the infield,” said Yang. “If we could have limited the damage there, it may have been a different game, but it kind of got away from us there. Last year, we had one big inning and won and this year, our opponent had the big inning.”

Walton walked Avery Rangel to start the fateful third frame, then yielded a single through the right side to the ninth-place batter, Gabriela Vela.

Leadoff batter Jada Munoz then singled to rightfield, putting Texas, the Southwest Regional champ, up 1-0. Walton then retired a batter before walking Annika Litterio, also the pitcher and dangerous third hitter in the lineup.

With the bases loaded, Jackie Kirkpatrick stroked a single to left field, but only one run scored. After a strikeout and it appeared that Walton and Rowan may get out of the jam, two more hits brought in three more runs for a 5-0 Texas lead.

Rowan, which had left two runners on in both the first and third innings, struggled after falling behind to mount much of a comeback.

And Walton bounced back, not allowing any more runs and just one more hit. She threw 102 pitches and struck out six batters. Walton did have two walks, unusual for her.

Litterio, who had been as good as Walton throughout the World Series, battled and spaced out Rowan’s eight hits. She struck out just four batters, although she averages near double-figures. But Litterio got big outs at key moments.

Rowan leadoff hitter Allison Ennis led off the game with a solid single and moved up one out later on single from Walton. But Ellen Yang lined out to shortstop and Tate Barger smoked a hard shot right at the shortstop who made the clean throw to first to end the inning.

“A foot either way there, and we score a couple of runs,” said Yang of Rowan’s first inning. “But that’s the way it goes.”

Rowan also had two on and two out in the top of the third inning but Litterio snagged Yang’s come-backer in the circle for force-out at third base.

Rowan made it 5-1 in the top of the fifth inning but again, couldn’t get the big hit that could have swung the game in its favor.

Megyn Spicer led off the inning by getting hit by a pitch. Ennis singled and then Hales singled in Spicer and the runners moved up on a bad throw. Walton followed with an infield hit to load the bases and still not outs.

But Texas shortstop Munoz speared a sinking liner off of Ellen Yang’s bat and stepped on second base for a double play. Barger then struck out to end the threat.

Rowan got sixth-inning singles from Brooke Kennerly and Caylie Keller but Litterio induced a pop foul fly from Ennis that ended the game and season.

“We had a lot of opportunities and kept fighting all the way to the end, but that doesn’t surprise me about this team,” said Yang. “What did surprise me was that a lot of the girls seem to feel a lot of pressure to win it, back-to-back, and nerves did get to a few of them.

“I’ve lost a lot of games, but seeing their sad faces breaks my heart,” continued Yang. “But they are young and resilient and they’ll be fine. On paper, these two teams were pretty even, but Texas got the big hits and we didn’t.”