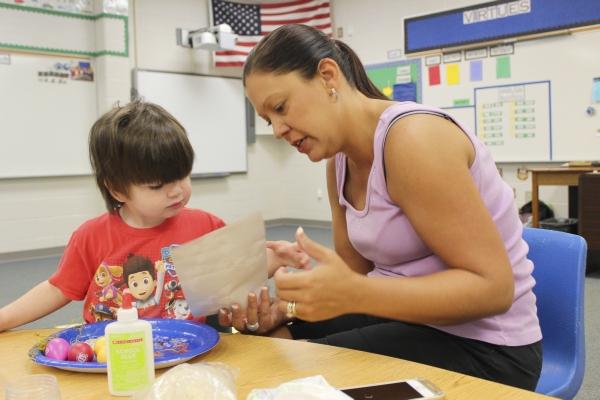 Footprints in the Community’s summer camp programs – like this music therapy camp held in early August – were on the verge of being cut or cancelled before funds from Salisbury Academy’s Bloom Enchanted proceeds revived the programs. “We are so grateful for our relationship with Salisbury Academy and the support they have shown us,” said Dr. Ashley Deaton, pictured right, Footprints in the Community founder. Submitted photo

SALISBURY — One evening of fundraising and compassion can go a very long way.

At a time when Footprints in the Community  — an organization which promotes community inclusion for children with special needs – was ready to reduce their summer camp programming due to funding issues, a portion of the money raised at Salisbury Academy’s Bloom Enchanted gala brought the programs back to life.

“Every year we fund a different community need through the academy’s Bloom gala proceeds,” said Salisbury Academy Head of School Beverly Fowler. “It was an honor to play a role in helping these vital summer programs thrive.”

Footprints in the Community held two summer camps with assistance from the Bloom funds, the first being a month-long, literacy-based camp for children ages 2 to 10. Campers received books and supplemental materials on camp themes and went on field trip adventures to locations including Dan Nicholas Park and the Rowan County Airport.

“Without Salisbury Academy’s support, we would not have been able to enrich our learning experience with field trips and hands-on opportunities to learn more about our camp themes,” said Dr. Ashley Deaton, Footprints in the Community founder.

The second camp, held at Salisbury Academy, offered speech and music therapy to the Footprints in the Community’s youngest participants who are not yet speaking.

“At the camp, we use the power of music to encourage more sounds and vocalizations,” said Deaton.

Therapists at the music camp worked with children in small groups to provide one-on-one attention. Campers received themed books with accompanying manipulatives designed to empower them to act out the storyline and thus develop literacy and speech.

In addition to the measurable progress in literacy and speech that children bring home from the summer camps, Deaton said that the camps’ take-home books in themselves hold great value to participating families. In many cases, Deaton explains, the only books that participating families have in their homes are those they have been given through Footprints in the Community programs.

“These camps were in danger of being significantly limited or cancelled for this summer until Salisbury Academy so graciously blessed us with the Bloom gift,” said Deaton.

“Because of Salisbury Academy, over 30 local children had a rewarding and fun learning experience at this year’s Footprints Summer Therapy Camps.”