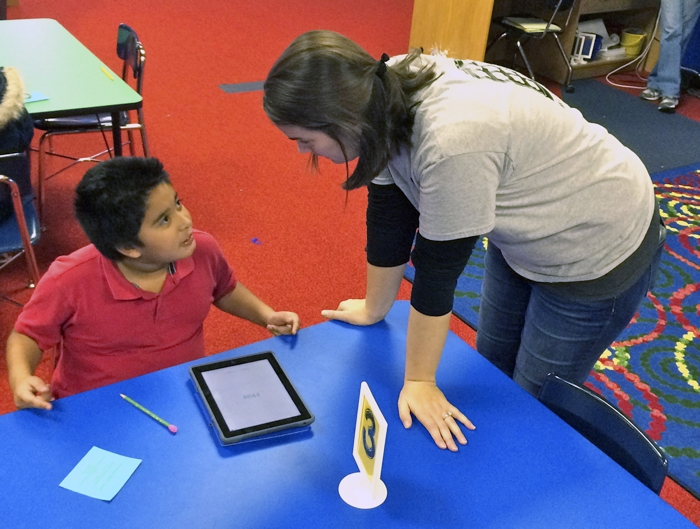 David Hernandez Mejia recieves instruction from Ann Gregson about how to set up his iPad. Communities in Schools will help some students get internet access at home with wifi hotspots.

The digital playing field will become more level this fall for some of the students who participate in Communities in Schools of Rowan County. The program will provide wireless “MiFi” wireless hotspots so students who have no internet access at home can get online.

If this bold step proves to be productive, education advocates should look at ways to expand use of the devices to more students. The lack of internet access in lower-income homes has been a barrier to full use of digital devices provided by the Rowan-Salisbury Schools.

Scott Bannister, executive director of Communities in Schools here, announced the new initiative at a breakfast meeting with CIS staff and supporters on Tuesday. He said the devices will go to CIS students who are identified as most in need of help. The agency is using a grant to buy the handy hotspots — each one is about the size of a smart phone — and the students will not be charged for broadband use.

Communities in Schools, a United Way agency, is accustomed to filling gaps. A dropout prevention program, Communities in Schools trains and assigns volunteers to help struggling students; in Rowan, they go to five elementary and two middle schools. As tutors and mentors, the volunteers give students the individual attention that teachers cannot provide for everyone. In many cases, the volunteers also become role models and encouragers, helping students realize that education is important. Someone cares.

Of the students touched by Communities in Schools in the 2015-16 school year, 100 percent stayed in school, 92 percent were promoted to the next grade, 84 percent improved academically, 80 percent improved behavior, 63 percent improved social and emotional learning and 58 percent met attendance goals.

Having an iPad or laptop with access to the internet is not going to overcome all the challenges those students face. Without home internet access, though, they are at an automatic disadvantage.

There are lots of questions about how these hotspots will work. Bannister said they include controls that limited which devices they can be used on. The internet has as many pitfalls as positives; how that will be controlled or directed is another question. But these devices are a considerable step up from students having to find WiFi. The school system has worked with local companies and agencies to identify hotspots across the county where students can get online, but getting to them is not always easy for students whose parents are working  or don’t have a car.

Kudos to Communities in Schools for helping students connect to the internet — and a better future.