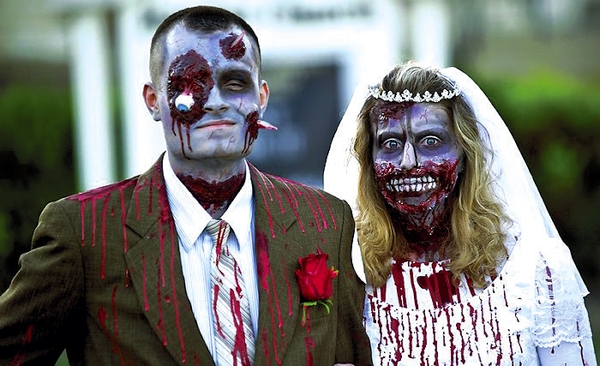 KANNAPOLIS — Carla Pressley has always loved working on cars, but when she turned 40 she wanted something a bit different than your typical “Mom” car. That’s when she discovered “Beast,” a 1995 Federal Heritage Cadillac hearse.

“I saw her and I had to have her,” Pressley said. “She screamed, ‘Take me home!’ Professional cars just have a unique attitude of their own.”

Pressley, of Kannapolis, said she bought the hearse from a funeral home in Concord and now participates in the Reaper’s Rides hearse car club, which has members in N.C., S.C., Tenn., Va. and Fla.

The Reaper’s Rides will be participating in the inaugural Kannapolis Arts Zombie Walk and Arts Festival, a zombie walk-focused version of the group’s Kaleidoscope Cultural Arts Festival series in downtown Kannapolis.

The inaugural Kannapolis Arts Zombie Walk and Arts Festival runs from 4-8 p.m. Saturday, Aug. 20 on West Avenue. It is free to attend the festival but costs $5 to participate in the actual zombie walk at 7:30 p.m. at Village Furniture, with proceeds benefitting Cabarrus Literacy Council and Kannapolis Arts events. There will also be makeup artists on hand to help “zombify” participants.

The festival will run in conjunction with the second annual Kannapolis Wine Festival (see story at left). A trolley will be able to transport patrons between the wine festival and the zombie walk festival.

Pressley will not only be participating as a member of Reaper’s Rides, but is also spearheading the Kannapolis Arts Zombie Walk and Arts Festival. Originally, another volunteer planned to organize the event, but after Kannapolis Arts announced the date for the zombie walk the volunteer was unable to continue planning the event.

That’s when Pressley stepped in and took over.

“Starting from scratch has been the biggest challenge,” Pressley said. “I wasn’t really expecting to coordinate the zombie walk myself, but the way things worked out, it has become my baby.”

Fortunately, Pressley has already had plenty of experience attending more than a dozen zombie-themed events, from band events, to bar crawls to “brain” eating contests (no brains here, just Jell-O), dances and other events.

Now, Pressley is spearheading her own zombie walk, which will feature Stray Cat Sideshow doing sideshow tricks and fire spinning as well as the dance troupe, Spotlight Dance Company, dancing to Michael Jackson’s “Thriller” as well as characters and participants from the local “haunts” including Reaper’s Realm, Maze of Terror, Forbidden Forest and Boogerwoods.

The event will also include food trucks and a kid zone with Reaper’s Realm providing a “lazer tag” area. Plus, the Southern Belle Ghostbusters are scheduled to attend.

To sign up or find more information, visit www.KannapolisArts.com

KANNAPOLIS — It may be the second annual Kannapolis Wine Festival, but this year’s event will also feature two breweries with seven wineries.

The inaugural festival was held last year at the old Cabarrus Bank Building, but is moving to a larger facility. The second Kannapolis Wine Festival runs from 2-6 p.m. Saturday, Aug. 20 at Kannapolis City Hall, 401 Laureate Way.

This year’s lineup of wineries and breweries includes:

The wine festival will run in conjunction with the inaugural Kannapolis Arts Zombie Walk and Festival which runs from 4-8 p.m. Saturday on West Avenue. A trolley will take patrons between the two events. Darcey Quates Wilson and Shane Manier will be painting during the Kannapolis Wine Festival.

Tickets are $25 for the wine festival and patrons receive a wine glass with unlimited samplings. The event is limited to 600 people.

The event has grown since last year, with Downtown Kannapolis Inc. selling out the event with more than 300 people attending at the old Cabarrus Bank Building. Now, the wine festival is moving from a 3,800 square foot space to a 5,300 square foot space.

Dawn Evans, one of the organizers of the Kannapolis Wine Festival, said they expect to see the festival grow over the years, based on the inaugural festival last year.

Evans said they have already sold more than 100 tickets to this year’s festival. Evans said the festival draws patrons from across the state because of its focus on local wineries.

Evans said the festival allows patrons a chance to sample wines they may not be sure if they want to purchase or not.

“They can go and buy all different kinds of wines at Walmart or the grocery store, but they can’t sample them,” Evans said. “I think people want to get out and explore what’s in their backyard.”

Visit http://downtownkannapolis.org/to or visit https://www.ticketriver.com/event/20616 to purchase tickets. Tickets can also be purchased at Omega Graphics, 293 Brookdale St.; the North Carolina Music Hall of Fame, 600 Dale Earnhardt Blvd.; or on the third floor of Kannapolis City Hall in the parks and recreation department at 401 Laureate Way.