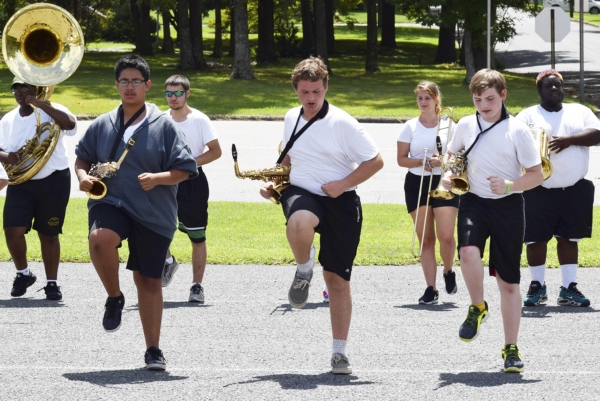 SPENCER — Nearly 40 students rank themselves in perfect lines in the North Rowan High School parking lot. When they get the signal they start to move, to wheel and turn with high steps. This year, the marching band is thriving, but it wasn’t always that way — students who were members of the band last year said they used to fear the program would be shut down.

At the beginning of the 2015-16 school year, the marching band was struggling and had few students, and when the school suddenly lost a band director, band parents and students worried that it was the end of a program that once boasted more than 300 young musicians.

“Back then, it felt like the arts were dying a little bit,” James Woodson, volunteer coach of the band’s dance and majorette team, said.

At the beginning of the 2015 school year, Sir Davis came on board as the school’s band director, and parents and students alike credit him — and the tenacity of the students — with pulling the band through.

Davis previously served as the band director at Salisbury High School in 2012 before leaving suddenly in 2013.

Under his direction last year, North Rowan’s tiny marching band claimed more than 30 competition trophies, and even qualified for a national competition — though they weren’t able to attend.

“We shocked everyone,” Joshua Phillips, a rising senior at North Rowan, said. Phillips, along with four other members, last year qualified for and attended an intensive training camp at Southeastern Louisiana University.

Phillips has been marching since he was in sixth grade, and said that he watched the band shrink over the years — but Davis helped fashion them into something that shone. When the small marching band went on the field at competitions last year, Phillips said, people were skeptical.

“A lot of people look at a marching band that big and are like, ‘What are you gunna do?’” He said.

But then the band began to play. One of the things Davis and his band pride themselves on is their sound. The group may be small, but as they play original arrangements by Davis they can fill a stadium with music with the best of them.

Sophomore Kelly Frye is a new transfer from Carson, and she said when it comes to sound — to power and emotion — North Rowan’s band can keep up even with the larger Carson marching band.

Davis said the band is “the life of the school.” But a small size isn’t the group’s only struggle. Davis cited band fees — which at North Rowan are approximately $200 for new students — and old, worn-out instruments as other roadblocks.

“It kinda gets discouraging,” he said.

But the band has the support of parents and alumni. Band booster member Linda Hensley said North Rowan’s fees are lower than many others in the county because the boosters try to absorb as much of the cost as they can. Money earned through concession sales is used to offset costs, purchase new instruments and shuttle the band to and from competitions. For band parents, this year is the start of the upswing.

“It’s struggled, but the kids are strong,” Rhonda Smith said.

The marching band is co-coached by previous alumni, who come back year after year.

James and John Woodson graduated from North Rowan in 2012, but still come out each summer and during band season to train the dance and majorette team, which they founded. The brothers said that while they love the dance team, their real goal is to inspire kids and keep them off the streets. James said they tell students to keep up their grades in addition to working hard in band.

“Which is one of our biggest hopes and dreams for them,” John said.

And through grueling practices, jubilant wins and weeks of hard work, the band becomes something else.

“They grow to love it, we grow to become a true family,” James said.

“They’re more of a family here,” Frye said, when asked about differences between Carson and North. “They help each other out.”

Now that the band has “bounced back,” which Frye and Phillips credit to Davis’s ability to make the program fun and easy to learn, students, parents and teachers are ready to blow the competition out of the water.

“I think we’re gunna do more damage than we did last year,” Phillips said.

But for Davis, recalling his first impression of the band room with its old photos, trophies and awards, the potential was always there.

“The legacy continues,” he said.