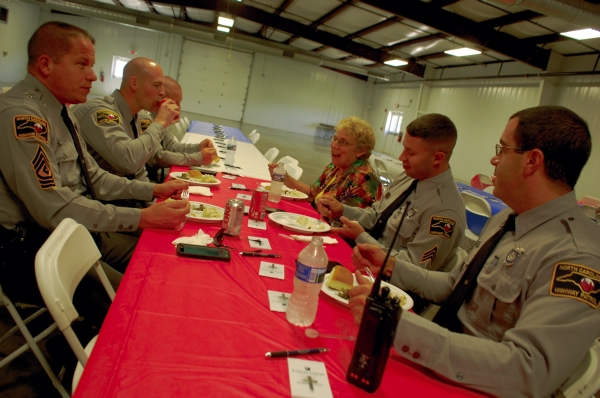 Mark Wineka/Salisbury Post State highway patrolmen from Rowan County enjoy the Law Enforcement Appreciation Lunch Thursday at the fairgrounds. On the left side are Stephen Pace, Travis Sloop and Jaret Doty. On the right are Eric Perdue, Daniel Hall and Penny Godbey.

SALISBURY — A steady stream of law enforcement officers and their staffs, courthouse and emergency communications personnel kept coming to the Rowan County Fairgrounds Thursday for a “Law Enforcement Appreciation Lunch.”

The free lunch included hamburger steak and gravy, mashed potatoes, green beans, rolls and Hershey’s ice cream, and it was open to all law enforcement-connected agencies throughout Rowan County.

The event’s main sponsor was Powles Staton Funeral Home, and the chief cook was Register of Deeds John Brindle, who also is a deputy. They prepared to serve 400 between 11 a.m.-2 p.m.

“If one police officer came, it was worth it,” said Will Staton of Powles Staton Funeral Home. “The police officers need all the support they can get.”

Powles Staton’s Russ Roakes, who served as a lead organizer for the event, said other sponsors, including Brindle, the Fair Association, Dr. Melanie Denton of S.E.E. (Salisbury Eyecare & Eyewear) and Bradshaw Financial Planning, immediately offered to help when he contacted them with the idea for an appreciation lunch.

Within two days, “We were ready to roll,” Roakes said.

“From what happened in the first 30 minutes,” Roakes added of the nice turnout, “it will be annual.”

David Toeppe of Bradshaw Financial Planning worked on the serving line and also helped with the food preparation.

“We just wanted to show our appreciation to the police and law enforcement for everything they do,” Toeppe said.

Jonathan Brindle Jr. and Shane Aldridge were helping Brindle in the hot, outside job of cooking the hamburgers. It was the largest crowd he had ever cooked for, Brindle said.

“They (law enforcement officers) are good people, and they have a servants’ heart,” Brindle said.

Others helping prepare the food in the kitchen were Chris Cranford, Marlene Mills and Alan Mills.

For the lunch, five long tables were set up inside the new, air-conditioned Hubert and Blanche Ritchie Foundation exhibit hall/events center at the fairgrounds, so things were comfortable. Many of the officers dined with their portable radios on the table beside them, in case they had to leave in a hurry on a call.

“It’s pretty awesome,” Detective Todd Sides of the Salisbury Police Department said. “It’s nice to be able to come to a safe environment and eat and know people still care.”

Detective R.W. Meismer of the Rowan County Sheriff’s Office added, “This is great, what they’re doing for the officers.”

Roakes noted the summer has had its share of negative publicity for law enforcement in other parts of the country.

“We just thought it was time to do something positive for these guys,” he said.