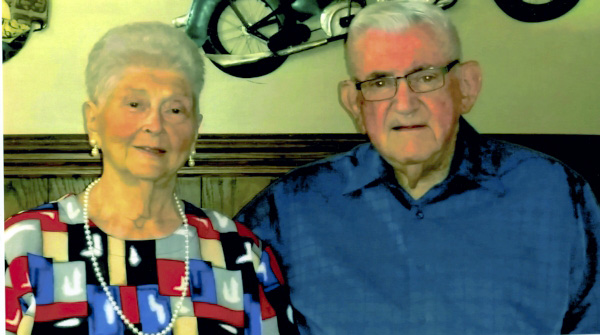 Submitted photo This photo of Margaret and Don Livengood was taken in June on Margaret's 80th birthday, which was also the couple's 59th wedding anniversary.

Holding hands: Don and Margaret Livengood die as they lived — together In their last days together in the hospital, Don and Margaret Livengood tried to hold hands as much as possible. Submitted photo

SALISBURY — Last Friday, no doubt against hospital protocol, somebody pulled some strings and allowed Don and Margaret Livengood to share a room together in Intensive Care.

Both were suffering. With his pulmonary fibrosis and bilateral pneumonia, Don could hardly breathe and was receiving 70 liters of oxygen. The cancer Margaret had been diagnosed with in May, along with several other serious health issues, were making things difficult for her.

The hospital staff positioned the couple’s beds so they were facing each other. They were close enough that Don, 84, and Margaret, 80, could slide the fingers of their nearest hands together, even with all the tubes and tape.

They held hands almost continuously over the next few days, literally holding on for each other.

Margaret died at 7:58 a.m. Monday. That same afternoon, after saying the air would be better in heaven, Don died at 5:19 p.m.

You have to know Don and Margaret Livengood to understand why the news of their deaths, hours apart on Monday, led to such emotion at Carolinas Healthcare NorthEast. For 59 years of marriage, they lived their own love story, one steeped in faith.

On Sunday, talking with daughter Pattie Livengood Beaver and knowing the end was near for both of them, the ever spiritual Don Livengood referenced “the Pearly Gates.”

“We could walk in together, just like we’re getting married again,” Don said.

Later Monday night, after losing both of her parents on the same day, Pattie returned to their longtime home on Stokes Ferry Road and started paging through the “Personal Record Book” she had been keeping with the help of her mother and father over the past year.

It was full of items Pattie and her brothers, David and Wayne, will cherish for the rest of their lives. Pattie thought she knew the contents of the book front to back, until she noticed something new her father had written in a steady cursive on a separate page.

“To my family, I love you all!! Please don’t mourn for me at my death. Have a service of praise and thanks. My faith and trust is in Jesus Christ, not only in my earthly life but throughout eternity. Love, Daddy. My greatest desire is that all of you believe in Jesus Christ as God’s Son and receive Jesus’ gift of forgiveness from sin (John 3:16).”

Pattie says the first, middle and last things you have to talk about with her parents was their faith. “Anybody who knows them, that’s what they were about,” she says. And Don especially was so darn friendly about it.

Brandon Livengood, one of the couple’s grandchildren, says when Don went out to eat, the first three things he would ask his waitress was “What’s your name,” “Where are you from” and “Where do you go to church.”

David Livengood said it wasn’t just the waitress. His dad would work the entire room.

“You would think he was running for governor,” David says.

Years ago, because he had worked 40 years at the Stanback Co., makers of both headache powder and Chap-et, Don was known as “Mr. Chap-et.” He seemed to give out the lip balm to everyone with whom he spoke.

Don had perfect attendance at Civitan Club meetings since joining in 1957. He would even cut short family vacations, so he could get back for a meeting. And though he didn’t play an instrument, Don loved bluegrass music and through the years became the chief promoter of the Fiddlers Convention.

The entire bluegrass community came to know him.

“He was my buddy, I’ll tell you,” said Vivian Hopkins, who worked closely with Don on the Fiddlers Convention over the past six years.

Don had Pattie to call Hopkins so she could come to his hospital room Sunday night to go over some things about the upcoming 50th convention, which against his wishes, was going to honor him.

At Don’s request, Vivian and some of her bluegrass friends — Montgomery & Co. — are going to play at the joint funeral of Don and Margaret. They will play the “Far Side Banks of Jordan.”

“That’s them as a couple, and that’s them talking to y’all,” Vivian told family members piled into the Livengoods’ living room Tuesday night.

Pattie, David and Wayne say their mother was the peacemaker in the family, the glue, the backbone. They never saw her become angry, never heard her say a cross word and was a sweet, kind, gentle soul.

“All the things I’m not, she was,” Pattie says.

For 20 years, before she retired, Margaret was the secretary for the Rowan Baptist Association. The Rev. Bill Hallman said every Baptist minister in the county knew Margaret, and she did a lot of counseling of ministers and assisting of churches from her office.

“If you needed something, Margaret could get it for you,” Hallman says.

She also wrote and mailed out the association’s newsletter, something granddaughter Beth Bost used to love to help with.

Bost and grandson Brandon Livengood said they couldn’t have had better role models than Don and Margaret.

Don was a 1950 graduate of China Grove High School. Margaret graduated from Granite Quarry High in 1954, then went on to business school. The couple met at Stanback Co. after Don had served a stint in the Navy.

“According to Daddy, he saw this pretty new little secretary, and he told the other guys, ‘I’m going to date her,'” Pattie says.

Dating proved tougher than Don expected, thanks to Margaret’s aunt, Minnie Stiller, who raised her. Their first dates had to occur in church, and if Don was even going to think about marrying Margaret, Minnie said he would have to join the church first.

They always called each other “Darling.” As Margaret was in and out of consciousness toward the end, she once opened her eyes and said, “Darling, come on, let’s go.”

“They were never, ever separated in life,” Pattie said, and that was true in their final days.

Over the past year, Pattie and her husband, Walter, had moved in with her parents to take care of them. Don and Margaret were in and out of the hospital a lot. Whenever one of them was in the medical center and the other was not, it devastated the spouse left at home.

Once when Don was hospitalized, Margaret would sit with him each day from 4 a.m. to 8 or 9 in the evening.

On a Monday, Aug. 8, Pattie drove them to the hospital, and they were admitted together, not knowing they would not be returning home. Over the past year and even in their final week, the couple made so many friends that the medical center staff would come from several different floors just to see them.

The couple’s treasured cat, Morris — they called him their “grandcat” — was able to visit them. On Saturday evening, nearly 20 friends and family gathered around their beds and sang gospel hymns and prayed.

At that time, Don also spoke more than an hour straight of the couple’s lives together without struggling to breathe. The family thinks Don and Margaret also held out and held on to each other until grandson Brandon, a Navy man stationed in Italy with his wife, Jerrica, and their two children, could make it back home to see them.

When Brandon’s family was desperately trying to make plane connections from Detroit to Charlotte, a new line opened up for them in the passport lanes, then they were allowed to go through security with the pilots.

“By the grace of God, we made it with 5 minutes to spare,” Brandon says.

He arrived at the hospital about 12 hours before Margaret died.

“God’s hand was in everything,” David Livengood says.

Bill Hallman says the Marcel Proust quote on the door of Room 3309 in Intensive Care — the room of Don and Margaret — was perfect. It said:

“Let us be grateful to people who make us happy, they are the charming gardeners who make our souls blossom.”

Don and Margaret are in heaven now,  gardening together and holding hands.

Divide and conquer: The Waltons had children playing in championships on opposite sides of the country

By Mark Wineka mark.wineka@salisburypost.com SALISBURY — Alan Walton was a nervous wreck Tuesday. “It is what it is,” Walton said he told people... read more