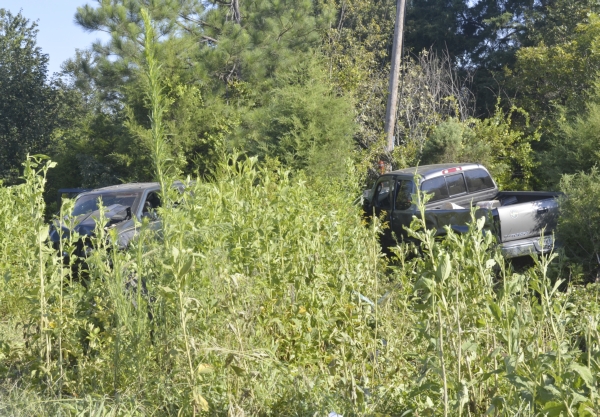 These two vehicles collided at the intersection of Patterson and Brown roads in China Grove after a woman failed to stop for a stop sign. The vehicles landed in patch of overgrown brush on the side of the road. Five people were taken to the hospital including three children and two adult drivers. One child was partially ejected and was found hanging out of a window. Shavonne Walker/Salisbury Post

CHINA GROVE — Five people were injured Wednesday morning in a two-vehicle collision at the intersection of Brown and Patterson roads. A Kannapolis mother faces charges because she failed to stop for a stop sign and her daughter was not wearing a seat belt.

The crash occurred just before 9 a.m. at the intersection, sending both vehicles off the road and into overgrown brush.

Jenkins’ sport utility vehicle collided with a Toyota Tundra driven by China Grove resident Ryan Cress, 36, who was traveling on Brown Road. Both vehicles came to rest off the roadway, taking with them the stop sign and street sign.

Cress was the only occupant in his pickup. He was taken to Carolinas HealthCare NorthEast in Concord. He’d been seen conscious and alert at the scene, but Perdue said as time went on, Cress began to complain of some pain.

Perdue said Jenkins’ three daughters, 15, 11 and a 7, were injured. The 15-year-old was partially ejected from the vehicle and was found hanging out of a window by rescuers. She was not wearing a seat belt.

The oldest daughter was airlifted to Carolinas Medical Center in Charlotte. The other children and mother were taken via ambulance to Carolinas HealthCare NorthEast.

Jenkins was charged with failure to stop for a stop sign and failure to have her child properly restrained.