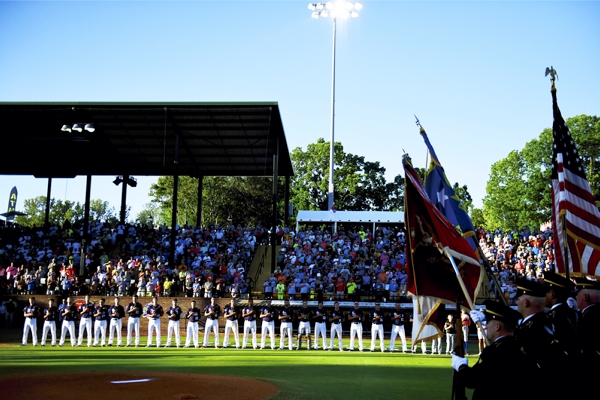 SHELBY — The only happy person in Rowan County on Wednesday morning may have been Blakely Kiah Gantt, the 4-year-old daughter of Rowan County American Legion coach Jim Gantt.
She finally got her dad back after an extended absence.
“I was away 21 of the last 27 days,” said the coach who guided Rowan through wins in the state tournament at Wingate, the regional tournament in Asheboro and finally to a runner-up finish in the World Series in Shelby. “My daughter doesn’t know enough yet to figure out who won a ballgame that she’s watching, but she does know that if we won then I’m not coming home. When I talk to her on the phone, her first question is always, ‘Did you win or lose?'”
Players also put in overtime, all summer long, and not just in that grueling, 12-inning finale, an 8-6 loss to Texarkana, Ark.
“We gave up our whole summer, but I don’t feel bad about that at all,” said Rowan left fielder Jake Pritchard who will be reporting to Lenoir-Rhyne on Friday. “We were a really good team. If we hadn’t been, we would never have gotten here.”
Rowan’s 41-13 record meant that the 2016 team joined some powerhouse predecessors — 1996, 1998 and 2002 — as 40-game winners.
In terms of pure talent, this team wasn’t like those teams. In terms of sheer talent, this team wasn’t as loaded as Rowan’s 2015 state champions. John Owen, the No. 1 pitcher for the 2016 team, was a relief hurler on the 2015 squad. Lee Poteat, the cleanup man for the 2016 team, was the fourth outfielder on the 2015 team.
And yet this team came awfully close to winning the national championship. Rowan showed that just about anything is possible with old-fashioned stuff like teamwork and chemistry.
“As far as their effort, as far as pulling for each other and everybody being in it together, I couldn’t have asked for any more than they gave us,” said Gantt, who was assisted by Seth Graham, Luke Setzer and Russ Weiker. “These guys were fun to coach and they did phenomenal things. We had one hell of a year.”
It didn’t look promising early. Rowan lost a 12-10 game to Randolph County in the home opener at Newman Park that was almost unwatchable. Rowan was 0-2 at Newman Park after dropping a 10-9 game to High Point in its next outing. Rowan led three times in that one and couldn’t close the deal.
Rowan was staggering along at 10-7 in mid-June after losing twice to South Carolina teams. The season-turning game was a shutout pitched by Joe Harrison against Lancaster, S.C.
Harrison wasn’t on the final 18-man roster, but he was part of what happened, and even after being cut, he still came to every game to support his teammates.
Rowan was good by the end of the season, as the coaching staff blended players from West Rowan, East Rowan and North Rowan with four homeschoolers. Rowan was runner-up in Area III to High Point, but then it got on a roll behind exceptional starting pitching.
The last piece of the puzzle was installing Pritchard, who had been rotating at catcher with Trevor Atwood, in left field. That got the bats of both Atwood and Pritchard in the lineup every night. Pritchard batted .400 in the regional, driving in eight runs, and then he made two tremendous defensive plays in the World Series.
Rowan’s only power pitcher was Hunter Shepherd, who throws his fastball in the 85-86 mph range, but Rowan’s other starters fired strikes and the infielders generally made the plays behind them.
Bryan Ketchie went 10-3 and became the program’s first 10-game winner since 2009.
“We proved a lot of people wrong this year,” said strong-armed third baseman Juan Garcia, one of the big RBI guys for Rowan’s last two teams. “Tough loss in the championship game, but we’ll move on. And Rowan will still be good again next year. I’m looking forward to watching them.”
Shepherd entered the program record book when he boomed his 29th double in the first inning of the championship game. That broke the season mark that Trey Holmes had set for the 2009 Rowan team that won 39 games and played in the World Series in Fargo, N.D.
Shepherd’s 70 RBIs tied him for third with Michael Lowman (1998) on the all-time list for a season. Holmes had 73 in 2009, while Coe Brier had 81 in 1980.
Poteat, the right fielder, also made a dent in Rowan’s record book. His .426 batting average ranks 12th all-time. His 86 hits are tied for fifth. His 36 steals are sixth.
Poteat is headed to St. Andrews. The good news is he’ll still be eligible for Legion ball in 2017, and with the confidence he has now, he’ll be tough to handle.
“I just hate we didn’t win it,” Poteat said. “You never realize how much mistakes you make early in the game are going to cost you. There were a few plays where we just didn’t execute.”
Coming out of nowhere for Rowan this summer was center fielder and leadoff man Chandler Blackwelder, who batted .368. His 90 hits rank second all-time. Holmes had 96 hits in 2009.
Blackwelder trudged off the field at Shelby after a long awards ceremony, with head up and eyes clear. The runner-up medal draped around his neck brought more pain than pride in the short term, but 10 years from now he’ll appreciate the amazing season he and his teammates turned in.
“This didn’t end the way we wanted it to, but as young men, it was a great opportunity for all of us to play in the World Series championship game,” Blackwelder said. “It’s something we’ll never forget.”
Rowan was well-represented on the World Series all-tournament team that was done by position.
Honorees were Garcia, Poteat, Shepherd, second baseman Tanner File and pitcher Sawyer Strickland.