Rowan girls are a win away from repeating as world champs 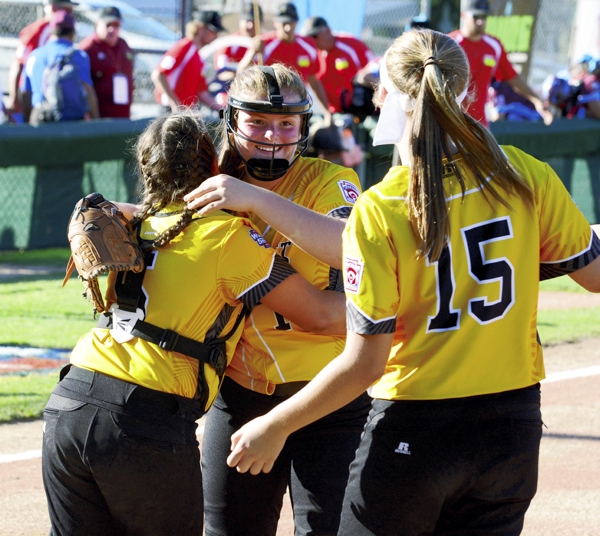 Not many kids get to live out the dream of winning a world championship.

A special group of girls from Rowan County are one win away from realizing that dream two years in a row.

Rowan, the Southeast Region champ, won the crown last August, defeating a team from Rhode Island for the title. The opponent tonight will be another team with a perfect 6-0 record during the World Series, the Southwest Region champion from Helotes, Texas. The game will be televised live at 9:00 (Eastern time) on ESPN2.

“The two best teams are definitely in the final, so we’ll see what happens,” said Rowan coach Steve Yang. “Neither team has been behind in any game in the tournament, so the key will be to get ahead and put some pressure on them early, before they try to do the same to us.”

Texas defeated Michigan, 6-0, in the other semifinal, behind pitcher Annika Litterio’s 12 strikeouts.

It was Walton who continued to shine for Yang’s team, pitching a two-hit shutout against a Robbinsville program that won the World Series in 2014. It is different girls now, but still a strong team that went 4-2 for the week.

In fact, after Monday’s quarterfinal win over the Netherlands, Yang called Robbinsville a “storied program … a very complete team.”

However, against Walton, Rowan’s hard-throwing lefty, Robbinsville was overmatched in front of a national TV audience. Walton struck out 11 and walked only one batter, firing 91 pitches over six innings.

“Taylor, the last two games, she has been pretty dominant,” said Coach Yang. “Being a lefty, with that tailing pitch, she’s tough to hit. She’s definitely proven that she’s a a big-game pitcher. And, she’s carried us at the plate and has been our most consistent hitter this week.”

Robbinsville got two runners on base just once, in the third inning. After two out, Jillian Hutt and Kenzie Martin had back-to-back singles. But Walton then got Ella Iorio to ground out to Hales at first base, ending the threat.

In the fourth inning, Walton issued her only walk of the game to leadoff batter Brynn Hopkins. Walton then struck out two straight batters before retiring Gwen Wells on a popout to shortstop Ennis.

Walton pitched around an error in the sixth and final inning, striking out Alexa Klepper looking to end it.

And if pitching wasn’t enough, Walton led Rowan at the plate, going 3-for-3 for the second straight game.

Rowan added to Walton’s confidence by staking her to a quick, 2-0 lead in the first inning before Robbinsville even came to bat.

Ennis, as she does often, led off the game with a single. Hales’ groundout moved Ennis along and Walton doubled to score her, making it 1-0. Pinch-runner Kenadi Sproul scored the second run on a throwing error.

“We came out on fire and that was a pleasant surprise,” added Yang. “That set the tone for the rest of the game.”

Rowan added an insurance run off of Hopkins, Robbinsville’s starting pitcher. Ennis led off and reached on an error, moved around on another hit from Walton and scored on a groundout from Yang.

So did Coach Yang, in his wildest dreams, think his team could get back to the championship game?

“You know, you talk about your history and it takes both skill and luck to be successful,” said Yang. “We had both of that last year and some to this point this year. We got stronger as the season went on and starting building more and more confidence through the state and regional tournaments.

“But realistically, the chances of doing what these girls have done are very slim,” he continued. “So, give them all the credit for being in this position again.”

NOTES: The Rowan County government is hosting a viewing party tonight at 8:00, at West End Plaza, in the old J.C. Penney space. Fans are urged to bring drinks and snacks and their own chair. No glass bottles and alcohol of any kind will be allowed.

Divide and conquer: The Waltons have children in championships…