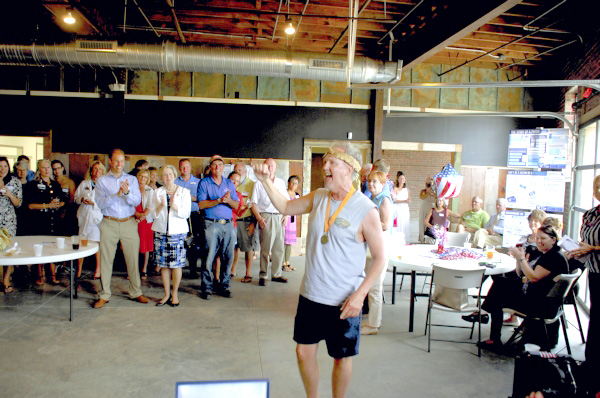 SALISBURY — It’s difficult to say who was the star of the Rowan County Chamber of Commerce’s Business After Hours gathering Monday evening — an enthusiastic Tim Norris or the beers and food served up at the new Morgan Ridge Railway Brewery & Eatery.

Playing on the night’s Olympics theme, Norris rallied Chamber members in a kickoff to the organization’s Total Resource Campaign, whose goal this year is to add 90 new Chamber members, retain 90 percent of the first-year renewals and raise $5,000 in donations.

The campaign is a short one, ending Sept. 16. Team captains were in Olympics-styled costumes with Olympics-inspired team names, such  as Navigator, Apollo, Team USA Eagles, Togas, Medals and Team Rio.

At the Chamber’s board meeting Sept. 19, prizes will be handed out to the top individual producers and teams, including a $2,500 vacation package.

The campaign will be advertised in the Post, on radio spots and over social media.

“Who in the world would not want to be members of one the greatest chambers in the country?” Norris asked. The Chamber currently has 825 members.

The night also included an Olympics trivia quiz, in which prizes were awarded to those with all the right answers, and a cornhole competition, in which gold, silver and bronze medals went to those with the best two-out-of-three tosses.

The event was held at the new brew pub, which will be fronting the Railwalk at 421 N. Lee St. The restaurant is still in the renovation/construction phase, and owners Amie and Tommy Baudoin invited everyone to a grand opening planned for Oct. 8, the same weekend as OctoberTour.

“We’re going to break it in right,” Norris said after he got things rolling by shouting “U-S-A! U-S-A! U-S-A!”

Norris, vice president of Healthcare Management Consultants, is the chairman-elect of the Rowan County Chamber board. Outgoing Chairman Ted Goins, who was carrying syringes and described himself as being dressed as the team doctor for Russian Olympians, said one thing Rowan County doesn’t need lately is performance enhancers.

Goins said there were a lot of great things happening, such as the Morgan Ridge brewery and restaurant, the possible redevelopment of the Empire Hotel and the Chamber itself, which received word Monday it was a 2016 finalist for the Association of Chamber of Commerce Executives award.

Yesterday: The day after Elvis died