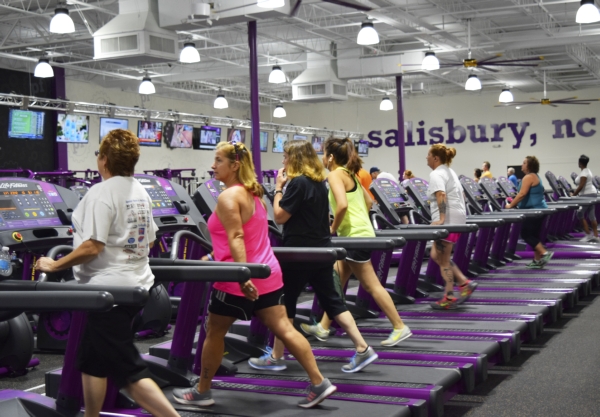 Walkers in August 2016 use treadmills at Planet Fitness.

By 5 p.m., there was a long line in front of the new gym as people waited for a chance to meet NASCAR driver Joey Logano, who made a guest appearance at the grand opening.

The gym opened registration more than a month ago, and by Monday evening already had a decent crowd of new members eager to try the bright purple equipment.

The chain prides itself on providing a “judgement free zone” for people wanting to work towards a healthier, more active lifestyle. Traditional gyms can be very intimidating for the nearly 85 percent of the population which doesn’t work out regularly, Rayna said.

That slogan is one of the things that attracted Carol Carpenter to the gym.

Carpenter said she normally works out at Rufty-Holmes Senior Center, but wanted the self-improvement and build up to a regular routine offered by Planet Fitness.

Carpenter was joined Monday by her friend Sharon Skeen, who also decided to give Planet Fitness a whirl.

“I thought I’d give it a try as something fun,” she said.

Reyna estimated that the gym hired roughly 18 new employees, and said that, for now, staff requirements have been met.