The Dart: Back to Bethel: Camp meeting opens for 64th year 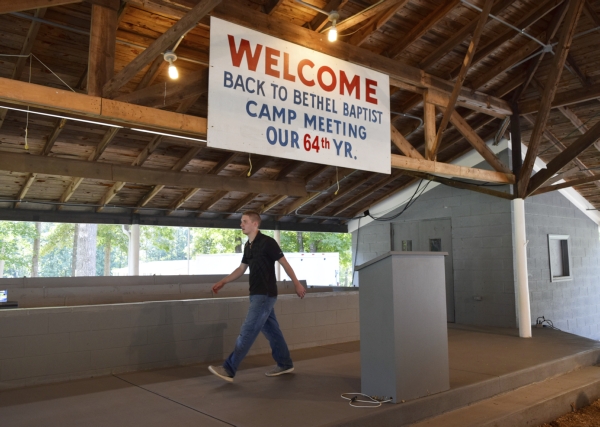 Josh Montgomery, pastor of Safe Harbor Baptist Church in Salisbury, has been attending the two-week camp meetings on Shue Road since he was 14. This year, the 25 year-old will serve as the event's moderator. Rebecca Rider/Salisbury Post

CHINA GROVE — By Saturday, the handmade pews are lined up and the sawdust floor of the Back to Bethel Baptist Camp meeting pavilion is swept clean. A work group came out in July to pull out the gray, wooden pews, which have served the camp meeting for decades, and to knock down wasps’ nests.

Josh Montgomery and members of his congregation from Safe Harbor Baptist in Salisbury worked over the weekend to give the pavilion’s pillars a fresh coat of paint and put the finishing touches on the grounds, which will host the Baptist camp meeting for the next two weeks. This is will be the meeting’s 64th year.

Back to Bethel was started in the 50s by a group of local Baptist pastors to help unify churches in the area and reach out to the lost. They met on the grounds of 875 Shue Road in China Grove towards the end of August, and they’ve been meeting there ever since.

“It’s kind of got a heritage to it,” Montgomery said.

Not much has changed since then, Montgomery said. The meeting is held under a permanent wood and cinderblock pavilion that’s equipped with lights and fans to keep the heavy summer air circulating, and there are new faces every year, but the preachers still use a King James Bible and the choir still sings the same old, familiar hymns.

And sometimes, simple is best.

Every night over the next two weeks, 300-400 people will jostle for a seat on the worn-in pews — some traveling in from Statesville and Troutman — to be encouraged.

Camp meetings serve a different purpose than a regular church service — for one, they help foster unity among local Baptist churches, who may not interact on a regular basis.

“We may not agree on every dot and cross every T the same way, but we believe in Jesus Christ,” he said.

There are some people he’ll see every year at Back to Bethel, so that the meeting almost becomes “like a family reunion.”

“There’s some people who wouldn’t come into a church,” Montgomery said.

But they may be attracted to the open venue of the camp and its atmosphere of worship.

And Back to Bethel was the place where Montgomery got his own start — he attended the camp for the first time when he was 14, and still remembers that first night with crystal clarity. He said the preacher went up to the pulpit and began flipping through his Bible — and then he began to sing. And kept singing. And people streamed towards the altar.

“He never did get to preach,” Montgomery remembers.

But it was an experience that was “life-changing.”

“It let me know that there’s a reality to serving God,” Montgomery said.

In the years that followed, Montgomery would meet people at Back to Bethel who would inspire him to become a pastor. Now, the 25 year-old shepherds Safe Harbor Baptist Church in Salisbury and brings his own children to the camp meetings.

This year, Montgomery will serve as the meeting’s moderator.

“I’m very honored to have a part in this,” he said.

Montgomery said he’s got a heart for the young people who often fill up the pews to the right of the pulpit, because he knows that being involved in a church can keep them out of trouble and impact them forever.

“You get them excited about Jesus and serving the Lord and it’ll change their lives,” he said.

This year, Montgomery said he hopes that revival happens, and that people will know that the Bible “isn’t just for our grandparents’ generation.”

The meetings start tonight at 7:30, and run every evening until Aug. 26. Montgomery said a collection is taken up to ensure that the camp meetings can run the next year, and the next and for decades to come.

“If Jesus doesn’t come back, we’d love for someone to stand behind that pulpit and say, ‘Welcome to the 100th camp meeting,’” he said.