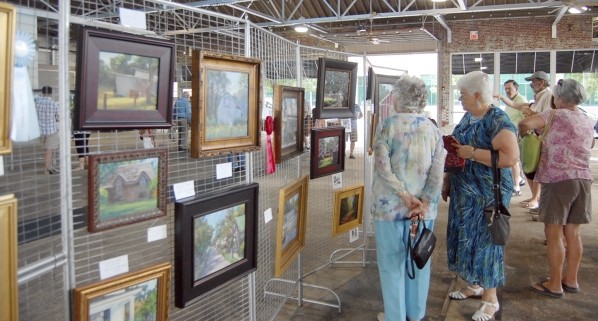 Amanda Raymond/Salisbury Post Artists and community members attended the artist reception for the NC Open Plein Air Paint Out event at the F&M Trolley Barn on Sunday. Forty-six artists from three states painted at 18 sites around the county during the event this past weekend.

SALISBURY — For the second year, Plein Air Carolina hosted the NC Open Plein Air Paint Out event over the weekend, ending with an artist reception at the F&M Trolley Barn on Sunday.

Phyllis Steimel, one of the event’s organizers, said they didn’t just want paintings from downtown Salisbury.

“We wanted to get people out in the county as well,” she said.

Last year’s event featured a three-day workshop before the day of painting. This year, organizers decided to replace the workshop with three full days of visiting the different sites and painting. Gold Hill was also added to the list of sites, which included Dan Nicholas Park, Dunn’s Mountain, the Bullhole, Sloan Park and the NC Transportation Museum.

Larry Ruddlech, an artist from Indiana, won the first-place $1,000 Sarah Kellog Award with his painting of an old stone building at South Main and Military streets.

He said that judging art is subjective, so he felt lucky to win. He actually painted at eight sites and had a hard time picking which pieces to submit.

Ruddlech said he has won art competitions before and he thinks it is because he paints more of the essence and feel of the location.

“I really think the reason I win is that I paint from the heart,” he said.

Ruddlech paints things like old junkyards and alleyways to display the beauty of simple things.

“You’re trying to wake people up to what’s beautiful in the world,” he said.

Boyle and a group of three more of his buddies came to the event together and painted at three sites.

His painting, “Gold Hill Cottage,” was the one that won.

It was his first time in Gold Hill, and Boyle said the town is a great place to paint.

“There’s lots of good subject matter for artists to take there,” he said.

Boyle felt humbled to win because many of the paintings were very well done.

“I feel very grateful because I feel like the competition was very stiff,” he said.

Dottie Leatherwood from Charlotte won third place with her painting at Dunn’s Mountain, called “Down a Quarry Road.” The $250 third-place prize was donated by Fine Frame Gallery.

“It’s always good to be recognized,” she said, adding that since different judges look for different criteria when it comes to evaluating art, the next competition would be like starting back at square one.

“This art thing is about people, not awards,” he said.

Leatherwood said she looks for scenes that she cannot pass by without capturing. For her, it is the love of art that drives her to paint despite the hot weather, bugs and other not-so-fun aspects of plein air painting.

The Dart: Back to Bethel: Camp meeting opens for…