Around the world on two wheels 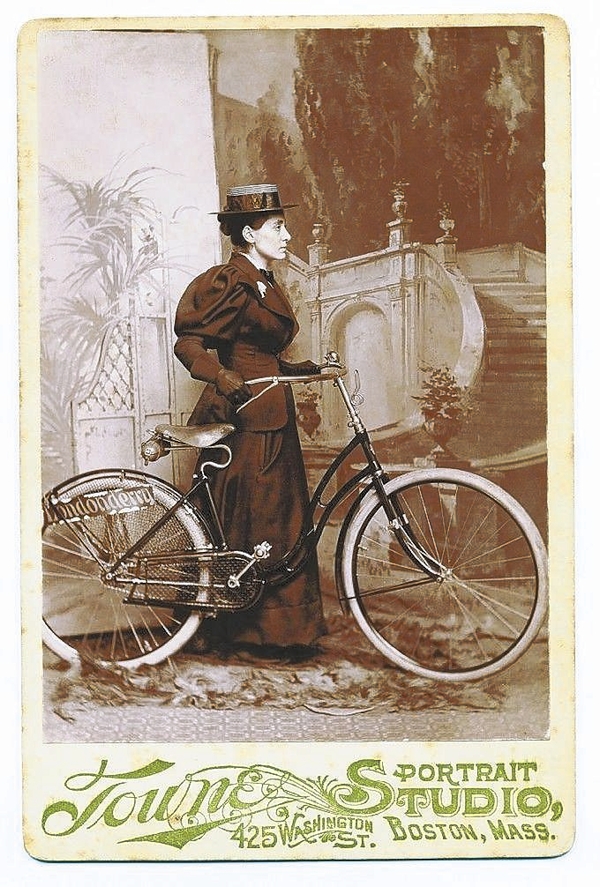 A period photograph of Annie Londonderry and her bike after her 1894-95 trip around the world.

One must congratulate David Freeze on his astonishing journey across the nation on the legendary Route 66.

Since I am a rabid bicycle collector of 1800-vintage wheels, I have been reminded of an earlier adventure …  a wonderful story of one of the most intriguing, off-beat, lost chapters in the history of the bicycle … the astonishing story of Annie Londonderry, who accepted a challenge to circle the globe on two wheels. This was to prove a woman could ride around the world on a bicycle, replicating a feat Thomas Stevens accomplished a few years earlier.

Did I mention Annie was a 23-year-old mother of three children and the year was 1894?

She rose to the challenge, as the story goes, to complete the trip in 15 months. Her journey intensified the argument about the equality of the sexes. It was not merely a test of her physical toughness and mental fortitude, but her ability to fend for herself in the world. If she succeeded, she was to win the staggering sum of $10,000 prize money.

A housewife working as a newspaper salesperson, she accepted the worldly challenge if only to escape her life in a run-down part of Boston with other family members living with her.

As she began the tour, none of the family wished her well, figuring that she must have been crazy to abandon them, especially since she was a novice bicycle rider. (She had never ridden a bicycle except for two or three lessons in the days before her departure!) The Atlanta Constitution noted “bicycling seems to have been a heaven-born talent with her.”

She began this trip on a 42-pound bicycle, with a revolver and a dream … dressed in typical Victorian fashion: a long dark skirt, a dark blue tailored jacket with billowing leg-o-mutton sleeves, a white shirtwaist with a striped collar, and a neat bowtie, dark gloves, and a flat-topped hat. The Boston Post noted “she was short and lightly built.”

Her real name was Annie Kopchovsky, but she changed it to Londonderry when a local water company handed her $100 for a sign attached to her bicycle’s “skirt guard.”

She began the trip on roads that ranged from smooth asphalt to grainy sand, averaging less than 8 to 10 miles per hour. These were the good roads for the remainder of her trip. Male and female riders escorted her along many stretches of her beginning journey.

With submarine cables across the world, news could travel within hours of this event that held the public in thrall. Both in the USA and France, she arrived with great fanfare. Newspapers filled the countries with news that Annie was in town … greeted by local bicycle clubs (that at that time were devoid of female members), feted by mayors and royalty. Unknowingly, Annie became a symbol of the “new woman of her age.” This ensured that people would take notice and in some cases contribute to the financial needs to help with her success. She sold advertising space on her bike and clothing, and made personal appearances in stores and at bicycle races, lecturing about her adventures along the way.

Annie began one of the greatest escapades and publicity stunts of the Victorian age! Until 1894, there were no female sport stars, no product endorsement deals, and no young mothers with “chutzpah” to circle the globe on a bicycle.

This story was able to emerge when her great-grand-nephew (Peter Theutlin) discovered that family rumors were, in fact, absolutely true. Apparently the story had faded with time and disappeared with Annie’s death in 1947. By researching newspaper stories from around the world, he confirmed this amazing offbeat tale. They wrote about her solo trip through many continents, exotic cultures, personal difficulties, triumphs, and a rousing reception upon her return to Boston (and her family) 15 months later.

I’ve seen copies of the world newspapers’ accounts with headlines of  “… Round the World-Riding a Man’s Bicycle . . . and Wears Bloomers.”

This tale of Annie Kopchovsky — aka “Londonderry” — would seem far-fetched for 1895, but it’s true … true … and true! She’s still a heroine 122 years later! It’s no wonder the bicycle and this story are given an enormous amount of credit for the emancipation of women around the world!

Buddy Farnan lives in Salisbury. You can find more information on Annie Londonderry at www.annielondonderry.com.