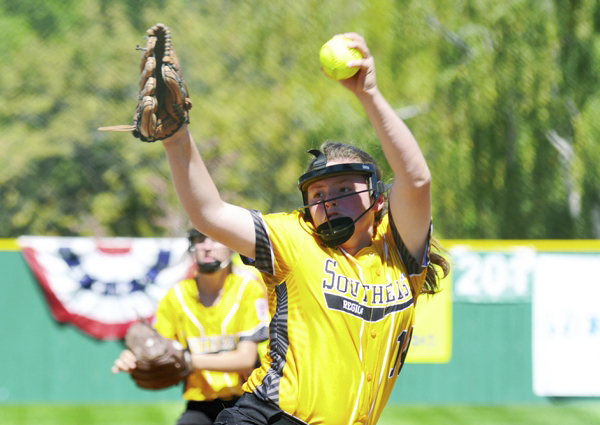 Photo by David Ball/for the Salisbury Post Rowan Little League softball pitching ace Taylor Walton prepares to fire a pitch during Monday’s 10-0 win over the Netherlands in the World Series. Walton pitched a no-hitter and at the plate, belted two doubles.

The Netherlands had nothing for Rowan County in the Little League Girls Softball World Series on Monday afternoon in Portland, Ore.

Nothing at all. Nothing, as in no hits or runs.

Rowan lefty Taylor Walton fired a no-hitter and struck out five batters in a four-inning mercy-rule 10-0 victory. The win moves Rowan, the 2015 World Series champions, into today’s semifinals, which will be televised live on ESPN2 at 7:00 (Eastern time).

Today’s game will be quite the showdown between Rowan and the East Regional champ, Robbinsville, N.J. Like Rowan last year, Robbinsville won the crown in 2014. The New Jersey has also represented the East in three of the last six World Series events.

Rowan won all four of its Pool B games prior to Monday win in the quarterfinals. Robbinsville was the second seed coming out of Pool A, after losing last week to Texas, undefeated in that pool.

But Robbinsville took care of the West Regional champion, Utah, 10-0, in Monday’s first game. Texas had the last game of the day, playing Canada.

“Robbinsville has a storied program,” said Rowan head coach Steve Yang. “They’re solid in all areas. They have a great pitcher like us but I like to think that we maybe have a little stronger defense than theirs, but a very complete team.”

Yang said that he believes too that his team has the experience of playing of national TV under their belts and can just concentrate of playing softball.

“We hope so,” said Yang. “Our kids are very loose and relaxed and having a good time, while the coaches work up a game plan for Robbinsville. We’re confident that can keep up their resilient attitude on the field to carry us on to the finals.”

Yang admitted that the Netherlands, winners of just one World Series game, was not the strongest of opponents. But Yang added that the European champs were probably the second-best international team in Portland, following Canada.

Rowan jumped on the Netherlands with three runs in the first inning before its opponent even recorded an out. Allison Ennis and Kary Hales led off the game with singles and both scored on Walton’s double. Another run scored on an error.

Rowan added four more runs in the second inning to basically put the game away. Hales doubled in Ennis and then Walton doubled in Hales to make it 5-0. Later in the inning, Tate Barger’s groundout brought Walton home and Kaylin Dowling’s groundout scored Ellen Yang from third base.

Three runs in the bottom of the fourth inning made it a walk-off win due to the mercy rule. Kenadi Sproul doubled in two runs, Bentli Meadows and Madelyn VonCanon, for a 9-0 lead and then Caylie Keller’s run-scoring single ended the game.

“We jumped on them early and that was good to see, because that’s what we haven’t been doing, scoring early” said Yang. “It was good to come out swinging the bats early. Netherlands’ pitcher was good and had a good fastball and our bats haven’t been very consistent here in Portland.”

But the key again was the steady performance of Walton in the circle. She only walked one batter and threw just 50 pitches in her four innings of work. At the plate, she threw in the two doubles and three RBI for good measure.

“Taylor’s pitching so well,” said Yang. “She’s getting a little stronger each time out and we’re just hoping she has something left in the tank. She’s a real competitor and I think she feels a little pressure, knowing the success (last year’s pitcher) Kali Morton had here last year.”

Yang added he and his assistant coaches, Rob Hales and Eric Dowling, have stressed to their team to relax and have fun and that win or lose, they are winners.

“It’s been a successful summer whether we win it or not,” said Yang. “It’s coming to an end, either way and that’s the sad part, that our time together, playing softball is almost over. But our core girls, the ones who were here last year, probably feel that anything less than winning it all, won’t feel right.”

NOTES: In a rare coincidence, both Taylor Walton and her brother, Brandon, who plays for the Rowan County American Legion team, will be on national TV at the same time today. While the Little League semifinal is on ESPN2 at 7:00, the American Legion World Series championship, featuring Rowan and Arkansas, airs on ESPNU at the same time. Kim Walton, their mother, is in Portland with Taylor. Alan, their father, is with Brandon in Shelby.