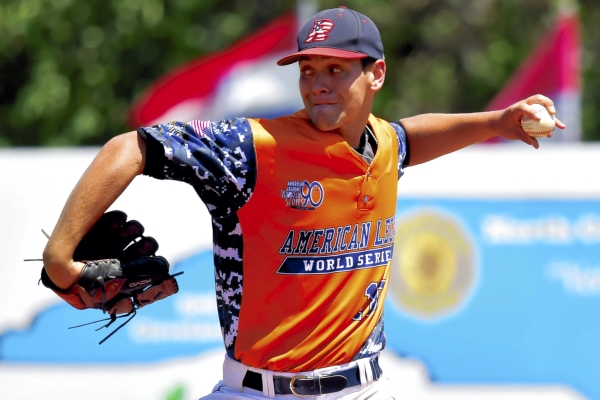 SHELBY — The breadth between Rowan County’s American Legion baseball team and a national championship has been narrowed to two victories.

Post 342 — a team that sported a pedestrian 10-7 record in mid-June — qualified for the World Series semifinals by adorning its Sunday best and eliminating Kennewick, Wash., 12-0 in eight innings yesterday.

“After today, we’re going to be one of four teams still alive,” coach Jim Gantt said at Keeter Stadium, where Rowan (40-13) secured second place in the Stripes pool. “Not a lot of people can say that.”

Rowan can, largely because winning pitcher Hunter Shepherd turned his second start of the season in a work of art. And because he was backed by a defense that turned double plays in the fourth, sixth and eighth innings and an offense that contributed 13 hits, methodically smothering the Northwest Region qualifier. Rowan will meet Stars pool champion California at 4 p.m. today.

“The game doesn’t know how big the game is,” said Shepherd, who worked with the calm of movie usher through seven scoreless innings. “To me it was just another ballgame. I just had to go out there and do everything right.”

Did he ever. Shepherd persevered under a blanket of heat and humidity, yielding four singles and inducing 10 groundouts in a 94-pitch effort. The tall left-hander crafted an exhilarating gift of a game, blending a fastball that looked swift and alive with a sweeping curve that kept Washington (54-17) out of step.

“He did everything a team in their position would hope for,” said losing coach Nate Holden. “He got his breaking ball over, he battled with his fastball and he got them to the semis.”

Shepherd (3-2) was more sturdy than spectacular, but his performance brimmed with small pleasures. He threw first-pitch strikes to only 13 of the 31 batters he faced, yet worked all four corners of the plate and frustrated Washington into drumming grounders across the infield.

“When he got ahead it was usually with his fastball,” said Rowan catcher Trevor Atwood. “But his curve and his location were both very good today. We’re always confident when Hunter is pitching like that.”

Rowan scored its first three runs against right-hander Andrew Townsend, then added a fourth against reliever Fabian Green in the top of the third inning. Brandon Walton lined a first-pitch delivery into center field for a leadoff base hit before Atwood — who went 3-for-3 and reached base five times — steered a one-out, hit-and-run single into right. One batter later, Rowan went up 4-0 on Tanner File’s RBI-single.

“That’s the way we have to play,” Gantt said after Rowan collected 12 singles. “We don’t have a lot of power, so our guys have to work the count, wait for good pitches to hit, put a hit here, lay a bunt down there. ”

That formula helped produce another three runs in the top of the fifth. Chandler Blackwelder’s sacrifice bunt set the stage for Shepherd’s run-scoring single and Lee Poteat’s RBI-groundout. Another run crossed on a Washington error.

By the sixth inning Washington had turned to Trent Sellers — the third of five pitchers used by Holden. Atwood effectively ended his three-inning, three-run stint with a scorching, ground-ball double down the left-field line. It was the game’s lone extra-base hit and plated teammate Jake Pritchard with Rowan’s eighth run.

“We just played our game,” Shepherd said. “After it’s done, that’s when you can look at the scoreboard. What’s important is we’re starting to play like Rowan County can play.”

Rowan made sure this one ended early by scoring its last four runs against reliever Andrew Vargas in the top of the eighth. RC batted around and got key hits from Poteat (2-for-4, 3 RBIs) and Pritchard (2-for-4, 3 runs scored). Lefty Brandon White spelled Shepherd in the bottom of the eighth, which ended when second-baseman File snagged a line drive and doubled a runner off first base.

“It’s down to single elimination,” Gantt said afterward. “We’re not gonna so much worry about winning and losing. We’re just going to enjoy being together.”