Night at the Museums allows visitors to interact with history 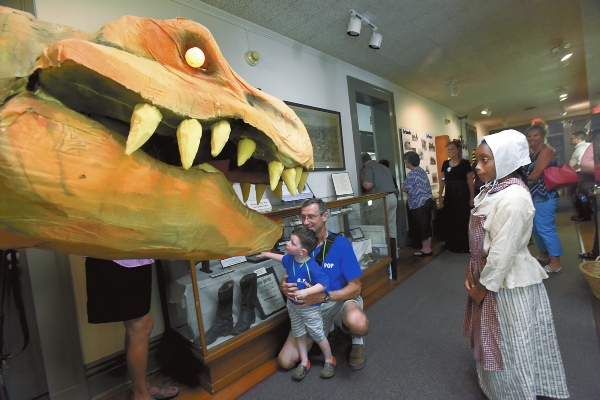 Character little Harriet Tubman (8 year old Aleiah Martin), Brad Pierce and his grandson Parker Moscardini meet the dinosaur at the Rowan Museum at the Night at the Museum event. photo by Wayne Hinshaw, for the Salisbury Post

SALISBURY — History came alive for a night at the Rowan Museum and Spencer Doll and Toy Museum on Saturday.

The two museums collaborated to host the second annual Night at the Museums event.

The event did not draw the crowd it did last year, but the museums were still full of visitors interacting with volunteers dressed up as historical figures.

The night started at the Spencer Doll and Toy Museum at 108 Fourth St. As visitors entered, Beth Ann Gilland dressed as a Cherokee chief and Hannah Duncan dressed as an Egyptian Pharaoh greeted them. They were given a “key” to the museum, which activated the magic that brought the historical figures to life.

Beth Nance, dressed as a security guard with an orange plastic gun stuck in her waistband, founded the Spencer Doll and Toy Museum with her mother in honor of her late sister Amy, who was an avid doll collector.

She said some characters imitated the ones from “Night at the Museum,” a movie from 2006 staring Ben Stiller and Robin Williams.

Other characters represented aspects of the museum’s current exhibits.

Visitors were able to talk with characters including Theodore Roosevelt, played by Steve Cobb, George Washington, played by councilman David Post, and Lord Badin Powell played by Chuck Bowman, all while dodging Caroline Nance dressed as a monkey who bounced around trying to steal people’s keys.

Allison Voss was visiting her grandparents and said her grandmother, Sandy Wagoner, thought she might like attending.

“I think it’s cool to see how generations before us have kept themselves occupied without electronics,” she said.

Wagoner said she told her granddaughter about some of the games and toys she played with growing up, but it was nice that Allison could actually see some of those things.

Kathy said they missed the event last year, so they made sure they were able to attend this year.

“I just think making history come alive is a fun time,” she said.

Angela said she enjoyed seeing all of the costumes that the volunteers wore.

Once they were done at the Spencer Doll and Toy Museum, attendees boarded the trolley to the Rowan Museum at 202 N. Main St.

Visitors were treated to a dinner before hopping back on the trolley to their cars at the Spencer Doll and Toy Museum.

Gray and Allison Wilson attended with their four children and Allison’s parents. They both said they enjoyed the event and all they were able to learn new things from the characters.

“…you learn (interesting things) about the town you may not have learned growing up,” Gray said.