Football’s back in LA after 22 years 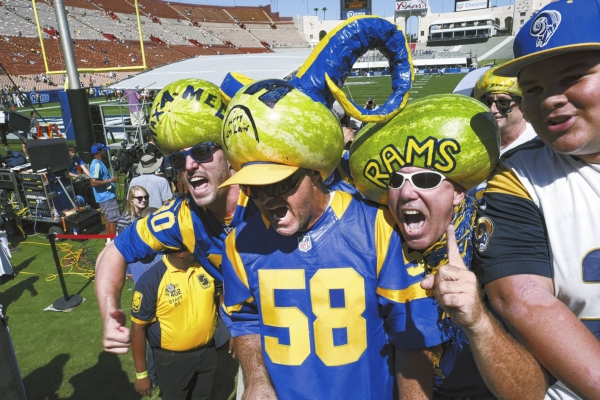 Los Angeles Rams fans cheer as they arrive at Los Angeles Memorial Coliseum on Saturday, Aug. 13, 2016. Los Angeles fans celebrate the return of the NFL and their long-lost Rams to the city at the team's first preseason NFL game against the Dallas Cowboys. (AP Photo/Richard Vogel)

LOS ANGELES (AP) — It was a preseason game with the electricity of a playoff game.

At least until the opening kickoff.

There was no Deacon or Dickerson, and the old familiar blue and yellow were replaced with St. Louis gold, navy and white, but the horns on the helmets were the same, and so was the name: “Ladies and gentlemen, it is time to welcome home to the LA Coliseum, YOUR Los Angeles Rams!” the announcer shouted, bringing a roar the local crowd hasn’t been able to let loose since 1994.

Even an opening kickoff return for a touchdown by the Dallas Cowboys’ Lucky Whitehead on Saturday in the preseason opener for both teams and the Rams’ homecoming game couldn’t kill the mood, and many late-arriving LA fans missed that anyway.

The Rams’ first touchdown in their new-old town, a 14-yard run by Benny Cunningham, brought the day’s biggest roar, as though it finally made the move official.

“Celebrating a new era of NFL football in Los Angeles, we deserve it!” yelled Rachel Barbosa, 40, tailgating outside the Coliseum, where the unmistakable smell of sausages and beer marking an NFL game day hung in the air.

Her tailgate-party partner Rose Gonzalez turned 41 on Saturday and the old-school Rams fan couldn’t believe she was getting such a sweet gift.

“Wouldn’t want to spend my birthday any other way,” Gonzalez said.

Rams jerseys from all eras of the team filled the streets and parks around the Coliseum, the Rams traditional home, though the gates and snack stands still bear the red and gold of the permanent tenant, USC. The Rams will play here while their permanent home is built in nearby Inglewood.

LA fans also had to face the other side of the NFL experience, which they hadn’t missed as much: Weekend traffic that felt like weekday rush hour, sky-high parking prices, and shouting matches with hardcore Cowboy fans.

And the city’s new Expo Line light rail train that stops at the Coliseum was as packed and sweaty as a subway train bound for Yankee Stadium.

But nearly everyone took it all in stride, and smiles abounded.

There might have been no one happier than Douglas Aziz.

“I moved here from Toronto in 1994 because I was a Rams fan,” said Aziz, who wore an old-school Deacon Jones No. 75 jersey with his long white hair.

“That was the year they left.” He had a gleam in his eye and an ear-to-ear grin at the thought of finally seeing his own team in his hometown 22 year later.

Aziz came to the game with his two young-adult sons, Cameron and Colin. Cameron has been a longtime NFL fan, but is now a newly adopted Rams fan and holder of many season tickets.

“I got eight!” he said, and he plans to hold on to them for decades to come. He sold the five he wasn’t using for this game for a total of $800, he said.

“For a preseason game!” he said in disbelief.

For other fans it was a return to old traditions.

Russel Nadel and his wife came to Rams games in the Coliseum in the 1970s, and to the teams’ games in Anaheim in the 80s and early 90s.

“We’ve been going to San Diego for games, to see the Chargers, because it was the best we could do,” he said.

But they never became more than lukewarm Chargers fans.

Today, they were overjoyed to give their full affection to a team again.

In the game, Dallas’ Dez Bryant caught a 10-yard touchdown pass, but the Los Angeles Rams earned a win in their homecoming when Sean Mannion threw a 9-yard touchdown pass to Aaron Green with 1:54 remaining for a 28-24 comeback over the Dallas Cowboys at the LA Coliseum on Saturday.

Bryant had two receptions for 28 yards, including a leaping catch on the sideline against cornerback Coty Sensabaugh for 18 yards. He played one series before leaving the game.

Murray, seeking a new start in Tennessee after struggling with Chip Kelly’s offense in Philadelphia last season, had six carries for 93 yards. Henry, the 2015 Heisman Trophy winner from Alabama, had 10 carries for 74 yards and a touchdown.

Titans quarterback Marcus Mariota played three series and went 5 of 5 for 45 yards, including a 31-yarder to rookie Tajae Sharpe. The Titans had a field goal on Mariota’s first series and capped his final drive with Murray’s touchdown.

He hit it running, passing and winning in a last-second rally that sure made for a splashy NFL debut.

Competing to be Russell Wilson’s backup, the rookie from TCU engineered a last-minute, 88-yard touchdown drive in four plays, connecting with Tanner McEvoy with a 37-yard scoring pass, and then handing the ball to Troy Pope for the 2-point conversion with no time remaining, lifting Seattle past Kansas City 17-16 Saturday.

Boykin, competing with veteran Jake Heaps, replaced Wilson after one possession and had some good and some not-so-good moments before getting going on the final drive.

The clock showed 0:00 when McEvoy out-positioned and out-jumped Malcolm Jackson in the end zone, bringing the Seahawks to within one point in a game they had trailed all day.