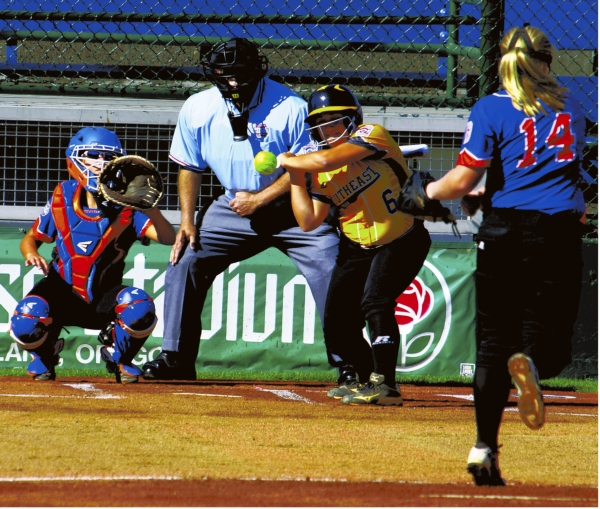 Rowan Little League manager Steve Yang believes his team has a huge depth advantage on most of the teams he’s seeing in the World Series in Portland, Ore.
Everyone plays, by rule, in a Little League game, and everyone on Rowan’s 14-member squad contributed to Saturday’s 16-2, five-inning romp against the Philippines.
Rowan moved to 3-0 in pool play.
“When most teams put their subs in, they drop off, but our subs have put a big spark in us,” Yang said. “Our lineup hasn’t been all that productive at the start of the games so far, but our subs have been getting us jump-started.”
Madelyn VonCanon entered the game in the third inning and walloped a triple over the head of the left fielder. She later smashed a double down the left-field line.
“She hit two very hard line drives,” Yang said. “She’s been a pleasant surprise.”
Bentli Meadows came off the bench to go 1-for-1 with two runs, while Kenadi Sproul drove in two runs after she entered the game.
Rowan pitcher Taylor Walton threw eight innings in the marathon win against Michigan on Friday, so Little League rules did not permit her to be in the circle on Saturday. Rowan still rolled, with Kary Hales pitching three innings and VonCanon hurling the last two. Hales fanned four and allowed one hit in three shutout innings. She threw 32 of her 51 pitches for strikes.
“We’d had a chance to see the Philippines play and we were confident that Kary and Madelyn could handle them,” Yang said. “Both girls did a great job.”
Rowan used three errors and hits by Hales, Walton and Ellie Wilhelm to take a 3-0 lead in the first inning.
Doubles by Allison Ennis and Walton made it 4-0 in the second inning, but Rowan couldn’t score in the third.
Rowan’s seven-run fourth inning ended any hope the Philippines (1-3) had for an upset. A triple by Hales and Walton’s second double got the big inning started.
Rowan finished with five doubles and two triples.
“We’ve seen some good pitchers here — not girls with exceptional speed, but good pitchers who have kept us off-balance,” Yang said. “But by the fourth, we were feeling comfortable at the plate.”
Rowan tacked on five more runs in the top of the fifth and stopped the Philippines in the bottom half for a mercy-rule win.
Rowan was credited with 15 hits, including three by Walton and two each by Jaden Vaughn, VonCanon, Ennis, Hales and Wilhelm.
Ellen Yang scored three runs.
Steve Yang said that defending champion Rowan will be declared a forfeit winner today against a Snow Canyon, Utah team that scored 41 runs in its first two World Series outings against Canada and the Philippines.
Utah manager Markay Thorkelson informed the World Series committee before the tournament began that her team, for religious reasons, would not play on Sunday. A majority of the Snow Canyon team members are part of the LDS (Mormon) faith, which asks members to “keep the Sabbath day holy,” avoiding work and play on Sundays.
While it would’ve been logical to schedule Utah’s World Series off-day on Sunday, officials apparently were adamant as far as not making any adjustments to the schedule.
Utah will still advance from pool play with a chance to win the tournament.
Rowan will finish pool play 4-0 and will be a No. 1 seed heading into the quarterfinal round.
Starting Monday, the World Series is essentially an eight-team, single-elimination tournament. Rowan’s 1 p.m. game probably will be against the Netherlands, which appears certain to be the No. 4 seed from the opposite pool.
“We haven’t played with as much spark as I want to see,” Steve Yang said. “But if we win Monday’s game then we’re in the semifinals on Tuesday and we’ll be back on national television. That’s plenty of motivation for everyone.”