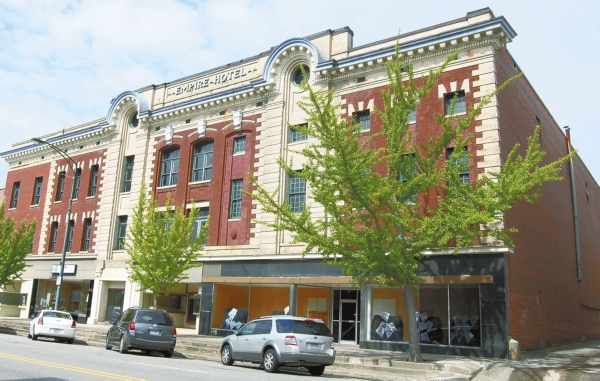 The Empire Hotel on South Main Street may be brought back to life. Post file photo

SALISBURY — Someone is planning to turn the lights on in the Empire Hotel at long last.

Historic Preservation Partners Holdings LLC, the developer that transformed the Loray Mill in Gastonia, has signed a purchase agreement for the Salisbury property with closing expected next year.

Downtown Salisbury Inc., which owns the Empire, announced the agreement during a Friday morning press conference at the Gateway Building. The agreement calls for the developer to pay $888,000 for the property, according to city officials.

“This has been a lot of work and a lot of heart for many, many of us,” said Paula Bohland, executive director of DSI.

William “Billy” Hughes, founding principal of Historic Preservation Partners, said the group has tentative plans to turn the old hotel into retail space and market-value apartments, including the retail space in the former Montgomery Ward main floor, mezzanine and basement.

Hughes estimates that the redevelopment will cost a total $20 million.

“I don’t have to tell you that it’s love at first sight,” Hughes said about the Empire Hotel. “That building is spectacular.”

Hughes operates out of Gastonia and specializes in redeveloping historic buildings in medium to small towns up and down the East Coast.

DSI anticipates a closing date in August 2017, after Historic Preservation Partners has done its due diligence.

The developer’s plans are fluid, and a consulting team will examine local demographics as well as areas for potential growth in the community before any strategy is finalized.

“Ultimately, what the project will be is still out there,” Hughes said.

Combined, the project would allow for approximately 29,000 square feet of retail space. Should the upper floors be turned into apartments, Hughes estimated the building could support 50 to 70 units.

The Empire Hotel, which occupies most of the 200 block of South Main Street, was built in 1855 by local attorney Nathaniel Boyden. It opened to the public three years later as a “first class hotel” on the heels of the railroad’s arrival in Salisbury. Then known as the Boyden House, the property also housed permanent residents throughout its 100-year operating history.

After years of substantial renovations and management turnover, the hotel finally closed its doors in 1963.

DSI purchased the hotel in 2007 from the Ragsdale family of Jamestown with the intention of stabilizing and developing the property. Seven local banks helped chip in on the financing needed to purchase the building.

“When we made that decision in 2007, the economy was flying high and the outlook for our plan could not have looked any more promising,” said Greg Shields, DSI board chair.

But then the recession happened. Shields said no one on the board anticipated that they’d own the hotel for nearly a decade. Until now.

Hughes first came to Salisbury in 2015 for a conference. He said he took a wrong turn coming off Interstate 85 and got lost — but he fell in love with the town, and said he remembers thinking that it had “good bones.”

Hughes said the project timeline tentatively sits at 26 months and should have plenty of opportunities for local contractors. It will take approximately 12 months to secure financing and approval through state and federal avenues, and an estimated 14 months for construction.

Some hurdles will have to be cleared first, according to a press release from Linda McElroy, the city’s public information officer.

“The Empire Hotel project is contingent upon the positive outcome of several factors such as a market feasibility study, financial feasibility analysis, planning review and community input,” McElroy said. “The developer is proceeding with an expectation that the sale agreement will close in August 2017, with groundbreaking to begin in 2018.”

Hughes, DSI officials and and Mayor Karen Alexander said they see the redevelopment of the Empire Hotel as the “cornerstone” for revitalizing Salisbury. Hughes said during the press conference that redeveloping historic buildings is estimated to return $8 to the town for every $1 spent.

Since it’s funded partially by historic tax credits, the project will have to be cleared by both the state Historic Preservation Office and by the National Parks Service, while simultaneously securing lending and equity partners. Hughes said the project did not yet have partners he could reveal publicly.

However, Hughes said the redevelopment firm has no plans of backing out.

“It is our full intent to see this thing through,” he said.